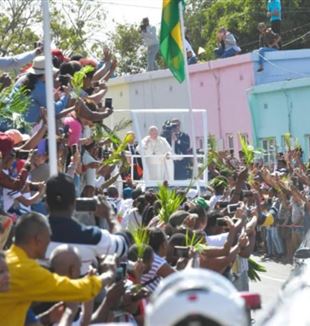 Pope Francis was among us only for only a short visit, but it was intense and charged with meaning. The Mauritians had prepared themselves for several months in order to welcome him, particularly in order to be ready to receive his message of peace and hope.
“Pope Francis- Pilgrim of Peace” was the motto of the visit to Mauritius, a country in which people of different cultures and religious have found themselves living together, as they are descendants of the first migrants who came from Europe, Africa, India and China.

Many people let themselves be involved, regardless of their origin, grateful for the Holy Father's decision to not only visit Mozambique and Madagascar, but also "a small island" like ours, testifying to his affection. Many people filled the streets and squares, which he passed by, animated by gratitude, eager to see him, even just for a moment, just as happened in Jesus’ time, waving palms.
The action of the Prime Minister, who is not Catholic, was also beautiful and significant: he declared the 9th September a public holiday.

Already in 1989, the year in which I married Leckram, who is a Hindu, and in which I arrived here, I was given the unexpected grace of the visit of Saint John Paul II. On that day, October 14th, we went together to mass at the “Marie Reine de la Paix” monument in Port Louis, a symbolic place dedicated to the Virgin Mary, whose statue "dominates and protects" the capital. A blessing for us, newlyweds!
Five months ago, when Pope Francis’ visit was announced, I felt a preference towards me. I was grateful that again, thirty years later, I would be able to welcome him and listen to his message.

This time, however, only friends of our community, which was born a few years ago and that is growing in affection for the charisma, in fidelity to the proposal and to the simple and spontaneous fraternity between us, went to the mass.
I, on the other hand, was unexpectedly asked to represent the Diocese by translating the Pope’s speech, that he would address to the authorities and civil society, from the national TV studios. I had to give up being physically with my friends and family, and at first this saddened me. But a friend wrote to me: "Congratulations, it is the Lord who asks this from you!”. Again I felt "looked for and valued" in the humble role I played to help make the visit a success.

Immediately after the Mass, which, thanks to God, I was able to follow on the screens, I received a message from Karen, a friend from my School of Community, who told me about the great joy of seeing the Pope-mobile and the surprise of having been interviewed by an Italian journalist. She was able to tell the journalist that it is the experience of the movement keeps her clung to Christ and the Church. Then photos and other messages, such as that of Tessa, who writes that she saw "a population" in prayer, together with the faithful of the nearby islands, from the early hours of the morning.

This communion lived "at a distance" with my parents and family made every moment of this visit more significant and, as a final gift, as soon as the Pope finished his speech, as I was translating in the studio, I was able to catch up with him and say to him in Italian: "Thank you, Holy Father! Have a good trip and goodbye!". I was again favoured, by the gaze of a Father which penetrates you because it is full of tenderness. I re-start everyday, certain that it is here, on this island of the Indian Ocean, that the Lord has wanted me to be a witness to His gratuitous love.