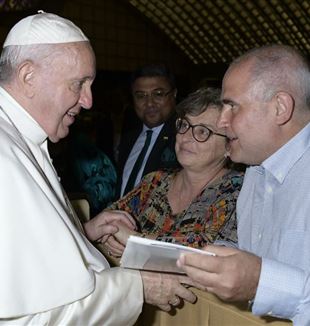 On Wednesday, 21 August, together with my wife Stella Maris, we had a wonderful meeting with the Holy Father, Pope Francis, during the General Audience. After catechesis and after having greeted the sick and newlyweds, he approached us. He was already quite tired, and yet he paused to greet each of us for a few seconds.

When he came to us and we gave him the catalogue of the exhibition "Gestures and words: Jorge Mario Bergoglio, an original presence", he stayed with us for longer, a moment which seemed eternal to us. I was able to tell him that we had organized the exhibition with about forty friends from both Argentina and Brazil, to help make him known in a truer way, compared to the distorted image of his that is often portrayed in the media. In this moment we saw that he moved, and then he told us that he was fully aware that in Argentina, and throughout the world, many resources are being used to scar the image of the Pope. He was very happy and grateful for our gesture.

We were able to tell him about the various presentations of the exhibition that have been made so far and we told him that we will continue to present the exhibition throughout Argentina and Latin America, working to reveal the greatness contained in the Mystery of his person. When he left, urged by the security service that was with him, my wife pointed out to me that he had not handed over the catalogue that we had given him to someone in his entourage, as he normally does, but he walked holding the catalogue tightly in his hands.
An infinite grace, a gift from God that we will carry in our hearts for the rest of our lives.