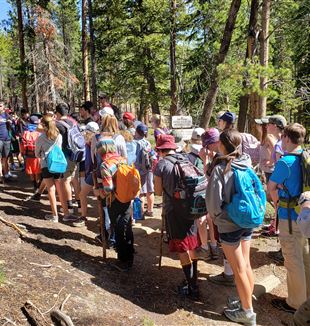 On the second week of June, the Venturers of the Stars spent five days together in Allenspark, CO. Venturers is a group of almost fifty middle schoolers who meet at Nativity Parish in Broomfield once a week with Fr. Accu and me. The weekly meeting consists of a moment of songs together, games, sharing about the gifts received from Christ during the past week, a moment of teaching, and a moment of prayer. Once a year, the majority of them commit to this community and to its rule through a promise to Jesus, made in the presence of Fr. Accu.

Every year we spend five days together in the mountains. This year other kids from New Mexico, California, and Wisconsin joined us. The theme was, “Who do you say that I am?” and the text we read with the kids every day was the speech that Saint John Paul II gave during the World Youth Day in Rome in 2000. The saint considers the event of Saint Thomas who puts his finger in Christ’s wound and is brought to recognize Him as his Lord and God. We invited the kids to pay attention every day to what happened and to recognize the Lord present.

The kids were very receptive and attentive in this work. From the games to hiking, they realized that Christ bestows His life upon us only if we are ready to sacrifice our own reactive ways of doing. The hike clearly exemplified that. The kids accepted with a generous heart the call to go through the strain required in order to reach the top, and they left aside burdensome and hindering complaints. The astonishing view of Longs Peak, still covered with snow, was the surprising reward that God prepared for us that day.

The kids’ judgments were collected during the daily moments of sharing in small groups and during the final assembly. One of the kids acknowledged in his own experience how worthwhile it is to give up our own way of dealing with things and to accept the challenges that Christ gives us. He reported that he usually tends to show off. This time, instead, he gave credit to Christ’s invitation to leave aside his self-centeredness, and he decided to open himself up to the relationships given to him. He lived better throughout the day. During the hike, he was caught taking care of many other kids, helping them go through the wearing snow that was found on the trail.

The games also turned out to be a great moment for the kids. It was a chance of joy and fulfillment in pursuing the same goal; a chance to get to know themselves and each other better; a chance to follow someone else’s prospective by accepting the challenges given by the rules and by following the strategies outlined by the team leaders. As part of the games, we invited each team to choose a passage from the Gospels and write a script that included memorable events that happened throughout the vacation. Each team worked hard and with creativity. It turned out to be a fun moment of memory on what we lived and received during the whole vacation. 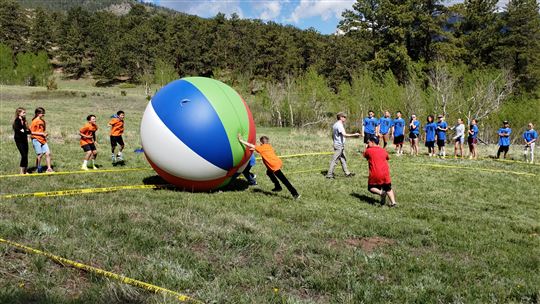 Throughout our time together we also introduced the kids to the lives of the saints. Professor Damian from California gave a presentation on the life of Saint Junipero Serra. We were accompanied through the steps Serra took from Mexico to California in order to announce Christ to the indigenous people. We relived the hardships and joys he went through in order to follow God’s will. Fr. Accu presented the life of Chiara Corbella Petrillo, servant of God, reading excerpts of her biography, A witness to Joy, and playing the video of the witness she gave in Italy after the birth and immediate death of her first daughter. This presentation raised a lot of questions and interest among the kids, who were fascinated by her intense way of living and her relentless embrace of the will of God.

We also invited Sr. Eleonora to give a witness on her vocation. She lived in Broomfield for three years and helped with Venturers for two. The kids were moved by the story of her vocation, especially by the part in which she described her middle school experience following friends who invited her to join something similar to the Venturers.

On the last day we prepared a special moment for the eighth graders: a sunrise hike to the closest mountain top. This exclusive event was meant to invite them to GS as the place where they can keep living and deepening their friendship with Christ and with his believers. From the hiking to the speechless wonder before the sun peeking through the providential crack of clear sky among the clouds, all this beauty experienced in this event filled us with silence and helped the kids open their hearts to answer to His question: “So, who do you say that I am?”