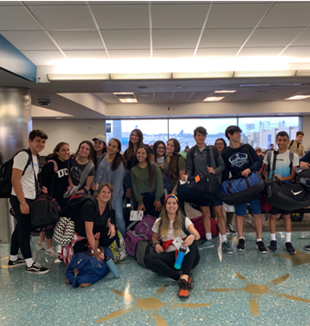 Ninety students. Two hikes. Countless games. Beautiful singing. Another GS vacation is in the books for Miami. This time, we joined up with the East Coast GS communities from New York, Washington, D.C., Boston, Philadelphia, South Carolina, and North Carolina. We spent five days camping in Table Rock, South Carolina. It was beautiful. There were bugs everywhere. There were ginormous bees. There were bats in our meeting and dining pavilion. It was hot. Students cried during the hikes. The wind blew the canopy off part of our tent and so when it rained, our sleeping bags got wet. It rained on the day we were doing a barbecue for dinner. Four students got sick and had fevers. I spent half a day driving one to a medical clinic out of fear that he had strep throat. What more could one ask for? Nothing more. How is it possible that the vacation described above would leave the adults saying, “How beautiful!” and the students saying, “I want to come back next year!”?

If I had to sum up my experience at the GS Summer Vacation 2019, I would have to say that it was all I had hoped for, and more. The days leading up to it had me a little anxious about the hikes because it was something that I really wanted to do, but I couldn’t escape the reality that I have bad knees and a recently sprained and fractured ankle. But I was also anxious about my students’ reactions to the hikes, the morning prayers, the lessons, and the sleeping in tents with “strangers.” What would they think? Would they like it? Would they be miserable? Would they ever come back to School of Community after this? At the same time, I was excited for what was to come. After my experience on the GS Pilgrimage of a couple of years ago, I knew that the struggles would be worth it, at least for me. I hoped that would be the case for my students as well. I find myself taking the risk of inviting the students despite my fears because I have such a great desire that they too find what I have found, that they too see how beautiful life can be when we walk with Him together.

On the first night they were divided into tents and were not happy because they were all separated. My fears were confirmed, they were not happy. But I hoped it was temporary and that they would get over it and meet new people. As the days went on and we played games, went on hikes, sang songs, and listened to the morning introductions, I could see them struggling, yet opening up and enjoying it.

In the end, my hopes were realized as they shared at the final assembly. One of my girls said she was miserable at first and wanted to go home, but as the time went on and she opened herself up to the experience she found herself having fun and really liking it. She said she had no doubt that she was leaving having been “marked by Christ.” Another student who just graduated and is leaving to college in Houston said she realized that our community doesn’t only live in Miami. She knew it, but she realized the real meaning of community and therefore knows that wherever she goes, she is part of that community. She also said she now knows that she needs to take an active role to search for what she is desiring because it won’t be “as easy as going to D104 [my classroom] after school.” After we said our goodbyes and left on our bus to the airport, I sensed that they still had something to say so I continued the assembly on the bus. A student who is quite shy thanked me for having invited him because he met so many nice people and really felt like he belonged there. He was moved when we all sang him happy birthday because he felt like everyone there really cared about him. He felt like he was “truly a part of this community” that he had just met. Another one shared that she always struggles with trying to understand what she truly desires but after the student witnesses, she understood that although she doesn’t completely understand what “it” is, she desires what those students had, the way they were living their lives. And finally, one of my students who was the most miserable, who I thought would never come back to School of Community after this trip (or maybe never even speak to me again!), said that although she really hated it the first few days, she realized that she was there and had to change her attitude because she was miserable. She too was moved by the student witnesses and realized they were living something more than what she was living, and she was leaving with the desire to search for that something more. I was in tears every time one of these students spoke because I was so moved in seeing the improbable happen right before my eyes. It was clear to me that they had encountered something—Someone--even if they weren’t too sure of what or Who it was.

This vacation wasn’t just about them though. I too took many notes and felt the beauty of the community that I am fairly new to. We sang the recessional song, “La Strada,” and after singing the first few words, “É bella la strada per chi cammina,” I broke down and started crying. I could barely sing. It was an understanding that all my fears, all my concerns, all my hopes, and all my joys were all a part of this beautiful road that God has led me to. I will continue to invite and take risks because when one has found something beautiful, they desire to share it, but also because I want to continue to walk this “bella strada!”