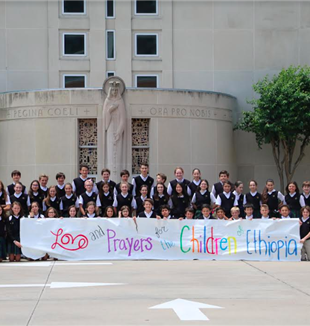 This year when I attended the New York Encounter I was encouraged by my friend Matt from Boston to attend the presentation on The Blue Tent! I was very surprised to discover how this presentation would follow me back to my school in Houston, TX.

As the school counselor, each Lent I invite the sixth-grade students to reflect on ways God is speaking to their hearts and how they can respond to God by living out the corporal works of mercy. This year during our class together I told them about the event in New York where I encountered an Italian nun who shared her story: she wanted to be a fashion designer, but God called her to the convent and then to be a missionary sister. I told the students how Sister Laura Girotto, upon arriving in Ethiopia, had no place to sleep except a blue tent, and about how she was so moved by the the plight of the children in Ethiopia where one in ten kids dies under the age of five. Sister Laura’s hope was to raise funds to build a hospital.

My students were struck hearing this story, and they realized how blessed we are to be living in a city surrounded by so many medical facilities. Together they asked how they as sixth graders could help the children in Ethiopia. At this time, some of the students weren’t even quite sure where Ethiopia was located, but when we broke for Spring Break, news on the tragic airplane crash in Ethiopia spread around the globe. When they returned to school they were more convinced that their hearts were moved to help raise funds for the hospital in Ethiopia.

This proposal drew them to ask more questions about the work of Sister Laura, what the New York Encounter was, and how all of this affected their lives. They set out to involve the whole school, hoping they could make a difference. They decided they could help with prayer every day and then, in a more tangible way, they set out to raise money through bake sales. They were given four Fridays to sell their baked goods during the lunch periods at school. To their amazement, some of their best customers were the younger children in our school. These children told them there were places in Houston for them to go when they were sick, and they wanted the same for the children in Ethiopia. During their time fundraising, the sixth graders grew even closer with each other because they overcame obstacles together when working and managing their own the bake sales. I kept a close distance and, as time passed, I could see their frustration decrease and their enthusiasm increase. At the end they raised a total of $2,000. One sixth grade boy even asked if we could do this again next year. When we took time to evaluate their proposal for this charitable work it was evident how Christ spoke to their hearts and how they listened!