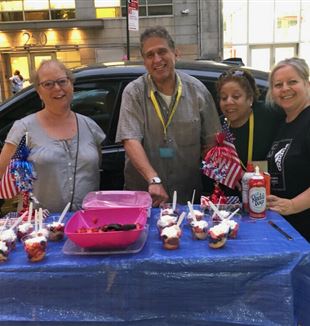 I often bring my students to meet the homeless outside Newark Penn Station and to offer them food. I always remind them to shake people’s hands and ask them their name because this is not an assembly line. I stress that we aren’t throwing food at people so we can feel good about ourselves and run away, we are going to encounter people, each with their own story, desires, fears, and destinies. My pep talk does little to alleviate their sense of the awkwardness talking to strangers who often smell bad and speak incoherently. I try to lead by example, being the first to introduce myself to the people we meet and ask them how they’re doing.

As much as I am curious to know the person in front of me, I feel the same sense of timidity that my students feel. My timidity comes less from the fact that the person smells or seems weird. Rather, I’m afraid that I won’t know what to say to the person--that besides a small bag of snacks, I don’t really have anything to give them. Subconsciously, I try to keep these encounters short to avoid them getting too uncomfortable. Although I want so much to be free with these people, to be able to look them in the face without drawing away, I pull back so impulsively. So I began asking myself why I couldn’t be free with them.

At the same time, I had heard several times that our friend Salvatore in the New York community started a mission for the homeless. His mission is less about providing food and services to them, but rather about offering friendship and an opportunity for companionship. After hearing him talk about his experience, I was amazed. He was so free to stay with the homeless in this way, and I wanted to know why. I was so attracted to the way he engaged with people, without any agenda or false sense of altruism. I decided to start following Salvatore so that perhaps I could start to see what he saw.

After telling my mother about Salvatore’s charitable work serving food outside a homeless shelter in midtown Manhattan, she decided to join us as well. We set up two tables, one for food (hearty, homemade penne bolognese) and drinks, the other for clothing, toiletries, and rosaries.

As people came up to get their food, some stayed for conversation, others went back in line to wait to get into the shelter. Hearing these people’s stories made me question the many well-intentioned attempts people make to “eliminate” poverty. Surely, it’s a nice idea, but when you get down to the complicated realities of people’s lives, their suffering--whether economic, mental, or spiritual--can’t always be eliminated or fixed. Each person’s history, their freedom, and their hearts, are a mystery to me, and these mysteries cannot always be calculated perfectly into government programs nor even into our plans of good-will.

This made me reflect on the School of Community, Morality: Memory and Desire. Fr. Giussani challenges the moralistic reduction of Christianity which would have us attempt to “fix” our limitations so as to make us adhere more closely to the ethical proscriptions of the Church. Instead, these limitations are what keep me in relationship with Christ. Were all my flaws to disappear somehow, I would no longer recognize my need to depend on Him.

Attending this charitable work has helped me let go of my grand plan to fix all of my flaws, and instead to learn how to beg--to ask Christ to meet me where I’m at and to love me as I am.

I’ve started asking friends and family members to donate clothes for us to hand out outside the shelter. The last time we went, my mother and I brought a big box full of clothing from my cousin and my grandparents. I brought my rain jacket (which I’m very much attached to), knowing it was supposed to rain later that evening. I put it beside the box. As people came to sort through the clothes, one man asked me what size the jacket was.

“I like that, it’s very nice!” He said, as he continued to sort through the box.

I put it on, feeling a little possessive. As he passed by again, he commented, “Very nice!”

I considered whether I really needed the jacket. As the moralistic thoughts weighed heavily on me, I thought back to my fears of engaging the homeless while with my students. In The Meaning of Charitable Work, Giussani asks, “What is the real need of another? ... What the other person truly needs I do not know, I do not measure, I do not have.”

I’ll probably never have the “right thing” to say or give to the homeless. I’ll never be able to erase my fears or fully live out my desire to understand the suffering of the homeless. All I could do was recognize that in that moment, that man liked my jacket. I liked it too, and offering it to him would be one way to share something of myself with him.

This is how Christian morality works. Not by trying to be good, fixing our flaws, or making the world a better place. Instead, it starts by responding to the promptings of Christ in the flesh: Will you acknowledge Me? Will you say yes to what I put in front of you? Even the smallest yes, the smallest acknowledgement of Him in my work and in my relationships with others, is enough to generate something new.