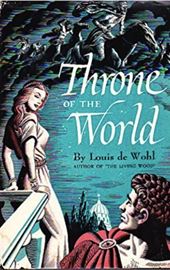 Throne of the World is a dramatic novel of the triumph of religion over force, a thoroughly modern treatment of the high intrigue, romance, and ruthless adventure in the time Attila and his hordes as they swept down into Italy from the "roof of the world." It is a full-color picture of fifth-century Europe, with its barbarians, its incredibly courageous Christians, its world-weary Roman aristocrats, its political and amorous plots and counter-plots.
Prince Etel, later dubbed Attila - "little father" - by the many Hun tribes, is rough, masculine, arrogant. When he wants power, wealth, women, he seizes them - including Princess Horonia, whose subsequent life in banishment provides a counter-plot finally weaving in with events on the main stage. And when the time comes to launch his myriads of wild horsemen against the Roman world, Attila does not hold back. At the head of a half-million, he rides into Italy.