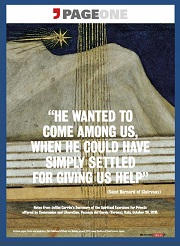 "The more time goes on, the more I am struck by the truth of Fr. Giussani’s words about the importance of circumstances: they are not something secondary, but are essential for understanding– we can say concisely–the nature of Christianity (cf. L. Giussani, L’uomo e il suo destino [Man and His Destiny], Marietti 1820, Genoa, 1999, p. 63). We find this perception in those who are most conscious of what is happening. Someone recently quoted a famous text by Joseph Ratzinger written in the 1970s on the phenomenon of atheism, which Ratzinger perceived as a call for Christians to live a more aware faith: “In relation to the modern pagans, the Christian must know that their salvation is hidden in the grace of God, on which his own salvation also depends; he must know that concerning their possible salvation, the seriousness of his own faith is indispensable; their lack of faith must urge him to a fuller faith, because he knows he is involved in the function of representing Jesus Christ, upon whom the salvation of the world depends, not just that of Christians” (J. Ratzinger, “The New Pagans and the Church,” in Il nuovo popolo di Dio. Questioni ecclesiologiche [The New People of God, Ecclesiological Issues], Queriniana, Brescia, 1992, p. 362). [...]