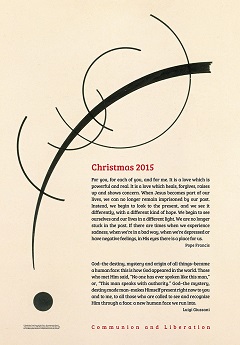 Each year, Communion and Liberation chooses an image to help us enter into the Christmas mystery.

“It is like a block of ice with a burning flame inside.” This is what Vasily Kandinsky wrote in 1925, the same year in which he produced this drawing of ink on paper,today conserved at the Metropolitan Museum of Art in New York. Fifteen years had passed from his first famous abstract watercolor of 1909. The appearance of Kandinsky’s art had become colder and more calculated: these are the years in which he taught at Bauhaus, the well-known German school of architecture and design tied to rationalism and functionalism. He also wrote an essay on artistic theory entitled, Point and Line to Plane. This drawing is the perfect exemplification of his intent: to express in a clear and pure way a dynamic that is fully real and human. This dynamic is the attraction exercised on the line (our life) by a point(the Other,the unexpected Guest). Something in Kandinsky’s representation, inasmuch as it is dematerialized, produces, as he, himself wrote, “a vibration of the heart.” Perhaps the curves that accompany the trajectory could be read as the representation of this vibration...
(Giuseppe Frangi, December 2015)


The text consists of two quotes. The first, by Pope Francis, is taken from the speech at the Center for Rehabilitation Santa Cruz - Palmasola. Santa Cruz de la Sierra (Bolivia), 10 July 2015.
The second quote, by Luigi Giussani, is based on the book The Christian event, BUR, Milan 2003, pp. 14-15.
Here are two quotes:

"For you, for each of you, and for me. It is a love which is powerful and real. It is a love which heals, forgives, raises up and shows concern. When Jesus becomes part of our lives, we can no longer remain imprisoned by our past. Instead, we begin to look to the present, and we see it differently, with a different kind of hope. We begin to see ourselves and our lives in a different light. We are no longer stuck in the past. If there are times when we experience sadness, when we are in a bad way, when we're depressed or have negative feelings, in His eyes there is a place for us. "
(Pope Francis)

"God- the destiny, mystery, and origin of all things-became a human face: this is how God appeared in the world. Those who met Him said, "No one ever spoken like this man" or, "This man speaks with authority." God-the mystery, destiny made man-makes Himself present right now to you and to me, to all those who are called to see and recognize Him through a face: a new human face we run into. "
(Luigi Giussani)