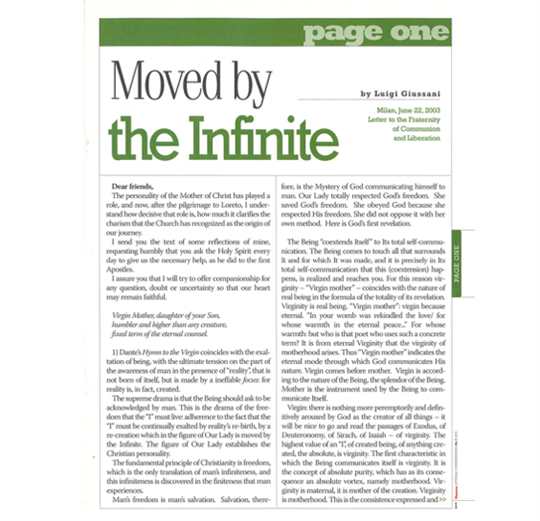 Dear friends,
The personality of the Mother of Christ has played a role, and now, after the pilgrimage to Loreto, I understand how decisive that role is, how much it clarifies the charism that the Church has recognized as the origin of our journey.
I send you the text of some reflections of mine, requesting humbly that you ask the Holy Spirit every day to give us the necessary help, as he did to the first Apostles.
I assure you that I will try to offer companionship for any question, doubt or uncertainty so that our heart may remain faithful.
Virgin Mother, daughter of your Son,
humbler and higher than any creature,
fixed term of the eternal counsel.

1) Dante’s Hymn to the Virgin coincides with the exaltation of being, with the ultimate tension on the part of the awareness of man in the presence of “reality”, that is not born of itself, but is made by a ineffable focus: for reality is, in fact, created.
The supreme drama is that the Being should ask to be acknowledged by man. This is the drama of the freedom that the “I” must live: adherence to the fact that the “I” must be continually exalted by reality’s re-birth, by a re-creation which in the figure of Our Lady is moved by the Infinite. The figure of Our Lady establishes the Christian personality.
The fundamental principle of Christianity is freedom, which is the only translation of man’s infiniteness, and this infiniteness is discovered in the finiteness that man experiences.
Man’s freedom is man’s salvation. Salvation, therefore, is the Mystery of God communicating himself to man. Our Lady totally respected God’s freedom. She saved God’s freedom. She obeyed God because she respected His freedom. She did not oppose it with her own method. Here is God’s first revelation.
The Being “coextends Itself” to Its total self-communication. The Being comes to touch all that surrounds It and for which It was made, and it is precisely in Its total self-communication that this (coextension) happens, is realized and reaches you. For this reason virginity – “Virgin mother” – coincides with the nature of real being in the formula of the totality of its revelation. Virginity is real being. “Virgin mother”: virgin because eternal. “In your womb was rekindled the love/ for whose warmth in the eternal peace...” For whose warmth: but who is that poet who uses such a concrete term? It is from eternal Virginity that the virginity of motherhood arises. Thus “Virgin mother” indicates the eternal mode through which God communicates His nature. Virgin comes before mother. Virgin is according to the nature of the Being, the splendor of the Being. Mother is the instrument used by the Being to communicate Itself.
Virgin: there is nothing more peremptorily and definitively aroused by God as the creator of all things – it will be nice to go and read the passages of Exodus, of Deuteronomy, of Sirach, of Isaiah – of virginity. The highest value of an “I”, of created being, of anything created, the absolute, is virginity. The first characteristic in which the Being communicates itself is virginity. It is the concept of absolute purity, which has as its consequence an absolute vortex, namely motherhood. Virginity is maternal, it is mother of the creation. Virginity is motherhood. This is the consistence expressed and reached by the Being: perfection that has virginity as its bright spot, the warmth of virginity, the wealth of motherhood.
Our Lady is the method we need for familiarity with Christ. She is the instrument that God used in order to enter into man’s heart. Dante, the greatest poet of our lineage, creates a Marian theology unlike anyone else has ever done. Either you feel Dante’s first three lines growing in your heart or else these become a rock that crushes you. The Mystery from which creation proceeds, is sustained, and is brought to completion, is Our Lady. “Virgin mother, daughter of your Son”: this verse indicates the total meaning of creation as acceptable to man, that is, offered to man. Thus in Mary’s womb, the creator Spirit, the evidence of the Spirit, surfaced.
“ Fixed term of the eternal counsel”: this is the word that defines the nature of the things that are. In its definitiveness it is the expression of God’s creative power. That “fixed” is not a block to Mary’s freedom, because the fixed term is a suggestion that comes from the Eternal that confirms God’s work. Thus the first part of Dante’s hymn is the exaltation of the Eternal. What has to be rekindled in our hearts and in the hearts of believers is love for Christ, for Christ who is the eternal counsel. Everything belongs to the Eternal. Fixed term of the eternal counsel: this is the final plan, the first and final plan of creation. It is an eternal counsel. It is something that resonates. It is something that is called eternity.
As I reasoned over the Pope’s letter for the twentieth anniversary of the Fraternity, this point became clear to me: the Holy Spirit is the eternal counsel’s ultimate providential realization. It is the fixed, definite point of the Spirit’s creation, of God’s genius.
“ Counsel” is to perceive the infinite, unreachable, invincible dimension of the Holy Spirit. This reveals the reason that justifies the method of Incarnation. Without this passage the Mother of Christ cannot be understood.
All this cannot appear to man except as the supreme method of God’s freedom. God’s freedom is the infinite power that fixes – sets firm – the Spirit’s work before man’s eyes: Veni creator Spiritus, mentes tuorum visita (Come Creator Spirit, visit the minds of your people).
You need to read these things humbly, because God destines you for eternity. He makes you eternal, because He destines you to understand who you are, and this happens in the infinite spaces of time.

2) The person, the “you” of the person, is the place of guaranteed generative nobility, through the continuous awareness (always superior to itself) of the great promise that dominates all the action of the Spirit. God creates man and represents desire’s invasiveness. It is a desire without end, for us it is like the fire of an infinite dynamism compared to a temporary source. God is the measure of desire’s invasiveness because God is the measure of desire. Only by keeping God in mind can one realize that what he has within him is a limitless source.
This means that the Spirit arouses in man the word, the plan that defines him. This word, therefore, coincides with a missionary power. In other words, it comes back, like a ball into your own court, as a provoking challenge.

3) The totality of the person’s commitment makes “one”, a “unicum”, what would be a provisional participatory light: the final eternal formula of the loving Mystery, the vertiginous dramatic experience into which the “you” plunges, deep inside all things, in a cosmic embrace.

4) Love is, therefore, the formula for participating in what would remain purely ephemeral.
Spiritus est Deus, The Spirit is God, but the Spirit of God is love: Deus charitas est (the essence of the Trinity are the Three who love each other). The essence of the Being is love, this is the great revelation. Thus the whole moral law is totally defined by the word charity.

5) Charity shines out therefore as the only form of morality, which appears as an ecstasy of hope, inexhaustible hope. “You are a living fountain of hope”.
Hope passes as a light into the eyes and a fire into the heart of that Being who defines the reward of human expectation. It is not a prize given because the “I” is good, but because the “I” lives the ecstasy of hope.
Hope is a lively, joyful formula and in its impetus, in the purity of its content, it dictates the image of the whole of humanity: charity as the form of morality.
Like when Jesus met the rich young man: “Go, sell all you have and come, follow me!” Since those words were the form of morality, the boy did not have much strength and did not follow Him.
All that happens is grace, and all grace is in that “You” in which the fulfilment happens.

6) In the human heart, from mercy to forgiveness and to richness without end, joy thickens as a boundless light that ensures the intensity of creative goodness.

7) Human “music” is the stage on which everything happens: and the Mystery becomes the human people and the “choir” of the Infinite. Thus Christian personality is emphasized: you get up in the morning to go to Mass, to go to the doctor, to go to work, for your children... you get up in the morning for an explosion inside you of the fact of Christ!
Greetings to you, your families and your communities.