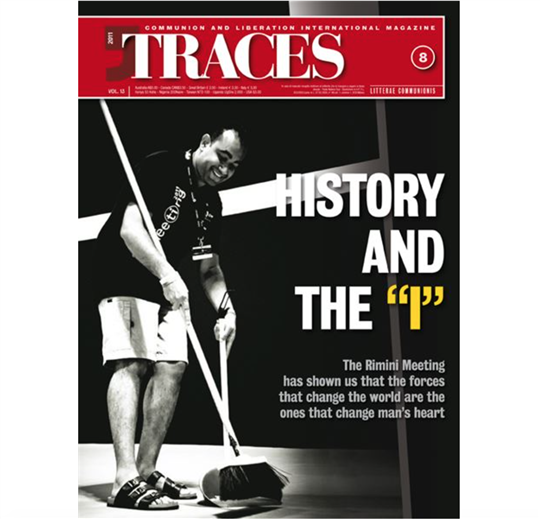 This year, the Rimini Meeting was impressive, because of the visit of Giorgio Napolitano, President of the Italian Republic, and his hard-hitting speech; because of John Elkann, young President of Fiat, speaking about himself openly with his Chief Executive, Sergio Marchionne, in the audience, later saying to journalists, "In Italy, many talk. These people do." It was because of those real dialogues on the Arab Spring in which Christians and Muslims said, "Here, we can speak to each other even better than at home." It was because of many other facts, both great and small, that showed how the Meeting of Rimini, together with the experience that gives it life, is a phenomenon which marks society. As we look back on the ten years since the cataclysmic events of 9/11, knowing history was altered forever, we look closely at those forces at work in Rimini, as these are the hope for modernity.
The Meeting has influenced history, to the point of pushing certain observers to come to grips with their own loyalties and even to change their tone. Thus, we have seen a major Italian newspaper, la Repubblica, often inclined to view the Rimini Meeting–and Communion and Liberation–in a purely political light, write that "whoever spends a few days here has to admit that none of this would exist if not for a surprising capacity for mobilizing consciences, for sincere intimate engagement." They even went so far as to suggest that perhaps it is necessary to stop asking, "Whose side is CL on?" and conclude that "CL, as always, is only on the side of CL."
It is more than a change of opinion. If you look closely, there is a question within those words that lies in our own hearts, if we do not wish to change the method and start down the wrong path. These facts are indeed impressive, yet what made them possible? What causes a phenomenon like Rimini, a phenomenon born more than 30 years ago over pizza among friends who only wished "to do something nice to show everyone what we are living," to grow into something like this? Is it partisan politics or the support of powerful patrons? Or is it perhaps strategies, lobbying, back-room dealings? What is the source of this ability to impact history?

We left off at the beginning of August with the suggestion to use vacation time, free time, as the time for discovering the urgency of personally verifying the faith. Because–we said–I am the one who has to face life's demands, not some group. And only the presence of Christ draws me, makes me certain, changes me. And changing me, He changes the world. Now we can also re-read the impressive nature of the Meeting in Rimini–or of other facts discussed in this issue of Traces (like the reports from those who were at the World Youth Day in Madrid)–in light of the same challenge. We can see whether or not it is true that even such impressive events spring forth, simply, from this point: from people who have been changed. It comes from hearts reawakened by the presence of Christ in the world, and so attracted–"intimately engaged," to quote a phrase from la Repubblica–as to let themselves be taken hold of, and to follow. In a word, by the faith. We are this, and nothing else. That is where we stand, and nowhere else.

Whoever was at Rimini–and later, at the CL International Responsibles Assembly in La Thuile–saw it and heard it. Alongside the title, which highlights the discovery that Christ's presence makes existence become "an immense certainty" and permits us to live, the sentence that was most often quoted, even by Muslim guests or managers in business suits, was one that our readers know well: "The forces that change history are the ones that change man's heart." This was not our way of paying homage to the genius of Fr. Giussani. It was the description of what was happening there, and of what can keep on happening in the lives of each of us, as we come to grips with the end of summer and the real work that lies within the occupations of each of us: the verification of the faith. We wish you the best in your work.