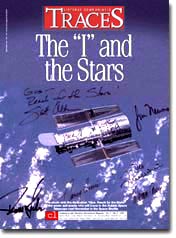 On the walls of our cities and in the media for a number of months, there has been a recurrent factor in many advertising campaigns: an insistence on the “I.” “Because I’m worth it,” say some famous (and affluent) figures as they hold up perfume or other products. An automobile presents itself as different from all the other cars because “it’s like you.” The “I,” therefore, seems to be back in fashion, at least among the ad men. Is this the result of a marketing conviction that products should be as “personalized” as possible? The term “I” probably calls up something important in everyone. Some observe that we have undergone an evolution of individualism: the insistence is on the “I” because by now very few things are felt to be held in common. Each person feels isolated, in the final analysis, and the lords of the advertising world have decided that they must appeal to this aspect of individualism and self-love to sell their wares.
Their reasoning, according to many people, is unexceptionable. However, it is wrong, clearly wrong, and tendentious.
For, if we bluntly asked those around us, “Who are you?” or better, “What is your ‘I’?,” we would probably hear some groping answers on more or less these lines: “I’m a friend of… I’m the son of… the girlfriend of…” or “I go to such-and-such school… I’m from New York… I’m from London.”
In a word, what immediately, even on the surface, begins to define our “I” is the series of ties which distinguish it. The commitment to those ties–beginning with the natural ties to our father and mother–furnishes the first elements clarifying the nature of the “I.” A tie is important to the extent that it seems to me to be a decisive element in my self-definition. This is why we feel so disoriented when we undergo a loss (as with a death or with the ending of a friendship or a love), as though we knew ourselves a little less.
Leopardi’s hymn, To His Lady, focuses on an ideal that has been lost or maybe never existed, and he concludes by calling himself an “unknown lover.” Unknown to himself, above all. “And what am I?” cried his wandering shepherd to the sky.

In our time, the dominant culture and power have systematically favored the image of a man without ties, thus defined by a thirst for self-affirmation, which he tries to realize in the fleeting occasions that he can get something out of, and ultimately becomes the slave of fashion and the prevailing winds of opinion. A detached and floating “I,” at the mercy of brief feelings, blindly starving for something lasting that eludes every object which seems to promise it.
A prominent Italian singer launched his most recent record with a song that ends by repeating three times, “We are alone.” It is a repetition filled with the desperate desire that this not be the last word.
To this common and widespread feeling, which in its most acute and serious peaks becomes an entreaty and a restlessness (Pasolini: “I am an infinite cry”), what does the consciously lived Christian experience propose?

Not a theory on the “I,” nor a refined psychology, but a discovery. The “I” is discovered–just as we discover a new land, a new panorama. In the encounter with the Christian event, we discover that the “I” is continually generated by a Father who entered history and is faithful. And the most evident sign of this generation, which continues through all the days of a man’s life, is the fact of being placed inside a people.
The awareness, the consciousness of our origin, and thus our destiny, is one with the belonging to a people, and this is something that the world’s powers have never been able to accept in Jews and Christians. For the existence of this people limits the opportunities for the prevailing mentality to dominate everyone’s “I,” and demonstrates that the origin and dignity of the person do not reside in what is set by the laws of the state or by the dominant fashions and ideologies.

The discovery of the “I” and what it is made up of disposes us to operate in reality–in our own milieu and in society–so that the “I” of each person may be defended and fostered. And not only as an advertising slogan…