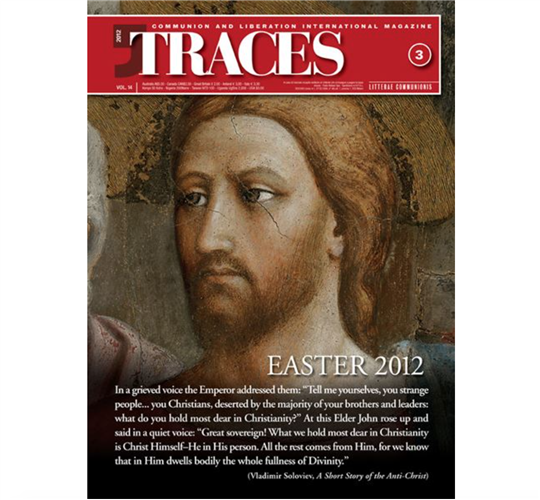 Anyone who has been reading Traces for awhile knows that, as Easter (or Christmas) approaches, the cover is dedicated to what Communion and Liberation calls “the poster,” composed of an image with phrases that the Movement propagates everywhere, to tell everyone in a concise and potent way what is dear to our hearts at this point in history, what the most powerful moments of the year mean to us and to the proposal that we bring to the world. The posters have been a fixture since 1982, exactly 30 years. And every year there is a profound, keen anticipation to know the faces and the words that will keep us company in the coming days, in our daily life of work and relationships with colleagues, and between the four walls of our homes.
Well, this year there is a double surprise, because the quotation on the poster that you saw on the cover has already been used–in 1988, to be exact. And it left such a mark on our history that Father Giussani wanted it on the “permanent poster” of CL, the one that somehow expresses the nature of the Movement itself. So you may have already read it. And that expression, “what we hold most dear,” is so penetrating and effective that it has been used, even recently, in some crucial passages of our life, in encounters, lessons, and documents. Why, then, bring it back now?

Let’s rid ourselves of a possible misinterpretation: this is not a recurrence. True, it has been 30 years since the Pontifical Recognition of the Fraternity of CL. And it is a historic moment also because, on the seventh anniversary of his death–as you will read–the cause of beatification and canonization of Father Giussani was opened. But we are not trying to commemorate or celebrate anything. The point is that this poster describes the present day. It expresses the urgency of today.
It is urgent now, today, when crisis and difficulty further demonstrate how arduous and arid it can be to live as men “after Jesus, without Jesus,” as Péguy wrote. It is urgent today, when Benedict XVI has proclaimed a “year of faith” to remind his people not to start from ethical, social, or civil consequences, taking for granted the origin of faith itself: Christ. Today, the educational proposal of the Movement–the School of Community, which is once more taking up At the Origin of the Christian Claim, the text in which Father Giussani goes to the heart of the event of Christ–is again putting everyone, us and our brother men, in front of Dostoyevsky’s dramatic question, which dominated the cover of the last issue of Traces: Can a man of our day “really believe” in the divinity of Jesus Christ? Our life depends on the answer to that question–an answer that is not theoretical, but dramatic. It is dramatic because what is challenging us is not an abstract formula or a repeated discourse, but a fact: something that Easter places before everyone once more–His Resurrection. Or rather, His Presence here and now.

If we are bringing back the “permanent poster,” it is because it is Christ who is permanent, “center of the cosmos and of history,” as Blessed John Paul II said. With the Resurrection, He conquered history once and for all. He has already made it His, forever. He has already changed the meaning of time and space. And yet, because of the affection that He has for us, because of the tenderness that He has for every instant of every day of every one of us, He is challenging us now. He allows our freedom to recognize Him now, in every instant of every day.
He remains, forever. And, at the same time, He happens now–so that He can become ours; so that we can call Him “dear.”