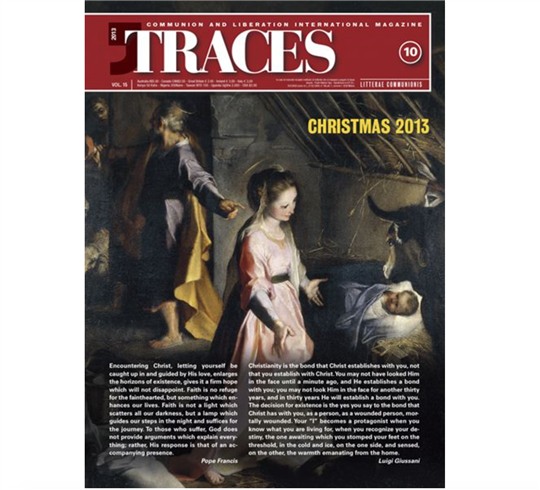 In its way, it will be a party, to be celebrated a month before Christmas. On November 24th, Pope Francis will close the Year of Faith that his predecessor Pope Benedict XVI instituted, and that has accompanied us in these months as we have seen new things happen that we never would have imagined possible, such as the courageous retirement of Pope Ratzinger, a gesture that we must not forget catalyzed all that followed, like the advent of the new Pope, and the surge of gestures and interviews that profoundly influenced the life of the Church: the homilies, the speeches, the encyclical Lumen Fidei, the World Youth Day, the letters, and the interview published in America, to name a few. This whirlwind of events has floored many and overturned many prejudices, forcing believers and non-believers to ask themselves again a radical question that has often been taken for granted: What is faith, truly? What is the nature of Christianity? What does it serve in living?

This question leads directly to Christmas, to the words you saw on the cover of this issue, drawn from the poster that Communion and Liberation customarily uses to greet the decisive moments of the year, and to that “bond that Christ establishes with you, not that you establish with Christ,” as Fr. Giussani wrote. This is Christianity: a Fact, He who gives Himself. It is not an idea, a project to manage, or an objective to reach. It is God who, as the Pope continually reminds us, “primerea,” comes first and takes the initiative. He becomes “an accompanying presence” and, in “letting yourself be caught up in and guided by His love, [He] enlarges the horizons of existence, gives it a firm hope which will not disappoint.” In short, as the Pope says, He “enhances our lives.”

This is the promise of Christianity: enhancing our life, broadening it, giving it breathing room and depth, fullness. It is a decisive promise; what else could we desire? But it is also a simple promise to verify. It is not a matter of interpretations, ideas, or hypotheses. There can only be one test for seeing whether life is enhanced: life itself, experience. We can only know if something truly fills our hearts if we unexpectedly and surprisingly find ourselves full-hearted. We cannot cheat in this, not even with ourselves. When it happens, it is unmistakeable.

So this issue of Traces is a little journey to places where Christmas happens, where life is enhanced–places very different from each other, such as the periphery of an African city or an American hospital. It is a journey amidst normal ordinary lives that offer testimony of this to everyone, because that “bond that Christ establishes with us” is concrete. From that first night of Christmas, it passes through facts, lives, and faces–through witnesses. It is a presence that accompanies us.