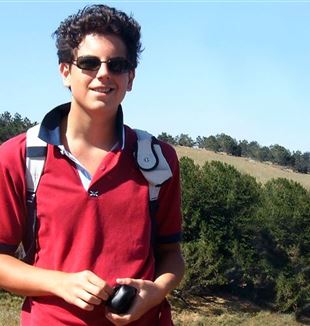 Antonio woke up one night, thirsty. He got some ice water, sipped it, but after a few moments, all the blood went his stomach. Dizzy, he fell, banging his head. He was in hospital for three months, trying to re-learn everything that his brain had forgotten. It was 2008, he was 15 years old, in the middle of full adolescent rebellion, but there in the hospital bed one night he took the Rosary in his hand - who knows if it will help him to start hoping for the future. He fell asleep like that, and began to dream. A boy in a red polo shirt told him not to fear, he would soon recover. He also asked him to continue something that he had started. And to do so he would accompany him from heaven. It would have been nothing more than a curious dream if it were not for the fact that within a day, Antonio recovered all his functions and was discharged. Antonio would only understand who that boy was one month later, when he received a "promotional" package by mail with material about the life of Carlo Acutis.

Flavio lives near Todi. For work, he had to contact a person from Bastia Umbra. He went on Facebook. Many profiles under that name came out in his search, but while looking for his client, a profile photo strikes him: it is of a boy. He has a red polo shirt, and an inscription: "Eucharist, highway to heaven". Strange, the profile is of a 70-year-old man... He looked at the other photos. He discovered that this boy is buried in Assisi. Todi is not far away. He went to the cemetery twice, but he found it closed. Then he too had a dream: it was of Pope Francis visiting that very grave. And the next day the Pope really did visit Assisi. Flavio followed on the television. Towards evening, a sudden thought came to mind: he should try the cemetery again. He arrived at sunset. In the sky, a rainbow brought him directly in front of Carlo’s tomb. At sixty years old, after thirty years distant from faith, Flavio burst into a liberating cry, upon the mortal remains of that boy who went to "seize" him on Facebook.

Carlo Acutis, who will be beatified by the Church on October 10, likes to make himself known in this way, almost always through the internet. It was a great passion of his. He went to buy computer books in the bookstore of the Polytechnic in Milan and it took him three years to create a free online downloadable exhibition, consisting of 160 panels of text and images on Eucharistic miracles. He could not stand that there were people who did not know that Jesus is really alive in the Eucharistic Bread. So many times in history has this Eucharistic Bread transformed into flesh.

His mother Antonia had understood that her son was special since he was little, around the age of 4 or 5, when he always wanted to go into the church to greet Jesus, or when, a little older, he had insisted on making his First Holy Communion to “eat Jesus”. And Carlo had a special relationship with Jesus. Mass, Eucharistic adoration and the Rosary were daily appointments that he never failed to keep. "Mass continued throughout the rest of the day," says his mother: "He felt deeply that God was near, so he tried to act so as not to disgust the Lord. He felt strongly that there is One who is constantly watching us." And that you can meet Him alive, today, in the church below the house more easily than two thousand years ago.

Antonia remembers well both her astonishment and emotion at her son’s funeral, taken within a few days by devastating leukemia, in October 2006, at the age of 15. "The church was crowded with people. But I had never seen so many people before. So many foreigners, poor, homeless people. And yet we lived in the center of Milan." Carlo often stopped to say hello, to chat with the doormen of those luxury buildings, people who were often far from their homeland. "The day after the funeral," recalls his mother Antonia, "they delivered a letter to me. It was a poem by a boy from Sri Lanka, an assistant sacristan in Santa Maria Segreta. I was amazed by the depth, the beauty of the poem, it seemed they were great friends. ‘But did you talk to Carlo?’ I asked him. ‘Never, but he always greeted me with a smile.’ He had struck him so deeply in his heart that in the poem he describes him as "the most beautiful star in the sky." Antonia has collected thousands of such testimonies over the years. "Conversions, physical miracles, there have been many. Right from the start." Not least the one she says she received from Carlo: twins, born to her in her advanced age, and in less than optimal physical conditions.

The Church has examined one in particular - the sudden and inexplicable healing of a very serious deformity in the pancreas of a Brazilian child. Carlo will be elevated to the honors of the altars on October 10 in Assisi, where his tomb is located, in the Sanctuary of the Spoliation, the destination of many pilgrimages.

We have already recounted Carlo Acutis’ short and intense life in an issue of Tracce from February 2014. But today, Carlo is about to be beatified, and it is surprising to see how after his death he continues to work and be present to make the Lord known. "His concern was to make God and the Eucharist loved," says Antonia.

The exhibition about the 146 Eucharistic miracles has travelled around the world several times and can be downloaded free of charge (in the parishes in the United States alone it has been shown more than 10,000 times, and there are over 300 websites dedicated to him in all languages). In Christus vivit, the apostolic exhortation addressed to young people, Pope Francis points to Carlo as an example to follow in his "modernity". "It is true that the digital world can expose you to the risk of closing in on yourself, of isolation or empty pleasure. But do not forget that there are young people who are also creative and sometimes brilliant in these areas. As was the case with the young Venerable Carlo Acutis," who could thus become the "protector of the internet".

"His life is encouraging," says Antonio today, who is responsible for one of the many associations of Friends of Carlo Acutis that gather tens of thousands of volunteers around the world. "Thanks to him, many of us have learned that holiness is not something unattainable, but daily. Love for the Eucharist (through Adoration), love for Our Lady (through the recitation of the Rosary), love for the Church and the Pope (through street evangelization). These were his pillars." Antonio, with many other young people, follows the path traced out by Carlo, and every week they gather for Adoration animated by songs, and open to all.

When the diocesan phase of the beatification process ended, on November 24, 2016, the Archbishop of Milan, Cardinal Angelo Scola said of him: "’Who more than a God, Jesus, who offers himself God, the Father, can intercede for us?’. These were his words. That a young man of that age had such a powerful intuition to explain the heart of our faith, which is the Eucharist... His example will help our youth to let the beautiful energies of life come to light, and to relate to Jesus as the One who allows us to meet, in fullness, the beauty, goodness and truth of God Himself".