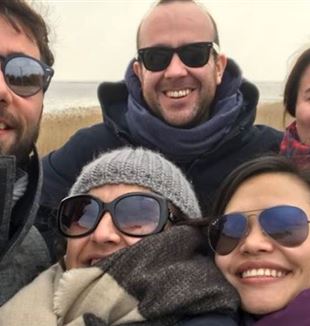 One of the first things I have learned is that mission, above all, is to live your personal relationship with the Lord. This is the most fundamental thing, because you can only communicate what you live, and this becomes even more evident when the people you meet are not believers, do not understand anything about your history, do not know anything about Christianity and, above all, sometimes, you do not even know the language. You cannot demonstrate “anything” according to your image of what it would be like to be a missionary, the only thing you can do is to live with the awareness that He is present and wait for Him. And it is fascinating to wait for Him and to begin to see how He acts. Mission is this for me: to see what He does. Ultimately, this should be the same in a Christian or a non-Christian country, this is what should dominate our conscience. And people realize that you look at them in a different way. They perceive a respect, a dignity that makes them wonder who you are. 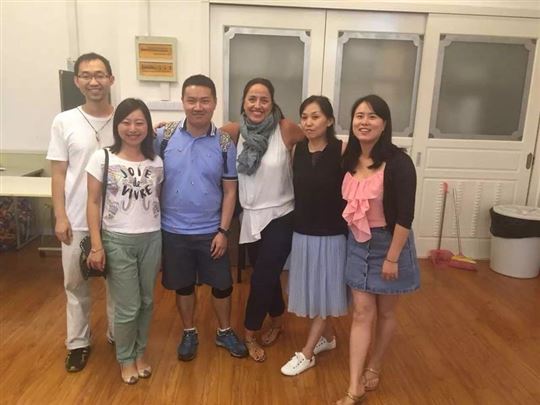 One of the most beautiful things that has happened to us is that, one day, the doormen of the building invited us to dinner. This is totally unusual. They are like a mixture between security guards and doormen, and they speak closed Chinese, that is to say, the relationship with them, these past five years, has consisted of a “good day”, and that’s it. When I go shopping, sometimes I bring them back a pack of biscuits, or some fruit, because they always help me charge the battery of my motorbike, which weighs 20 kilos, or they help me carry my shopping home; whenever friends come over they tell them that since they are friends of ours they can come in without any problem…in short, we have a very good relationship with them. But they know that every day, at 6.45 in the morning, we go to mass and that’s it. So, they tell us that they want to take us to dinner. Surprised, we went. We arrived and they had already ordered…food for 10 and there were only five of us. We began to eat and we spent an hour toasting, again and again, that’s what they do here, they want to honor you and this is their way of expressing it. Right at the beginning of dinner they said, "Well, you’re going to say grace, aren’t you?” And I said, "Yes, we thank God for these friends that He has given us and for sharing this dinner”. Then they asked us why we didn't get married and we explained to them about our vocation as Memores Domini, as best we could. They said that such a thing could not happen in China, because if you don't get married, you don't have dignity. After a while, I told them that maybe we should start packing up because they get up at five, so one of them got up immediately and went to pay. Then they told us: "We wanted to thank you for the way you treated us, nobody has ever treated us like that. People usually treat us with contempt but you have treated us like friends, you have given us gifts, you have introduced us to your friends... do you understand what this is? For us it is everything, you have respected us, you have given us dignity. And that’s because, for Jesus Christ, everyone is equal and we know that you have treated us this way because you are Christians". We all remained silent, but then I said to them: "No one gives you dignity, not even us, because you already have dignity for yourselves. For us, Jesus has made you, and that is enough". They were happy, they told us that they were so happy that they didn't need to drink any more... and we hadn't talked to them about Christianity... never, we only greeted them and, well, I told them that it was Christmas, that baby Jesus is born, that it was Easter, that He resurrects and that's why we were happy, but nothing else. It seems like nothing, but they associated it. It's unbelievable. 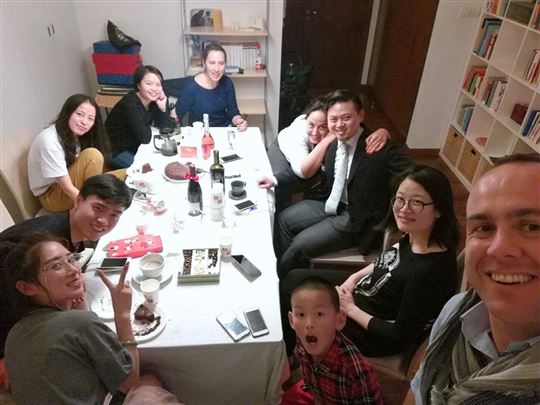 A friend always tells us that it is enough to live from the relationship with the Lord, that it is already everything, it is what gives us peace and certainty, that we might not see all these things that happen, but also if you do see them you are filled with joy, not because we have done anything – which is clear in this case- but because of what the Lord does. This really does give an indescribable gladness, an eternal certainty.

Another incredible episode was when my sister and I were going on vacation to Vietnam and at the airport, at the boarding gate, I sat next to a young Chinese woman. After five minutes she asks me if I go to Mass at St. Peter's, Shanghai's international church. I say yes and she says that she knows me and my sister because, for three years, she had seen us go to the Chinese mass on Saturday at six o'clock in the afternoon and, whenever she saw us, she was happy and had an affection towards us because we were going to mass in Chinese, rather than to the five o’clock mass in English. She thought, "These girls must be fond of the Chinese, to come to a mass in Chinese”. I speak to her and she tells me that she is Catholic and expresses her gratitude for having met the Lord and her desire for all of China to know Him. We exchanged phone numbers and on our return we invited her for dinner at our house. We began to speak and she expressed, although not clearly, that she lacked a community, a place where she could live her faith. We invited her to a school of community and she is now one of the people who hold it. Equally, you realize that it is He who gives each person what they need and it happens whatever the environment or circumstance.

We met many people in these years, and we have, more or less, told them about our vocation and about the movement of Communion and Liberation. Honestly, I don't think that even 10% understood anything, but what they do know is that we are people who are happy, who have a clean and tidy house (a great sign of Christianity for them), who like to be together and share life. These people know that we are there, that we are always there for them, whatever happens, that they can always come and share their life with us, that we don't expect or ask them for anything but that we are only happy because they exist. This has always been very clear to us, from advice given to us by a friend: "You are not there to create any structure of the movement, but to live your relationship with Christ, and the people will know that you are there, without asking anything of them".

It is fundamental to be well accompanied, to follow someone concrete. It is very common and frequent, at least it has often happened to me, to measure myself, to calculate and to see that the years go by and "you don't bear fruit", as you imagined. It is fundamental to be constantly helped to remember that your measure is not His measure and that Jesus could perform a miracle and convert everyone but what He is looking for is the conversion of your heart. The message that Fr. Giussani sent to the first members of the movement who went to Brazil on mission, has been especially useful to me. It said that what is important is what you are, not what you do. That was a real liberation, something to come back to every day.