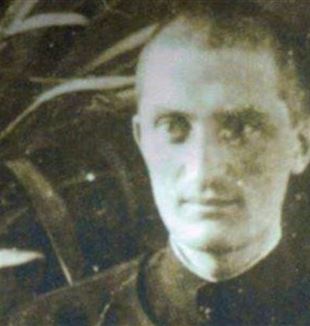 In January 1995, Giussani learned from a friend in the Memores Domini, Cristina Bologna, that a medically unexplainable healing was being attributed to Saint Riccardo Pampuri (1897-1930), a medical doctor and brother in the Hospitaller Order of Saint John of God, who had died at a very young age and been canonized by Pope John Paul II in 1989. Giussani reported the facts as they had been told: “A relative of one of our friends in Coazzano developed an extremely serious problem with her spinal cord: she needed a transplant or auto-transplant, one of the worst-case scenarios. So Laura said to a friend of hers, “Let’s do a pilgrimage close by, to Saint Riccardo.” Notice that she chose Saint Riccardo because he was the closest, and there is nothing scandalous about that; if she had been closer to Our Lady of Caravaggio, she would have gone there. So they go, and they buy an image of the saint, and Laura says to Cristina, “We need to be concrete, so touch Saint Riccardo’s clothes with your image.” So Cristina touches the hat from his band uniform with her image. Then they go together to the hospital and give it to the woman. While she’s sitting there reading prayers, in walks the doctor with the results of the latest tests. “I must have made some mistake”, he says, a bit flustered, “we need to redo the test.” Half an hour later, the same results came in! The doctor said to them, “Listen, you have every right to talk about a miracle here. You can go home.” “What?” “Go home, you’re cured”. Commenting on the story, Giussani exclaimed that this had happened “not two thousand years ago, to the widow of Nain, but today.” So, he added, “all of this serves to disguise the unfolding of the most ‘cunning’ trick God plays on humankind”. 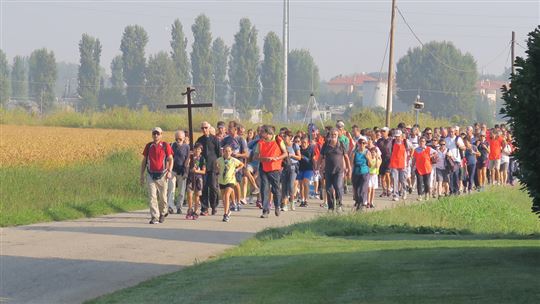 Giussani had Cristina Bologna’s letter published in the February 1995 issue of Tracce, along with an article describing the life of the saint. Suddenly, Fr. Angelo Beretta, pastor of the church in Trivolzio, began receiving phone calls from all over the place, from people wanting to know the mass schedule and whether or not it was possible to pray before the reliquary of the saint. Thanks to Giussani, “people come from all over Italy and the world to honour Saint Riccardo”, says Fr. Angelo. He remembers their first meeting in 1995: “Someone had called to tell me that a ‘priest’ was coming at eleven to celebrate mass in honour of Saint Riccardo. I went out into the square, and I saw Msgr. Giussani pull up […] After exchanging just a few words, I felt that he had known me forever. He celebrated Holy Mass, and then came over to the oratory for a coffee.” The two priests spoke at length, “and then he asked me why didn’t I buy the big farmhouse that had just become empty across the square from the church, and use it to build a guesthouse. I was stunned, but he encouraged me.” Fr. Angelo recollects: “He came back again after that, almost every year, to celebrate Mass, and even a wedding one time […].”

Giussani would often speak of Saint Riccardo, stressing the saint’s nearness to his life: “In time, God produced His presence, the sign of His presence, through the miracle of holiness. The miracle must come from something nearby, that is, within our horizons. The place where Saint Riccardo Pampuri is visible from Gudo: from Gudo, from the top floor [of my house], you can see Trivolzio”.

On another occasion, he again emphasized the nearness and ordinariness of Pampuri’s life: “In the history of great Christian friendship, Saint Riccardo emerges as an older brother, who demonstrated to our underdeveloped lives- immature and yet desirous of holiness- the root of what counts, that is, the belonging to Christ, and the way opened up by it: following Him. His story is not a sensational one as far as works are concerned, and yet the extraordinary outpouring of people at his funerals shows just how much he had worked among his people, and with what love.”

Giussani was struck by the fact that Saint Riccardo “didn’t become great because he threw himself into a bold confrontation with reality, inevitably destined for disappointment because of the original sin of our ancestors.” On the contrary, “it was because of a radiant witness of what Saint Paul says of himself: ‘Insofar as I now live in the flesh, I live by faith in the Son of God’ (Galatians 2:20). And the whole human story of Saint Riccardo, it was as brief as it will be everlasting to mark the destiny for which we are made: to recognise He who is among us, the good face of the Mystery that makes all things, present here and now.”
On December 1995, during the spiritual exercises for CL university students, Giussani returned to the topic of Saint Riccardo, reading aloud a letter he had received from a student. She had spent more than a year undergoing chemotherapy in an attempt to treat her cancer, but the situation had grown progressively worse. Taking up Giussani’s invitation, the young woman had gone to Trivolzio many times to ask the sainted doctor’s intercession.

"On November 2, the day of the Dead, I was called to the hospital; after a long waiting list, a spot had opened up for a spinal cord transplant. The nurses had me put on a gown and took me to have my hair cut: it seemed that everything was ready. A thousand thoughts passed through my mind, but only one took shape: I prayed to the Lord to let me share in His Passion, and that nothing of me should be lost. I asked to give my life for you, Fr. Giussani, and for my friends. And in that instant I was surprised by a sense of calm, a surprising peace. I was afraid of the pain, of death, which you can feel even without seeing a hospital ward, between the sterile rooms. […] I wanted to live my obliteration not as a desperate affliction, but as a sacrifice. I was entirely in the hands of others; anything could have happened to me. But I was already safe, since I was in relationship with the Eternal. Thinking back on it now I wish I could relive my entire life like that moment. I saw my hands, my poor hands that would be covered with needles and tubes. I saw my father’s face, suffering but sweet.

That morning and afternoon were full of tests of every kind, repeated again and again. Finally, that evening, the completely unforeseeable result arrived: there was no need for either dialysis or a transplant: the spinal cord had surprisingly begun to produce on its own. It was as though my body, mute and immobile for over a year, had suddenly begun to work again like before. ‘These things happen’, the doctors said. ‘The treatments have finally worked.’ It's not enough for me! An answer like that cannot be enough for me. I looked at them, stunned and incredulous. […] He loves me. I still don't understand what can have happened, or rather I know, but I tremble even to think of it. And I am flooded with gratitude".

Having finished reading, Giussani commented, “These people, in the history of humankind and in our personal history, are made objects of a particular initiative, which people cannot explain. A voice tells us this, their own voice: […] ‘He loves me’. […] the greatest miracle is that we are loved. This is what our friend felt […]. You are loved. This is the message that arrives in your life, whether you want it or not.”