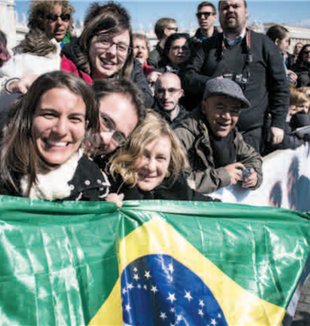 Jianqing Zhang
Padua (Italy)
Being at the gathering with the Pope was a true grace for me. I have been in prison for ten years, and have never slept a night outside. Just leaving [prison] gave me an immense joy, but finding the Pope in front of me and being able to tell him that in a month I would be baptized (receiving the name Augustine) was almost too much. I keep thinking of that gaze, of that smile he gave me, full of mercy and love. I had the sensation of being purified of my sins. A new life is being born again: the Lord is always with our companionship and He never abandons us. I’ve begun to pray more, above all for the people who still suffer today because of me.Itis a need thatsprings from the depths of my heart, something that has miraculously opened through Pope Francis’s handshake. This experience is calling me to do something for the Lord, that is, to transmit His love to my neighbor and to announce that the mercy of God is for everyone. Now I am living this mission intensely. Finally, in my smallway,I can be useful to the Lord.

John Kinder
Perth (Australia)
Since he has returned to Perth, John has done nothing other than talk about the experience. Even his colleagues at the very secular University of Western Australia stop him in the hallways of the Languages Department to ask him about meeting the Pope face to face. “After the audience, I got in line to greet him. I was trying to put my thoughts and words in order too, but then his gaze arrived. Those ten seconds were the simplest thing in my life: letting myself look and desiring just to follow a man who is following Christ.”

In Saint Peter’s Square he was with his New Zealand friend, Fr. John O’Connor, but he also wanted at all costs to meet up with his friends from way back when, those he had met in 1977 as a young student in Milan. “Deep down, my story has been one of a gaze that in every circumstance has brought me closer to Christ. For this reason, I am not afraid of ‘de-centering’ myself, because it coincides with the certainty that at the center of life, He ispresent.” This is the same point from which the communities of Melbourne and Sydney have started again: “We are very small realities,” recounts John, “but we, too, are tempted to publicize the Movement. Instead, the Pope freed us from the desire to ‘make an impression’ and made us see that the one thing that counts is to live the encounter that makes us feel loved.” This is the freshness with which the friends of Sydney are now preparing the exhibit on Giussani. “I felt that the Pope treated me like an adult, and for the first time I was not afraid to return to the usual things. Christ primerea with me, He comes first. So He is already there at home, waiting for me.”

Anja Strotseva
Minsk (Belarus)
Anja belongs to the Orthodox Church of the Patriarchate of Moscow. She received the invitation to go to the audience with the Pope around Christmas time, during a pilgrimage to the Holy Land. “It was a somewhat strange proposal for us Orthodox. I didn’t think I would be able to organize it, but then, in February, I read Pope Francis’s appeal for the war in Ukraine, and I decided.” Before then, she had never heard what was happening in eastern Ukraine referred to as a fratricidal war among Christians. “Then I understood that I wanted to go to him, because the Pope prays for and feels the drama of this war the way I do.”

For her, the war in Ukraine is not just a political question, but is the manifestation of a deeper malaise that affects society and the Church. “One of the reasons we came was that we wonder what voice Christians can have in the world today, how it is possible to witness to Christianity.” The thing that most struck Anja and the group of Orthodox sitting on the parvis was the lack of formality in the way the audience was run. “I saw a great freedom that left space for the personal encounter. It is something we are absolutely unused to in similar circumstances. For this reason, the question I have is how you Catholics have managed to free yourselves from formalism.”

Yuan Pei
Berkeley (USA)
She is the one who sang the Ave Maria in Saint Peter’s Square. She met the Movement in an engineering firm in Shanghai, but now she is a full-time mother in Berkeley, California. Unaccustomed to singing in public, she felt immense emotion at performing in front of over 80,000 people. And yet, if you ask her what is echoing in her mind about that day, she goes straight to the Pope’s words. “My heart leapt when he said that the privileged place of the encounter with Christ was his sin. I have always been ashamed of my weaknesses. Instead, the Pope’s humble and honest expression freed me to accept who I am and what I am called to do. This is the true freedom that Christ promised us. So I pray for a wounded heart, a beggar’s heart, so I will always desire His gaze.”

Adele, translating for Yuan Pei, says, “Words that would not have made sense to me became familiar. This is how I came to truly understand Christianity. I come from a Protestant background and attended Bible studies in which we analyzed the Gospel line by line. I always left having understood everything, but with nothing that remained for me. Instead,the first time I read Giussani, I understood little to nothing. The one thing I sensed was that he recognized a desire that I was afraid to even evoke.” So she continued spending time with those friends. “They were so different from anyone else. I felt so at home with them! I stayed close to them, and, as in Saint Peter’s Square, words that were foreign tome became full of meaning. Recognizing the presence of Christ in real life was transmitted to me by people who considered me their friend. As the Pope told us, ‘the encounter is not with an idea, but with the person of Christ.’ This is exactly what happened to me and continues to happen to me.”

Bright Lumanyika
Kampala (Uganda)
This was the first time that 25- year-old Bright had been to see the Pope. “I listened while someone next to me tried to translate what he was saying, and what Carrón said.” Just a few sentences, he says, smiling. “In other words, the essential to which both continue to call us.” He works at the Meeting Point International, and met the Movement “a few years ago, in my school.” He is one of Rose’s kids, those who grew up around the group of women with AIDS who have been reborn in the friendship with the Kampala nurse. “It was the encounter with a father. Without a father, a son cannot exist. I don’t know a lot about the Pope. I have read about him, often on the Internet, and then I heard Carrón speak about him, when he said that we have in front of us a father who regenerates us every day. This is why I felt ‘at home’ in Rome.”

He is returning to Uganda with a great desire to start again from what he saw happen in Saint Peter’s Square. “Hearing those words reminded me of something of Fr. Giussani’s that I read, in which he spoke about the responsibility of the charism,” a responsibility to the world, just like Francis’s invitation to “go out.” “Looking at the essential, at Christ, because this is the one way for me, for everyone, to live and be happy.”

Timothy Forse
Cambridge (Great Britain)
Timothy Forse is an Englishman through and through, proudly Anglican, with all the questions, doubts, and pain of a member of the High Church raised in the school of Michael Ramsey, the unforgottenArchbishop of Canterbury in the sixties and seventies. Timothy was invited to the audience by Carlo,whom he had gotten to know a few years before when Carlo and some friends lived in Tim’s home in the center of Cambridge for a period of study. “One of them got up early every morning to go to Mass. He took his faith very seriously and had no problem talking about it with me.” What struck him, in particular? “It’s hard to explain, but to use Newman’s words, ‘Cor ad cor loquitur,’ heart speaks to heart. Over time, Carlo gave me some books of Giussani’s and introduced me to some other friends in the Movement. They entered the front door of my home and came into my life to stay. Carlo, Giussani, and Christ.”

The invitation came a few days before the audience. “My decision to come is part of a Yes with a capital Y, born of our deep friendship. Just one word describes what I saw: extraordinary.” His initial reaction was the perception of Francis’s humility. He felt a sense of grace, felt that he had received a moving answer to his “incapacity to set aside my ‘I,’ what the Pope called self-referentiality.” At the same time he felt conscious of his own shortcomings, the place where Francis said the Church can pour the balsam of God’s mercy.

Once back home, unable to express in normal words what is now moving in his heart, he took up paper and pen and wrote a poetic reflection dedicated to his friends of CL. Entitled Lenten Rose, it is the first flower to blossom in his Cambridge garden.

“You are there / The metaphor tells / The sign of appearing / First you, Our Lord.”