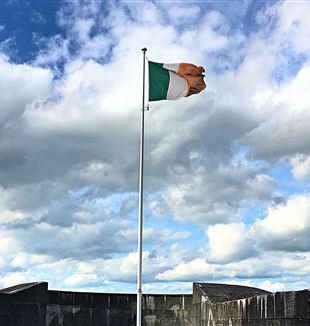 This happened once before in my lifetime, with the Irish economy in the early 1990s. There had been a recession right through the 1980s, and nobody had expressed any hope that it might lift. But then everything did change. In 1997, The Economist magazine ran a cover story about Ireland under the headline: “Europe’s Shining Light.” The dream lasted for a decade and then evaporated as rapidly as it had materialized. Now, it seems–in listening to the experts–we may be again at a moment similar to that of the early 1990s. In mid-December, we exited from our three-year “bailout” program. Positive growth projections are being made for the first time since the 2008 collapse.

It is as if we have learned nothing and understood nothing. The sequence I have outlined is–I hope this is clear–the chronology of an illusion. There was no recovery. There was only the semblance of one, generated as though by a conjuring trick. We began to believe in something that never existed in the first place. Our history of colonization is the key to understanding Ireland: we never got around to marshaling effectively our own resources. Having escaped from one dependency, we sought out another. Really, what we have arrived at is a “permanent interim” solution to economic survival: offering a location, a workforce, and an attractive tax regime so that others will come and do for us what we never got around to doing for ourselves. We are neither mammals nor fish, but something like turtles who live neither on the land nor in the sea, but at the boundary between the two. There, on the shoreline, we live off the splash that comes in from the waves.

“It is as if we have learned nothing and understood nothing.”

There is always the possibility, during the periods when the splash is not so bountiful, that we may look around us to see what else we might do with ourselves. Now that the splash appears to be functioning once more to our advantage, we are happy to continue on, until the next crisis.

The years of austerity have cost our people much. The machinations of a desperate State, clamoring for the means of its own survival, have done untold damage to the fabric of human feeling in our country.
Relentless policies of austerity directed at the blameless and least capable of bearing the pain have done much to undermine the sense that words like “justice” and “morality” have anything in them that we can rely on into the future. Much damage has been done to the collective sense of what is fair and right, compared to what is necessary and just in the treatment of the ordinary citizen.

We are beggars, not choosers. We remain dependent, as before, on the willingness of multinational corporations to come to our country and give us the benefit of their splash. But we look upwards in hope, because that is what our history has taught us to do. And of course, we will not pause to consider the nature of that hoping. The amnesia which will soon settle once more upon us will ensure that we will give minimum thought to our repetitive experience of pursuing economic salvation. We have been poor twice and rich once and still cannot say that we have achieved the correspondence of our desiring. Yet, we will try at least once more. The ultimate illusion of economics is that it promises the satisfaction of human desiring but cannot deliver. We have had several years to consider this proposition in various extremes of experience, and yet there is no evidence that we have come nearer to comprehending the nature of ourselves or of reality.