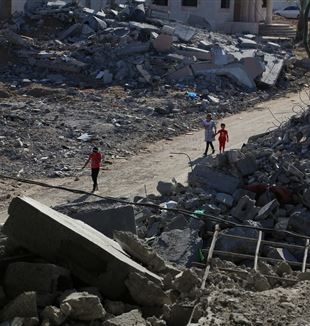 “Hi Gabriella, I hope you’re ok…” George’s letter to his friend starts with concern for her, a resident of peaceful Italy. George Antone has been confined to the Gaza Strip since his birth. He is a Christian, one of 2,000 among 1,500,000 Muslims. He starts these brief lines while bombs from an Israeli raid fall on his neighbor’s house. “Gaza is at war, but we know, in the depths of our hearts, that the Lord does not leave us alone.” Telephone lines come and go, and George entrusts many of his concerns, along with his fears and hopes, to social networks and the e-mails that he sends to his friends. “Now, our vocation is to carry a piece of the cross of Christ, and to show it to the others. It is the duty of every Christian, to bear that glorious wood in what he lives.”

He bears it even when life is made up of fear and pain, which George lived often in those days of war that made front-page news all over the world. Then came a treaty that is so fragile that it certainly doesn’t eliminate the fear. Hamas’s rockets, the Israeli offensive, the Holy Land on the verge of war once more... And they, the Christians, must come to terms yet again with the reasons for and the root of their presence, which is so tenuous that it seems almost nonexistent amid the bombs and in comparison to the power of the “others.”But it is so important–decisive, even–there, where everything began.

“Go to meet Him.” It is almost Christmas. George is approaching it without electricity and with the windows open, so that the noise of the missiles does not shatter the glass. He has spent many sleepless nights close to his daughter, Laila. “Every time the missiles thunder, we tell her that someone is knocking on the door.” But she never opens it, for fear of who–or what–might enter. George worries that his daughter might suffer traumas that could follow her for her entire life. “Pray for the children,” he writes on Facebook during the sleepless nights, “they are not to blame for what is happening between these false ideologies.” And then he adds, “To those of you who are suffering, do what He said: go to meet Him. Not by car, or on foot, or by plane, or on a missile. Use the Rosary.”

In the local Christian community, many people pray it every day, each in his own house, hunkered down in fear, during that week of hell. After the treaty, George wrote three simple words in his diary: “God is working.” He has never doubted it. You can see it clearly in his eyes, in the pictures taken in those days and posted on Facebook. Yes, Gabriella, George is fine. Actually, you could even say that he is a happy man.

“Why does God allow these things to happen in Gaza?” Johnny’s outburst temporarily silences Sister Nabila, his old friend, who had asked him how he was doing during the first days of the war. “If you want, you can ask Him,” she replies, giving him a small Rosary to pray. He doesn’t react. These days have been difficult for Johnny and his family. They cannot go out during the day; they cannot sleep at night. Their house has become a smaller prison, within the larger prison of the Strip. “We didn’t understand anything that was happening,” he says. “We heard very loud explosions, and we didn’t know if they were the Palestinian missiles or the Israeli raids.” Exhausted, he tried to call a friend Sunday night, around 11:00, when bombs began to drop on Gaza once again. And again the same question: “Why?” “I don’t know,” answered Mujib. “But we are Christians, and we have to forgive. I am praying for them.” His friend then told him about Abu Boulos Salem, an Orthodox Christian who recently died. He had heart problems, and after the umpteenth raid, “when you have those moments in which you aren’t sure that you’ll make it to tomorrow,” his heart gave out.

Salem’s funeral. The following day, Mujib decided to go to the funeral. Everyone was there to say good-bye to Salem: his wife and five children, his friends, and complete strangers. Hundreds of parishioners left their homes for a few hours. It was crazy, to take a risk like that while the missiles were still flying. “Families sometimes don’t have anything to eat because it’s not safe to go out into the streets,” explains the pastor, Father Jorge. “And, instead, more than 200 people chose to come here, to pray for him.” But it’s not just a matter of numbers. “I was struck; I saw these people happy, smiling. They told me about their days spent at home, praying the Rosary with their families. And they were happy as they told me these things.” Johnny was at Salem’s funeral, too. And, who knows, after seeing that crowd, so numerous and happy, perhaps he too found an answer to the question that tormented him. 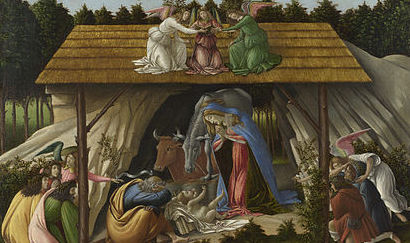 Hanna and Diana have been married for 10 years. They have lived in Gaza since they were born, around 35 years ago. Claire, their only daughter, is eight years old. During the last war, in 2009, Hanna’s minibus was destroyed and he lost his job (which required him to drive all over the Strip to make deliveries to clients). “And, several months later, I was diagnosed with cancer,” says Diana. “When this war started, I feared the worst. We still had ‘Operation Cast Lead’ in front of our eyes.” Claire often stayed with her grandparents during that period, because her parents weren’t home. She has been traumatized ever since. “She often wet her bed, and when she heard a sound or a shot, she immediately started to tremble.” Because of this, “when we heard the first explosions, we immediately rushed home.” An anxious Claire was waiting for them. Diana ran to her, and held her tightly. “Those minutes crawled by,” she recalls. “We stayed there, in the bedroom and under the covers. Claire asked me to pray a Hail Mary with her.” When the drones stopped flying over Gaza, Claire said to Diana, “You know, Mom, this was the most beautiful danger of my whole life.” She was probably just as afraid as she had been four years ago. But this time, her mother was with her–that presence which sustains you in life. And this changed everything.

A problem postponed. A few hours before the treaty was signed, the last raids destroyed multiple buildings. Not even the media building was spared. Several civilian houses also burned to the ground. The Sruir family was returning home from the Latin parish. During Eucharistic adoration with Fr. Jorge, they had asked for the gift of peace. Arriving home, they found only rubble. All of their belongings had disappeared under the debris. They ran to the pastor, to ask him for cots in the parish. Even now, there are people who take refuge there at night. “When I saw them return, I didn’t know what to say,” Fr. Jorge tells us. He sensed that something had happened, and he was searching for adequate words to respond to all of the questions about meaning that they would ask. But Mr. Sruir beat him to it: “Praised be the name of the Lord, for He is good.”

Now all of Gaza sighs in relief. The treaty announced in Cairo imposed a cease-fire on both sides, even if the agreement has already demonstrated its precariousness. The people know, from experience, that a treaty of this kind postpones the problem for six or seven months, a year at most. Everyone wants a serene and lasting peace, including the 2,000 Christians in the Strip. They, too, are waiting. And they know that soon it will be Christmas.