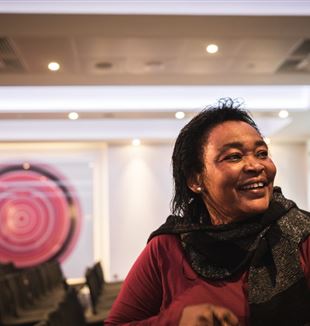 "Dear friends, you are very welcome! The first reason for being together is to walk in the direction Carrón is leading us, to look where he is looking, and to let ourselves be immersed in the contemporaneousness of Christ." With these words, Rose welcomed her guests, who had come to Kampala from all over Africa and from Italy for a three-day mini-vacation in late November. More than a welcome, it was a promise, because these days were truly the opportunity to rediscover what sustains us, a coexistence that was the sign of His contemporaneousness in everything, from the talks to the singing together, meals, and walks. Thousands of miles from home, each of us can say we felt loved for what we are.

The first afternoon, we went to Kireka to meet the women of the Meeting Point directed by Rose. They were stupendous, as always, for those who have known them for years as well as for those who had met them for the first time. You immediately feel embraced when you see their glad faces. Their witnesses are dramatic: looking at them, you would never know they are sick with AIDS, or are former rebels, rejected by their own families, by parents and siblings. But in the simplicity of their stories, it is clear that a gaze opened their hearts. Agnes speaks with emotion of her life among the rebels, the atrocities she was forced to commit, and how, upon returning to her village, she was cast out and disowned as a daughter and a sister. "I spent the days closed up at home so as to avoid meeting anyone. In the meantime, the disease was consuming me." Then she met Rose and "those women." "They made me feel loved again, worthy of an esteem that all my evil could not reduce."

More than the Tribe
Listening to these women, it is evident that their gaze is always fixed on the moments that restored their lives. But as Agnes speaks, I think of my own evil, my betrayal, and my smallness, and of this same gaze that saved me, too. When asked how she manages to communicate all this to her women, Rose answers with extreme simplicity, "I try to look at them the way I was looked at by Fr. Giussani. I saw myself as limited, a nothing, but he saw in me something great. This is how I understood the Movement: if this is CL, then count me in. 'Work' for me is the expression of this gaze, which reveals who God truly is." This awareness of being embraced with all our nothingness gives life to a belonging more powerful than any tribal bond or cultural tradition.

That evening in the hotel, we had the first assembly. It is impressive how spending a couple of hours with Rose's friends reawakened our entreaty and heightened our gratitude for what has happened to us. There were a great many contributions, because everyone wanted to tell and retell what was closest to their hearts, all the expectant awaiting and all the entreaty with which we had arrived. It is precisely a question of faith: acknowledging the gaze upon us that drew us from nothingness is acknowledging the Presence that loves us and makes us now. Vivian from Kenya related how her relationship with Rose in the past year has helped her rediscover in every moment the beauty of her vocation to marriage. The various difficulties do not block this gaze, and she is certain that this vocation is for her own good: "Rose is a sign that points me to Christ," she said. "He accompanies me within everything. Through her, I feel the closeness of Carrón: he is thousands of miles away, but is present for me the way a father is present for a child. In my heart, there is a small Kireka and I, too, feel I can sing that Rose has set me free, because it is so–she accompanies me to Him." Peter from Cameroon described his experience of illness and abandonment and the discovery of friends who showed a care and attention for him that he himself did not have. "For me, it was the opportunity for meeting Him, He who truly makes life great," he said.

The next morning, we all went to the shore of Lake Victoria, the source of the Nile. Through the branches of the centuries-old trees of the Entebbe botanical garden, one can see the intense blue of the sky. Immersed in this lush and splendid nature, we had Mass. Then, we enjoyed a special treat: in the midst of the falling leaves moved by the wind, about 15 young people sang traditional songs from the Italian Alpine Corps. Their skin was black, but their pronunciation of the Trentino dialect was impeccable. How moving it was to see that the simplicity of the songs of the Alpine Corps reflects the simplicity and the beauty of these young people. I am reminded of the words with which Davide Biasoni introduced the second day: "Belonging is the common thread that makes it possible to be men and women, in Africa just as in Russia, because the event of Christ, totally human, changes my relationship with reality and introduces a new way of being." It is truly so. We are united; we are One. The harmony with which we lunched on the lakeshore, or with which we played soccer was simple and, at the same time, extraordinary. It is evident to everyone that an Other is making us.

But the day was not over yet. Henos from Ethiopia spoke of how his life changed after the encounter with the Movement in his country, and how, after the Meeting and the CLU Equipe, he felt the need to propose School of Community to his friends, who are now following him. "The biggest surprise was my sister, who has a rather confrontational character. After participating in a gathering, she thanked me and said, 'Finally, I've found what I've been looking for.'"

I'm Interested in You
Fr. Stefano, a physician and Capuchin who has been on mission in Madagascar for 30 years, has built a splendid work. He is a genius in his profession, but he was literally dying within. All his seminary formation had focused on denying oneself for the glory of God. Thus, he was shocked last year when, through work, he met Franco, an Italian in the CL Movement. As always, Fr. Stefano spoke about his work and what most worried him: "What will happen to the hospital, if I should go?" Franco's answer surprised him: "If I help you, it's only because I'm interested in you, not the hospital." "What, someone is interested in my person?" Fr. Stefano was invited to the Fraternity Spiritual Exercises and the Meeting in Rimini in August. "I heard the exact opposite of what my superiors had always told me in the seminary," he explained. "Go deep down into your humanity and you will go deeper into your spiritual life." This was the beginning of his rebirth.
The next to speak was Fredy, one of Rose's kids. "I was an orphan, but now I'm not anymore. I lost my parents, who were killed by the rebels in 1993. Then I moved to Kampala, where my life became even worse. I often didn't have enough to eat, and I lived hand to mouth." Then he heard about Rose, and decided to go meet her. He expected to see a director sitting in an office, but instead he found her among the women, dancing. This was the beginning of a friendship with her, School of Community, and the encounter with Carrón. "His gaze changed me. He made me want to ask to be like him, and I began to follow him through the people who were entrusted to me. My culture was redeemed: from that moment, I began to follow, and my life has begun anew. I haven't lost anything; instead, I've received everything. I haven't lost my parents, because I realize that Christ is everything for me. I have Him, I have my parents again, I have everything. The only thing He needs is my 'yes' in every moment. Now I live with four other friends. We accompany each other in going to the heart of what we've encountered and, through them, I am guided to Him. I want to stay with Him always."

Finally, Deogracious: when he was 12, he lost his father, and his relatives denied his mother her husband's property. She did everything to enable her six children to study, but soon the oldest ones were forced to remain home. In 2005, he met Rose and, two years later, Carrón. "In that period in School of Community we were talking about solitude, but I had found what I wanted: I was able to study and I had friends. However, Carrón challenged me, asking 'Are you satisfied in this moment? Don't you desire anything else?' Understanding that he was right was an injection of new life. So, following someone who knew me more than I knew myself was a great discovery. I realized that following School of Community meant following my life, the realization of my own 'I.' And from that moment, everything became interesting. Even singing had a meaning; we sang for an Other. I had a face to follow."

Every moment was a witness; every lunch or dinner was an opportunity to listen to the story of what the Mystery is doing among us in the most remote places in Africa. On the last morning, the assembly of over two hours was too short, because everyone wanted to talk; we were all moved by the embrace we felt and experienced during those days. Rose reminded us of the common thread of the vacation: only in belonging do we feel free. "In belonging, I began to discover tenderness for my life and thus, as a consequence, tenderness for the lives of the others. You can't give what you don't have. A person who belongs, who discovers that she is loved, becomes a protagonist because she receives the consciousness that unites all of reality. You become lord of reality not because you possess it, but because you are possessed by the One who makes this reality. Life is this discovery of a paternity in action. Reality belongs to my Father: for this reason, I do not fear."

Life Companion
Davide concluded the assembly: "We needn't be amazed by our betrayal or our incapacity. The only thing necessary is that we don't resist the Grace, the event, when it happens. Christ has made Himself my companion–not in my thoughts, but in the concreteness of life, in a companionship that transmits itself through a different gaze. You have described it well, and not only described it: you have been witnesses to it. Through your 'yes,' this has become possible for me. I was born in the Movement, baptized by Fr. Giussani, and grew up in the Movement, but without this contemporaneousness, all of it is nothing. May we be able to use all that we have available, our companionship, the School of Community, so that we can be ready to say 'yes' to the Mystery, rediscovering that we are truly in need of everything."