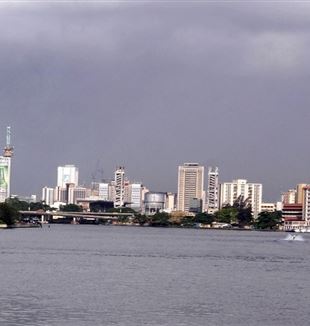 A group of thirty or so young men with a hand-painted banner that reads, “Meeting CL 2009,” among the mud-built, grass-roofed houses. If you see what Fr. Giuseppe saw as he went to northern Nigeria, you will “hope against hope.” Jalingo, Taraba State, is two days’ journey from Lagos, the former capital. In the past, Fr. Giuseppe Panzeri has traveled often over these impossible muddy roads, to the amazement even of the Nigerians. He is a Capuchin priest from Lecco, Italy, who has spent 15 years in Cameroon, and is the CL Movement’s “visitor” for Nigeria. Rita Sala, whom he took with him this time, has been in the Memores Domini house in Lagos for three years. Fr. Giuseppe has not been to Jalingo since 2006. The roads are in a sorry state thanks to the weather; there is no electricity, the water supply is problematic, and termites eat the houses. Despite all this, life in Jalingo has been brightened up by the presence of the untiring Sr. Caterina, who has been there for 24 years. A missionary of the Congregation of the Sisters of the Child Jesus, Sr. Caterina has become the heart of this place. She has been away since February, when she left for Bergamo, Italy, her hometown. She will return to Jalingo in September.

With her absence, Fr. Giuseppe and Rita wondered whom they would find in the village, and “what will the people be doing without Caterina?” They were imagining all sorts of things–everything except for what they eventually found. There were 30 young people waiting for them, whom they didn’t know. There was an altar prepared, surrounded by a circle of chairs. At the end of the Mass, they all stood up and sang, “È bella la strada” [“It is a Beautiful Road”] word-for-word in Italian. Then they began “Nitida Stella” [“Bright Star”]. “We couldn’t believe our eyes,” Rita said. Fr. Giuseppe spoke to the youngsters about hope. What is happening there is not the result of human planning. “What you are living is God’s work,” he told them. He blessed that life in the humid heat and in the frailty of it that changes everything. “You have the grace of not being able to deceive yourselves; this is not the outcome of an organization. It is God who wants this, and carries it forward.” Meanwhile, Rita couldn’t help herself, she had to ask what happened after Sr. Caterina left. They laughed: “When she was here, she would do everything for us; she followed up on us, one by one. When she left, we realized that if we didn’t do it, no one else would.”


From Bergamo to the brutuku. During these past months, along with Sr. Grace, a Nigerian sister, the community has been running the kindergarten founded by Sr. Caterina. It was there that the children from Kona, a village 3 miles away from Jalingo, saw a cement floor for the first time. This kindergarten had 77 children enrolled even before it opened, and it now has 192. With help from Distance Support and AVSI, it has grown into something amazing. As a matter of fact, the idea of a kindergarten had never entered Sr. Caterina’s head. It was the people who asked her, “Sister why don’t we open a kindergarten?” And she said yes. After all, it’s what she has been doing for 20 years, since she arrived in Nigeria. At the age of 25, Caterina Dolci left Bergamo for Lamezia Terme, in southern Italy, for her religious formation. After taking her final vows, she heard the words of her superior, “We have to go where there is a risk that the Incarnation may not happen.” This drove her from Calabria to Africa. In 1985, she left for Jalingo, where she soon understood that “Nigeria is a mystery.” Twenty years have passed, and she still believes it: “Nigeria is truly a mystery.”

Her convent is in Kona, and she travels back and forth to Jalingo so as to be with the people, and because in Jalingo are “her” young adults, Bitrus, Innocent and the others. “They speak about Fr. Giussani as if they had met him on the road yesterday.” This was how she met him herself, when she was a girl. Among them are students who know English, others who know the official language, Hausa, and some who know only their local dialect. Sr. Caterina told us, “But they don’t need the words to understand.” They live off the land, they make a kind of beer called brutuku, and the women make their own earthenware pots. Many of them don’t yet have a paid job. They seem forced to live a life that is not life, but they get on with it. They meet regularly for School of Community under a tree amidst malaria-bearing mosquitoes, avid for those words. Bitrus told us, “The first time I met Fr. Giuseppe, I kept asking Sister who he was.” No explanation was enough for him. Sr. Caterina said, “He kept pestering me, ‘Who is he? How can he speak like that?’” She was grateful for seeing happen in Bitrus what had happened in the Apostles, and for having seen the inhabitants of Kona spending a month looking for a statue of Our Lady. The only Christian sign in the whole area was the small church in the village. They recovered a small statue of Our Lady and placed it on a rock on top of a hill. From that time, every August 15th, thousands of people go there on pilgrimage.


In their Sunday best.   Kona is a small village with a great history. The population of 4,000 has stood firm against the Muslims, who still continue to threaten them, and repelled Protestants who came there to prohibit dancing and drinking. Only Irish Augustinian missionaries found room in their lives. That was in 1948. This people has behind it 60 years of Christianity, compared with our 2,000. “Only 60,” repeats Caterina, “so it’s understandable that people here are still taken up by fear and hence they are easy prey to idols and magic; yet they have a clear perception of their dignity.” Most people here live in mud-built houses, but when they go out on Sunday, they are impeccably elegant and neat, and the women look like princesses. “Nigeria is a mystery,” she repeats to herself. “The difficulties are endless, and I keep asking God for confirmation, for objective signs to tell me if and how I should go on.” One evening, she was praying to Fr. Giussani, asking for this, when someone knocked at her door in the darkness. “I found there the son of a man I had known many years before, but hadn’t seen for ages. He had given the boy a letter for me, with a list of all I had done there, and he thanked me for it. I have stayed here for this reason, because there is always someone for whom it is worth staying.” There are objective signs, like the bond, though at a distance, with Fr. Giuseppe and the Memores Domini in Lagos.

“When I can, I go to see them, because I need to. After all, some youth from Jalingo have started to go to the vacations with them,” even in a place where it is almost impossible to organize anything. Here, the community “doesn’t live on rules, but out of human passion.” They go ahead as best they can, though they haven’t “a clear perception of the Movement,” as Rita says. “Some of them could not even tell you what CL is, but they live it, and they find it of interest for their lives.” They would not be able to explain the Movement but they are building it, like the young people in Lagos who are studying in the university. Halfway through June, they organized a “happening” for their fellow-students, without ever having heard of a “happening.” “None of us suggested it to them,” Alba and Barbara, two Memores who live with Rita, told us. They called it “CL week.” Five days of meetings, games, films, charitable initiatives, parties... They mowed the grass in the garden and hung up posters with phrases from the School of Community that had struck them. They used their initiative and their money. Barbara was astonished: “Crushed together in the African heat, they are asking for life, and they want others to see what they see.”


Faithful where everything betrays. In Port Harcourt, on the banks of the Bonny River in the Niger Delta zone, the same thing is happening. Fr. Giuseppe and Rita took a plane and went there, too. Reuben, a Nigerian engineer, working for Shell, moved there with his wife and children to work, after meeting the Movement there as a young man. At the time, he said he would never go back. “I had enormous difficulties in the first years.” But now he is back there, with a score of students who mill around him like a father. Despite the teachers’ strikes that go on for months, the unrest and the insecurity, and the students themselves who interrupt their studies to go to work, or who disappear for months, Reuben is there every Sunday to meet whoever comes, faithful where everything is unfaithful. “When you see things like this you can only stand and look,” says Rita, once, twice, three times. “We just look at it. They are flowers with which the Lord fills the roads so as to bring hope”–against all hope or prevision.

The young folks in Jalingo did not get lost while Sr. Caterina was away, and she seems to have no doubts. “The Holy Spirit never stops blowing,” she says quite naturally. After Fr. Giuseppe’s visit, Innocent immediately called her in Bergamo. “He was yelling into the telephone: ‘Sister, Sister, a miracle! A miracle!’ I asked him what had happened, and he said, ‘I met Jesus Christ.’ I answered him, ‘Good, keep on following Him.’”