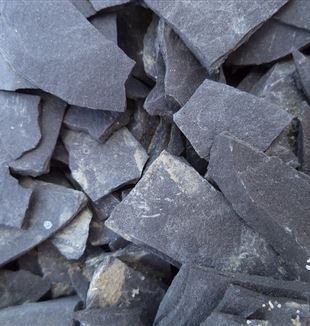 African Stones
by Vanessa Akello
It was a bright Thursday morning when we wound our way to the Acholi quarter in the Kireka slum in Kampala, the capital city of Uganda. Branching off the main road, we met women, young and old, breaking stones, some with children tied to their backs. With their faces grim and tainted with sweat, the women rhythmically shattered big pieces of stones into smaller ones. These stones will later be sold to road constructors and house builders. As we approach and greet them, the pounding stops and their faces suddenly light up with smiles. Later, we see that deep in the quarry are men, too, who are blasting the stones from the quarry.

Our visit to this hill is to witness the launching of a two-week initiative of breaking stones for the victims of Hurricane Katrina. The money from this hard labor will be given to the victims of Hurricane Katrina, specifically to the displaced families in Louisiana (Baton Rouge and Laplace) and Texas (Houston) for their needs for housing, work, medical fees, and schooling. In attendance at the event were AVSI Representative, Dr. Filippo Ciantia, USAID policy advisor on HIV/AIDS; American representative Ms. Amy Cunningham; local authorities of the Nakawa division; and friends of Meeting Point International and AVSI.
“I am moved by your gift, simplicity, and heart,” said Ms. Cunningham while addressing the people of Kireka. She was representing the Deputy American Ambassador at the event. “It is moving to see that people living outside the United States also care for America.”

Speaking to them in Acholi, Dr. Ciantia thanked them, saying, “Like the people displaced by Katrina, you have also been displaced by the war in northern Uganda. Yet you did not make this stop you from helping others in need.”

AVSI is fundraising as a response to Pope Benedict XVI’s appeal to Christians to show solidarity for the people affected by Hurricane Katrina in New Orleans and Mississippi.

Overall, the most meaningful position as a human being in front of such a disaster as Katrina or the earthquake in Pakistan was summed up by what one woman, Betty, said: “I have nothing and what I give is just a drop. But added to the others it will fill a cup.”

Sunday Collection
by Pippo Ciantia, Uganda AVSI responsible
Last Sunday, during the Masses in the Catholic churches of the Archdiocese of Gulu, the people’s offering was devoted to the victims of the disaster. Two weeks ago, Charles Kilama, Luisa Carugati, and Brother Croce met Archbishop Odama and presented the initiative. Msgr. Odama was taken with the proposal and decided to devote the Sunday collection during the Masses in the whole archdiocese for two consecutive weeks for the victims of the disaster. The Archdiocese of Gulu covers Acholiland, i.e., the districts of Gulu, Kitgum, and Pader. The area is affected by a 20-year-old conflict that has displaced 90% of the population in camps. More than one million people live in 105 camps, in abysmal conditions. These very people have offered their little contribution for Katrina’s victims! And they will do it again next Sunday! Moreover, in Kitgum, simple people and AVSI staff have already collected more than 350,000 Ugshs. In Kampala last week there was an extraordinary event. In the slum of Kireka, in the so-called “Acholi quarter,” an official of USAID in Uganda, representing the U.S. ambassador, witnessed the handing over to me of 1.6 million shillings. The women belonging to the community-based organization Meeting Point International, led by Rose Busingye, raised these funds. The people of the area are very poor, severely affected by HIV/AIDS and living in very vulnerable conditions. They earn their living breaking stones in a quarry. These women offered the product of their fatigue for Katrina’s victims. Amazing! Last Sunday the teacher Kizito Omala came to my office with two of his students, as a delegation of their senior class. They handed over to me 19,200 shillings, with letters of solidarity for Katrina’s victims, especially the young people. It was very interesting to discuss with them the main points of the leaflet “The Infinite present in America’s suffering”! Soon I will be able to send an initial update of the actual results of the fundraising in monetary terms, though I think that we have already collected about 2,500 dollars! However, the greatest achievement is the response of the simple people, internally displaced persons, people living with HIV/AIDS and young students. At the same time, I am struck by the testimony of Tibo, Kizito, Samuele, and others, who took up the proposal and made it an extraordinary opportunity of encounter and education to solidarity and care for the others.

I am grateful for his opportunity to be able to write to you. I am Aber Margaret and I am a volunteer at Meeting Point International. I was sad about the news of Hurricane Katrina and how it caused such suffering in your hometown. I decided to contribute to help you who lost everything as a way to share what you are going through. I am also praying for you that God may strengthen your hearts to live this moment and be with you. I also pray that God may touch many more hearts so that they may give even if they might not know you. As a person who knows what suffering is, I would like to let you know that I am with you all, most importantly through my prayers. Thank you.
Aber Margaret

I greet all of you, my friends in America. The news of Hurricane Katrina has reached me and I am saddened by the devastation it has caused in your lives. I send you my small gift as a sign of “my tears,” as a cry for what has happened in your lives. I identify with you because I know what it means to suffer. I am sick with AIDS and I know that anytime I will pass away, yet I am not afraid because I know that someone will take care of my children. Even now as I write you this letter, people who do not know me are already supporting my children so they can go to school. I pass on this love that has been shown to me to you as well. My gift is a sign of love that I was first given by people who did not know me. So the greatest thing in this world that surpasses even any suffering or sickness is love for one another. Thank you.
Akullu Margaret

Dear friends of America: What prompted me to contribute to the problem in America is that I don’t know those who helped me.

I am HIV positive and I have AIDS. I have learned that those who help me don’t know me; I can’t wait to have a lot of money to begin to give. If I have 200 shillings now then I give it to you now. Somebody I do not know has shown me love and I have decided to start today to share this love with this contribution which is a drop to be added to another drop. You are my brothers and sisters in order to share our problems but the most important thing is to share our love.
Thank you.
Betty Mukatijeli