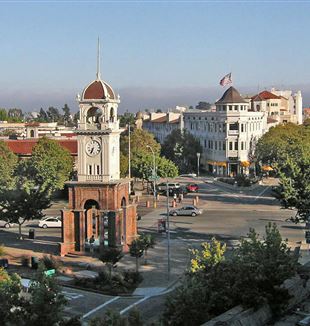 How much time is wasted in disillusioned comments about the poverty (and not the material kind!) of today! The creativity of a simple, concrete gesture was sufficient to rip sensationally through the veil of the artificial and stultifying turning in on oneself. All this happened in Asunción, Paraguay. A group of friends, linked by the desire to live life fully, organized a Happening (October 31 to November 7, 1998), with seven days of encounters, lectures, concerts, and exhibitions. The title itself creates a bridge to the roots of this people: "True charity is sharing." This was the rule in the Jesuits' reducciones, where one worked three days for the community and two days for one's own personal needs. To rediscover and relive this charity, the San Roque Gonzalez Solidarity Center in Santa Cruz, created by a group of CL members in the capital city, organized the event, to show various ways of living this virtue and of testifying to how it is possible to experience it even today. This has nothing to do with the aid offered by those who like to think of themselves as good, but is simply a recognition of the humanity that is in each of us and-even more-of the Event that is its foundation and goal. Charity cannot be the fruit of a perfection unreachable by human beings, but the result of a clear, confident gaze (even in all one's human weakness) on the One who made our existence possible. Once again, a reference to the reducciones, which "did not arise as the result of a perfect society, but as the organic response to the needs and demands of man's heart" (as is written in the presentation brochure for the Happening).

A chronicle of seven days
For the grand inauguration on October 31st, the Villarrica City Chamber Orchestra played to an audience that included the Papal Nuncio, Monsignor Lorenzo Baldisseri, and the First Lady of Paraguay, Mirtha de Cubas. The days following saw other concerts, a theatrical performance (Miguel Mañara by Milosz), a gala benefit dinner, a final party with various performing artists, and an exhibition on the most real and immediate example of charity today, Mother Theresa of Calcutta, with photos, videos, and lectures on the life of the Albanian nun and the Missionary Sisters of Charity, the order she founded. A woman from Albania, who lived and worked courageously in the streets of Calcutta, is a moving, real example in Asunción as well as in Milan, where another exhibition on her life has just recently been prepared. All this helps to show how charity is something profoundly human, above and beyond the various cultural traditions to which individual persons might belong.

This was also shown during the Happening in lectures and round tables, particularly one on charity, with representatives of various charitable institutions and associations as well as a conference (with the same title as the Happening) chaired by Giorgio Vittadini. Vittadini recalled the founding motives of the Compagnia delle Opere [Company of Works], in Italy and in Paraguay: "I work for you as though you were my father, my mother, my brother, or my best friend. It is not generosity, solidarity, or class unity, but a profound unity with those at your side. To live charity you have to start out always with a positive premise concerning other people; you cannot live individually, but only together with others."

Clear signs of the creative power of this position come from the various initiatives of the Solidarity Center presented during the Happening, particularly the Food Bank and the Juvenile Center currently being built. A living witness, too, is given by the numerous people helped in their search for a job or professional training. Neither flight, then, nor a New Age abstraction, but a profound and passionate connection with life in the constant desire to respond to the human needs of every person: truth and beauty.

Company even afterwards
What kind of life is there for young people shut inside a correctional institute? How can forced isolation be a means of rehabilitation for them? How can they be helped? To answer these questions, some friends in Asunción began in 1994 to visit the inmates of the city's juvenile prison, Panchito Lopez. Tracce has already written of this, in the February issue of last year.

Not even the worst crime can quench the desire for happiness that each person contains within himself. The unexpected fruits of this friendship were not long in coming: 14 prisoners, a couple of years after the friendship began, requested and obtained the sacrament of Confirmation from the auxiliary Bishop of Asunción, Msgr. Adalberto Martinez.

The fact remains that, as Marcos Isfran (one of the young people involved in the prison project) affirms, beyond the progress made to a greater or lesser degree by the inmates, "we are the ones who live the first experience of an important change, because we want to learn to be with people freely. We can be sure that they too recognize when someone wants to hug them and accept them as they are, without asking for anything in return, and this is something great for any person."

From the activity inside Panchito the idea arose to build a place where these young people can go when they come out of prison, as they often find themselves stuck back in the same difficult situations that led them to crime in the first place. The plan is to continue the work begun inside the prison, placing these youths in a position to reintegrate themselves into the daily reality made up of relationships, study, and work. Specialists-doctors, nurses, psychologists, social workers, educators-will work in the new center being built on the outskirts of the city. What is the origin, what is the source of such careful attention? The source of this work is the desire that these youths feel the worth of their dignity as human beings, and with that they feel sufficiently equipped to start out again in everyday life. Everyone needs a friend, a house, a place where you feel welcome and valued: this is what the Juvenile Center intends to be.

The project will follow certain main stages: education to community life, through the acceptance of basic rules for living together and for personal care; an awareness of personal and community responsibility, acquisition of a sense of study, work, and the family, to the point of achieving self-mastery and the rational use of one's responsibility and freedom; all for a total, positive reintegration. The Center will contribute to the reinsertion of these youths into the work world and will look for suitable places of residence in the cases where the family context is inadequate.