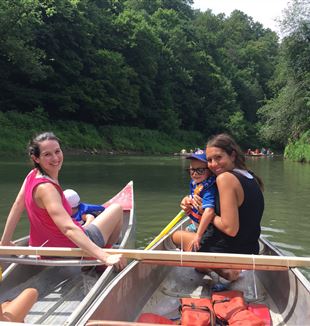 In 1982, Fr. Luigi Giussani spoke at a retreat for high school graduates saying, “In life, it is important to build. So, whatever point you are at, even if those particular circumstances seem to you to be less than ideal, even if they seem a bit painful, please, go through them! Remember this aphorism: You shouldn’t sink in the circumstances but navigate in the circumstances.”

Thirty-six years later, a fraternity group heeded Giussani’s advice while navigating, quite literally, Minnesota’s Root River. On the third day of their summer vacation together, they took off on a two-and-a-half-hour canoe outing with 50 adults, 41 children, and 26 canoes. The trip was thought out by three Minnesotans who wanted to give the group a taste of the area while making sure that both children and adults could safely participate.

Despite the precautions taken, the uncertain nature of the endeavor was met with some resistance. “It was pretty unanimous that that was a crazy idea. Many of the people had never been on a canoe before and they would have been thrown into the water without any training,” said P.J. from Minnesota. Many members of the fraternity, in fact, held reservations about the trip; Some did not know how to paddle, others had infant children they did not want to bring on board. After the idea was presented to the group, a few mothers even met up to discuss why they should not attend the following day. “Talking to these women, it was evident that each one had twenty-thousand reasons not to go and not to bring the kids,” said Maria, who was at the vacation with her husband and their eight-month-old son. “I was practically convinced I wouldn’t go.”

In spite of the many reasons to be hesitant, all but two moms and three children went on the outing the next day. What changed the way they faced this apparent adversity were not canoeing instructions but trusting another; Confidence and trust in another allowed them to take the leap, in spite of their apprehension. “People were scared, that was very clear,” said Gary, who helped arrange the excursion. “It was a difficulty, but being together like that and being assured of the certainty of the people around you and the confidence in people around you, emboldened everybody to be able to say, ‘yeah, I can do this.’” While they prepared to head out, as Jon explained, “It became a moment of people reaching out and saying, ‘I’m staying with you in this thing that is seemingly difficult, hard, or impossible.’” Maria, who was concerned about her infant child, for example, took heart in the presence of a friend who encouraged her and said he would stay with her, and who she knew cared about her and her family. “He said to me, ‘If we are proposing this trip to you and to everyone here, you can decide whether you want to follow it, first and foremost, for your own vocation, or whether you want your criteria to be following whatever seems safer, more secure, and more appropriate for your little child,’” she said. “This left me very free because he didn’t tell me I had to go, but he said that, in that moment, that trip was being proposed to me, […] and that the first thing we have to do for our children is be concerned about our own vocation, even above theirs.”

The group, still a little hesitant, took off on their canoes. After an initial mishap involving a tipped over canoe and a momentarily floating baby, the trip went smoothly for everyone, and all those involved reached the end of the excursion elated to have participated. The peace and natural beauty of the Root River only partially contributed to people’s striking experience. On this endeavor, many made a discovery that extended well beyond the canoe trip, and even beyond the vacation: the beauty of the Christian community is that it allows one to risk. This understanding came on gradually, Jon explained, as a striking personal change. “We might say yes because of formality, we might say yes because we feel obligated to do so, we say yes for whatever reason. People’s hearts didn’t naturally change until we were doing the thing, until something happened on the actual trip.” This discovery was a surprising one for many, and it proved to be a chance to reflect on one’s own prospects, designs, and willingness to risk. “It was so far beyond my expectations of what I thought that trip was going to be and what it could have been,” said Gary. “My idea of it was so small but the reality of it was just so big and so overflowing it was really incredible. […] It makes me want to risk more, honestly, with other things too; not just this canoe trip or how we do a vacation, even how I live.”

Several who were concerned before and during the initial stages of the trip, found something precious in following before even truly understanding what they would be embarking on. As a result of this following, each individual made his or her own personal discovery. Some, like Maria, found that the trip allowed them to evaluate how they were educating their children. “You realize that your criterion is small and that, if that’s all you follow, it suffocates you and those you drag down with you, like your husband and your children,” she said. “When you follow a greater criterion, you may do things that seem a little crazy, but I could breathe on that canoe trip. I was happy, and it served as an example of how to move in general and with my son.” Some, like P.J., discovered that “there is merit in trusting someone,” and others, like Gary, saw that there is something beautiful and liberating in leaving one's safe spot. “There’s more there for you if you risk. Taking that risk is where you have the opportunity to see something that is so far outside your idea, and to see […] what God has in store for you in all of reality.”

The canoe trip is the epitome of our companionship. Following, we can fearlessly climb into our own canoes—whatever they may be—and take on the journey, knowing we can risk because we are taken care of. “The risk in following is saying, is it true that following this place is the thing for me, or do I have it figured out? That’s the whole claim, is that there’s something here that is more important than the ideas that I have,” said Jon. “That’s where you start to ask that question: Is it really true that this is where He is present, or not? […] I think, for all of us, what the fraternity is evolving into is the place where we can say that this truly is the place where He is present. And so, it changes everything.”