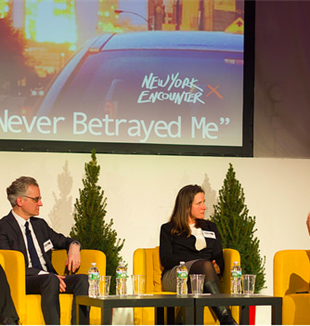 “We are introduced into the world through hunger. We are introduced into family relationships through hunger, at the mother’s breast. Hunger is one of our primary responses to reality. What does it mean then,” asked Fr. Samuel Fontana, Associate Pastor of St. Joseph Church in Rayne, Los Angeles and moderator of the panel, “to eat well?” In the U.S. we constantly hear about eating healthily and eating ethically, but are we, perhaps, missing something?

As a child, José Porro, a Systems Analysis and Design Director, told the audience, he repeatedly collapsed, spending weeks on end in the hospital, only to be left with a body that could not tolerate the most basic of human needs – food. When the doctors told him to avoid the fiber found in fruits and vegetables, he began to survive on junk food, which did nothing to improve his health. Because of his sickness, he came to hate food, and eating became anything but joyful. At the same time, he became isolated, bullied by his fellow students because of the accommodations teachers made for him during the school day.

However, all of this changed when he met his wife. She convinced him to try a new food – quinoa – which, despite sending him to the hospital for a few weeks, became his entryway into a world of delicious foods, as well as physical and psychological healing. Eventually, his wife invited him to the local farmer’s market, where he got to know many farmers and to learn about where his food came from, gaining a deep appreciation for the rhythms of nature the art of farming. “I really started deepening relationships with the people who understood food the most, and I think that made me appreciate the food in a way that I didn’t before,” he said. He explained that through his relationships with people, the farmers he met, a new doctor he found, and particularly through his wife, he was led toward a healthier and more joyful relationship to his body, to his emotions, and to food itself. “Before, I ate alone, I usually ate in my office, one hand with the food, the other hand on the keyboard,” Porro said. Now, he takes the time each day to give respect to the needs of his body, to the food he eats, and to the people with whom he shares his meals – be they coworkers, friends, or family members. 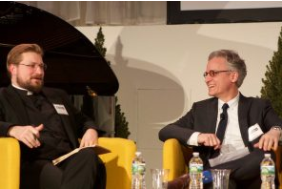 “Most eating problems begin for three reasons,” explained Ginny Laracy, a therapist, “first, some sort of emotional disconnect that comes along in the family, that makes the person disconnected from their own emotions, their own feelings, and disconnected from other people. The second is a physical disconnect that takes place, where someone can either ignore their hunger, or eat way beyond their hunger, and not listen to their body, and the third is a denial of reality or a denial of acceptance – of how someone looks, of what their body can handle, of what their body can do.” Laracy noted how specific eating problems become a metaphor for other behaviors; a patient of Laracy’s named Marie,* who restricted her eating, also cut herself off emotionally from her family and friends, trying to protect herself by remaining emotionally closed. Laracy explained that she assists Marie and other patients through various forms of group and individual therapy, where they become free to rebuild a relationship with food, and to reconnect to themselves, to others, and often also to God. She described a method called “intuitive eating,” where one re-learns to pay attention simply to when their body is signaling hunger and satiation, setting aside the feelings of guilt, shame and fear that are often associated with eating choices. In group therapy, patients and therapists share meals together, and then learn to reflect and discuss their emotional responses to them. She explained that such discussions allow people to understand their feelings and habits surrounding food rather than entering into the chaotic violence of compulsive eating behaviors, and this reconnection with emotions facilitates the rebuilding of relationships with family members and friends.

In today’s world, Laracy explained, even people without an eating disorder or eating problem often engage in problematic eating – they eat on the go, or the whole family is on their iPhones; they aren’t connecting to each other or to the food, and people aren’t connecting to themselves. This was a central theme of the reflections offered by Karen Le Billon, a popular author on children and food as well as a professor at University of British Columbia and a Rhodes scholar. She and her husband and their two picky daughters, who were accustomed to snacking all day long on junk food and refusing to eat vegetables, found themselves for a year in the small French fishing village where her husband grew up. “We arrived, and my kids were at the local preschool and school, and unbeknownst to me, they were about to undergo a French food education. Now, I had a busy relationship to food – I would shovel it in, I would eat over my desk, it was an afterthought. We had snacks everywhere – in my pockets, the back seat of the car, the stroller. And all of this was about to be undone. And the reason is because for the French, eating is a secular sacrament.” 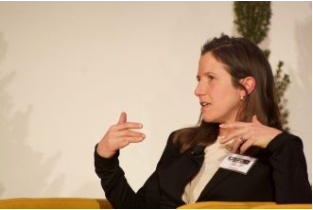 Le Billon went on to describe how in French schools, all children and teachers eat a freshly prepared meal together at lunch. No snacking between meals is allowed, and until twelve years old, everyone is given the same menu, after which they may be able to choose between two options. There is plenty of variety, however, because students are never served the same meal more than twice a month. The food is simple, but always good, and the children are required to stay at the table for at least thirty-five minutes. This “French food education” completely changed the Le Billon family’s life – eating together and following a routine freed them from their busy-ness surrounding food, and by the end of the year her daughters were happily eating artichokes.

The theme that emerged most clearly from the discussion between Porro, Laracy, Le Billon and Fr. Fontana was that of connection – connection to oneself, to others within a community, and to God. That a disconnected relationship with food can either be a cause or a symptom or a disconnected relationship with the rest of reality is striking; perhaps even more striking is the fact that these relationships can be re-integrated and healed in a way that brings a resurgence of joy.