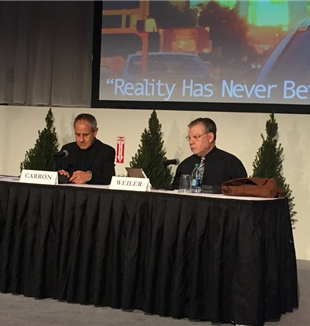 Shortly before walking onto the stage to interview Fr. Julián Carrón about his forthcoming book, Disarming Beauty, Joseph Weiler walked off of a plane, having spent the previous 22 hours flying to New York from Singapore. Perhaps this exhausting reality of international travel prepared Dr. Weiler to engage with Fr. Carrón in a difficult discussion about the harsh realities of our contemporary world.

After briefly listing some of the monumental and devastating events of recent years, including various acts of terror and the migrant crisis in Europe, Weiler noted that Carrón’s “bold” book is important in today’s world. Calling it a “balm for the soul” with a “soft, caressing style of writing which should not obscure a very sharp message,” Weiler said that it calls Christians to examine both how they “confront reality” in a faithful way and how they can “communicate the beauty of a life of faith.” Carrón himself described the goal of the work in a similar way: “I wanted, with this book, to verify if Christian faith could resist in front of these challenges and make a contribution.”

Weiler’s questions held Carrón to this project, focusing mainly on two fundamental problems facing society today: education and the family. As Carrón put it, “one of the most important challenges present society has” is that of “educating people … in a way of reality that cannot end up in violence.” He believes that strictly religious or psychological explanations for the types of violence that have sprung up in the past years are inadequate: “this is not a religious problem … this is a problem of society.” Secularization, both inside Christianity and out, leaves people “without any root” or “point of reference.” When one is given no meaning, what is possible in life but violence? Weiler encapsulated the modern crisis of the family in simple terms. Most basically, it is not the rise of same-sex marriage, nor the acceptance of abortion, but simply the fact that “people don’t make children.” “How can you have more than three children?” he once heard someone ask. “Automobiles only have five seats in them.” While Weiler did list some encouraging reasons why those within faith communities approach the family differently, he at the same time questioned the faithful’s ability to change the thinking of those engulfed by today’s post-Enlightenment, Neo-Kantian, materialistic culture. The divide between those with the roots of faith and those without, he thinks, might simply be too large.


Carrón’s hopeful approach to both of these challenges is the same. Although he acknowledges the radical divide between a secular life and a life of faith, he thinks that beauty can bridge it. In a world where freedom is the “most important value,” Carrón believes that personal testimony can draw to faith, love, and meaning those living in their absence. As one example, he presented the story of a couple who, previously having no interest in creating a family, decided to get married after witnessing the great love of a Christian family they befriended. “There is no preaching,” Carrón said, “only that the beauty is contagious.” While “appealing to ethics” may be useless in today’s world, “this is enough, to move the deepest part of the heart in somebody.”

Carrón concluded with a reflection on the Christmas season that reveals the personal root from which this witness must blossom: the relationship of each Christian to Christ. Just as “the invisible God has become visible, tangible,” so too our faith must become a lived beauty through which others can encounter God’s incredible love.