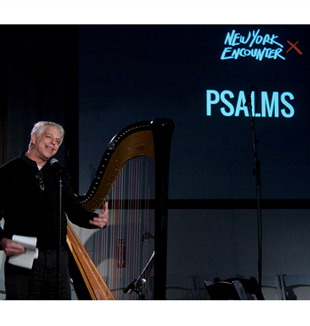 Just as energy levels for the 7th annual Encounter were starting to dwindle, revitalization came forth on Saturday evening, after a long and beautiful day of several talks and exhibits. The Psalms, a concert that featured two classical music groups, began with an introduction by the concert organizer, Jonathan Fields, a Jewish convert to Catholicism. He said that his Jewish mother has recently become very concerned with politics, and wondered whether there could be some other approach to things beside the left and the right? He told her, “We need to look at the heritage of our people, David the Psalmist … Let’s see if [hearing the Psalms performed can] help my mom and if they help you.” Fields wrote in the concert program, “The aim of this concert is to reach what seems to be an almost forgotten aspect of experience. This is the realm of the sacred.”

A central focus of the concert was the harp, played as a tribute to King David himself. Of the twelve pieces performed, five were harp solos, played by Contemporaneous member, Marilu Donovan. Contemporaneous, a chamber group led by co-founder David Bloom, boasts 21 classically trained musicians from the New York City area. Dedicated to bringing new and recent music to life, Contemporaneous graced the New York Encounter’s audience with a flute quintet, as well as accompanying performances with the choral group, GHOSTLIGHT, which was conducted by Evelyn Troesar DeGraf. The vocals included pieces in English as well as Latin and each piece varied from the others, according to the composer and the composer’s inspiration; this variation echoed King David’s many tones throughout the beloved Old Testament book of Psalms. 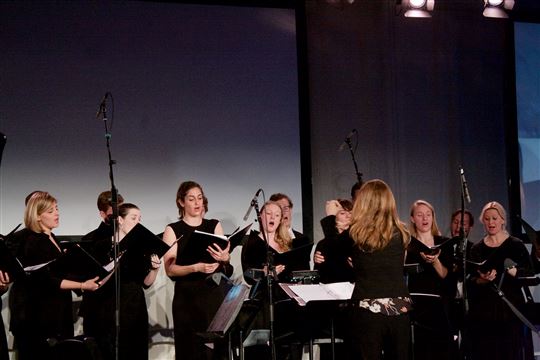 Each piece’s composer was present at the concert and Jonathan Fields thanked all of them at the end. What was perhaps the most striking thing about the composers was the range of experience they had; Gabriele Vanoni, for example, holds a PhD in Music Composition, while Jacob Elkin and Justin Fields are undergraduate students at CUNY Aaron Copland School of Music. Other composers featured were: Timothy Dusenbury, Jonathan Fields, Sebastian Modarelli, Andrew Bloch, and David Horowitz. The composers’ range of styles and interests, moreover, most certainly enhanced the evening, and each of the pieces was as beautiful as the next.

Fr. Luigi Giussani wrote, “The Psalms are a form of dialogue defined by God Himself for His relationship with the people He has chosen … The sweep of the Psalms tells this history with the power of poetic song.” Despite any fatigue that might have been felt throughout the New York Encounter thus far, the Psalms concert most certainly brought a new hope and a moment of beauty for all who had the opportunity to hear it.#NewYorkEncounter