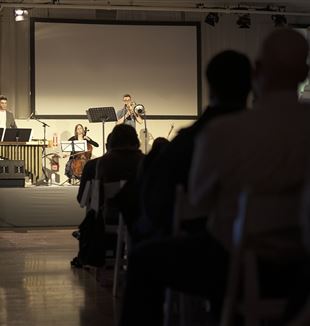 If you haven’t heard Leonard Cohen’s “Suzanne,” maybe the best way to introduce yourself to the song is through Joan Baez, who covered it on her album “Carry it On,”–a title that now seems dated, albeit apropos of the zeitgeist of 1971. Despite how cliched some of the trappings of the Vietnam folk era have become, there are pieces to be culled from it that have retained their original relevance because they address something perennially human, and “Suzanne” is one of them. Based on Cohen’s relationship with Suzanne Verdal McCallister, its melancholy take on how we are drawn to the fringes of things is emblematic of what human desire is. Cohen’s singer cannot help being drawn to Suzanne, in spite of how she “feeds him tea and oranges,” and “tells him she’s half crazy.”

“Suzanne” was one of the many songs culled from the American songbook and from the American poetry canon for Shaw Street Collective’s introductory piece at this year’s Encounter. Emily Green, a pharmacist from Denver, along with three other friends, Brianne Johnson, Alessandro Navacchia, and T.J. Berden, in addition to the Shaw Street Collective, a “New Classical Ensemble dedicated to the creation of works, the re-imagination of chamber music, and educational outreach” pulled together the amalgamation of poetry and song, beginning with Edgar Lee Masters’ “George Gray,” from his Spoon River Anthology, in order to elaborate on the Encounter’s theme this year, a riff on Gray’s “boat longing for the sea and yet [not] afraid.” Through music (cello, marimba, trumpet, trombone, and guitar), the presentation explored the theme of desire and fear as it is expressed in Masters’ work, as well as the work of myriad others who are part of the American canon, from Whitman and Dickinson to Robert Frost, Dylan, Poe, and Angelou, in addition to Langston Hughes, Paul Simon, Eliot, and Eugene O’Neill.

The piece began with a low vibrato note on cello, subtly accompanied by marimba, to underscore the tension as Jacob Donaldson recited the beginning of “George Gray.” Gray’s sadness is then countered in a kind of call and response between desire and fear, through the various other poets’ works, accompanied by music of a similar nature that underscored its significance. (At a reading this past year in Washington, D.C. given by Irish poet Paul Muldoon, who also writes songs, when an audience member asked how he knew the difference between producing a poem and producing a song lyric, Muldoon responded by saying how song lyrics need music to work, while poetry can stand on its own.) This is perhaps the one drawback to the performance, in the sense that accompanying works like a speech from Long Day’s Journey into Night with music can tend to render the words melodramatic, although for the most part the musical accompaniment managed to be subtle and non-intrusive. Vocal work by Emma Rowlandson-O’Hara and Mikolaj Debowski evinced an earnestness and poignancy that were affecting to say the least. The two of them breathed life into songs that have been sung for a long time by a lot of people, and you got the feeling they were talking to you when they sang. 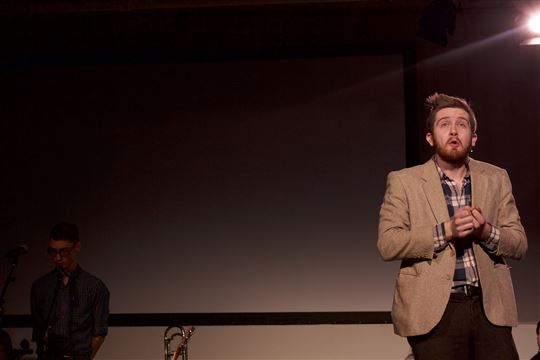 According to Green, the group had gotten together over a series of video chats, submitting different works to each other they thought were appropriate for the theme. “For every person involved in this,” Green told me afterward, “the questions are real. There was something that happened to us in this dialogue between fear and desire, which we want to communicate.” She also remained impressed by the lack of tension among them as they suggested different works to each other: “There was an obedience to what was emerging together,” she continued.

Perhaps the most surprising element was the fact that no rehearsal happened with the Shaw Street Collective, and the words and music, after having been prepared over the various Google chats, were put together at the time of the performance.

Cohen’s lines, interspersed throughout the evening, that Jesus was a sailor/And He spent a long time watching/ from His lonely wooden tower/ and when he knew for certain/ only drowning men could see him/ he said all men will be sailors/ then until the sea shall free them were perhaps the most summative of the entire performance, in that they underscored how, in all the various works’ expressions of what it is to be human, a God who reaches out to the drowning is the only hope, so that even in a culture where fear can tend to dominate us, it is not we who are required to undo it, regardless of how much of George Gray we have inside us.

Watch for Shaw Street Collective’s EP, which will be out this February 20.