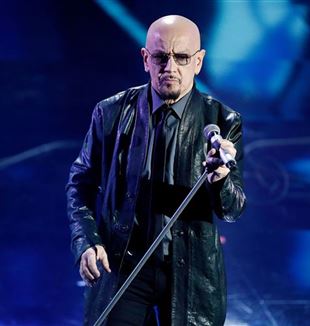 He was in his car, heading to Veneto for a concert, listening to the "vacuous, not very genuine" songs that, especially during the summer, are constantly played on the radio. "Disheartening. I kept changing the channel," says Enrico Ruggeri. Until he heard the voice of Bernhard Scholz, president of the Meeting, live from Rimini. "He was introducing a meeting. When he has finished speaking, before the guest he was introducing took the floor, there was a big round of applause, like at a concert. I thought: ‘So there are people who do not just spend their summer listening to songs.’ The reflection of Javier Prades, a Spanish theologian, on the title of the Rimini Meeting, ‘The courage to say I’, came on the radio. "I listened to it all. Until the end." He was surprised and impressed, explains the Italian singer-songwriter, born in 1957. So much so that he posted on Twitter immediately afterwards: "From Kierkegaard to Pirandello to Queen, from existential questions, philosophy, current events. The world is not just tissue paper."

"So many likes and comments, I had not expected that. Instead, reading them, I realized that others were interested in it too," he says. Not that it was a different perspective from usual. "There was a particular perspective. The word perspective already implies someone who looks at something in relation to something else. That is already a lot, particularly in an age in which we do not look at anything… I am not talking about the moon, but not even the finger that points at it." And then there was that great applause. “From the ‘tone’ I imagined that many young people were in the room." This was surprising, he adds, also because it was a priest speaking from the stage. "When I was a child, the priest was an important component of our education. I remember churches that were full, and often what he said made a difference. And there were some great priests. Fr. Giussani was one of them, for example. Many today seem out of touch... Then you hear someone like Prades, who speaks in a dynamic, interesting, profound way". 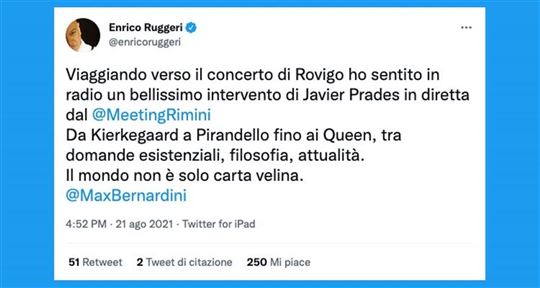 It is not a matter of any particular affinity: "It is not that I am a Kierkegaard fanatic. But the idea of philosophy linked to life and that is not just 'sophistry and catchphrases' excited me." From the very beginning of the pandemic, Ruggeri stressed that philosophers rather than virologists were needed to face what was happening: "The issue is deeper than a simple epidemic, it concerns the structure of the human. We closed ourselves in our houses for fear of not getting hurt, of not dying. Like insects, whose only problem is getting crushed. Fear of dying is an obsession that prevents you from living." But Covid has only brought out something that was already there before. News reports, sayings: "We often use the word death in a figurative sense: dead end, deadlock…But if someone really dies we say 'he has gone, he has passed away'. Death is a taboo". And so? "For those who, like me, believe that death is not the end but a beginning, knowing that it exists does not prevent one from living".

His thoughts go to the ancients. To the biographies of Herodotus, where every page about a character's life is accompanied by a description of how they died. "Any judgment on them also came from how they had dealt with death." And today, what does Kierkegaard's phrase that served as the Meeting's title, "The Courage to Say I," say to you? "If I met Kierkegaard I would tell him that today the 'I' is polluted by so many 'external' factors. For him, the defense of the 'I' supported noble goals. Today, in the world in which we live, it is the affirmation of the self. More than inner growth, it is society's push for ambition and success. If as a boy I want to be a singer, because I believe that I can write interesting songs and I wish to dedicate myself to this, not even I can draw the line between my desire to express such a pure feeling and my desire to succeed. Society pushes you to compete. And the "I" today can hide moments of selfishness and subjugation to success. An illusion..."

Read also - The crack and the light

This comes from a guy who did not shy away from being himself and was not afraid of criticism: "I fought back. Then again, I am now at the age where I can be free to say what I want. But I have always defended an ‘I’ that thinks, that narrates in my case. And in a society where the mass is often more important than the individual, this is already an edifying battle." He speaks of a society of unhappiness, of dissatisfaction: "I did not say it myself, but I like it: we often buy things we cannot afford and that maybe we do not even like in order to impress people we do not even respect. Many people think like this. A society structured on this constant unhappiness, without which it could not even stand up, is disturbing.” Ultimately, it is the ‘I’ reduced to the search for a consensus. "I do not think I am like that. At least not that much. Being oneself, having that courage, is a rare commodity today. Especially for those who are public figures". Singers, actors, politicians, bound to a certain image and to the public’s response. And how is it for you? "I have nothing more to ask for than what life has given me. Sure, if there are more people than you expect at a concert, you are happy. But I do not feel a spasmodic need for consensus. I recount life and life is spectacular. I do not think that I will ever be able to love my neighbour as much as myself, but I am certainly interested in them as much as I am in myself. People are interesting, the life of any human being in the world is interesting. And you could produce a movie or song about any one of us. I recount this, I produce songs the way I want them to be. And this today, for me, is the desperate defense of the self. Maybe Kierkegaard would like it...".