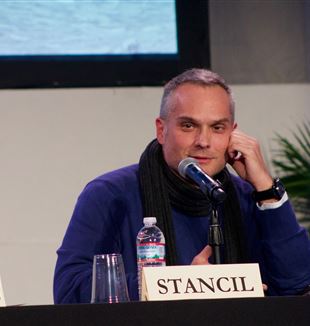 On the occasion of the beginning of the Jubilee of Mercy, we had the chance to meet an exceptional witness. For more than 16 evenings, Joshua Stancil, a former prisoner for 18 years in a North Carolina correctional facility, told us how mercy touched him. In a recent interview, when asked about what moved his heart to highlight the theme of mercy, Pope Francis said, “It came from within, the Holy Spirit wants something. The Lord wants to show His Mercy. The world needs compassion, it needs to discover that God is Father, that there is mercy.” Joshua made this discovery after the first 6 years spent in prison. After contemplating suicide more than once, and tormented by his inability to accept his own situation, he met “God’s revolutionary tenderness” through a strange and bizarre coincidence. Some people, who he didn’t know, who were connected to a priest from Milan, had written something interesting on a monthly magazine, and they started to visit him regularly. They would drive for hours in order to spend 90 minutes with him in a bleak visiting room of an American prison. “I didn’t want visitors; I had simply asked if anybody could provide me with some writings in English by Monsignor Giussani.” They kept visiting him, and his life began to flourish again; little by little all aspects of his life became permeated by something new. “I had always wondered how I could understand if I had been forgiven, indeed even forgiveness could be just a sentence…but how could I be certain that I had been truly forgiven? On the day when two of those new friends, Rick and Chiara, asked me to be the godfather of their third baby girl… it was then that I understood that I had been forgiven. That was the Church that I had never met before.”