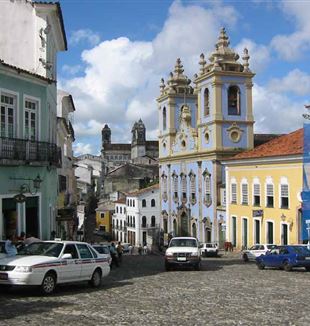 José Eduardo Ferreira Santos is 26 years old, but he seems younger. He looks like a high school boy, a bit of a bookworm, thin, but likeable and quick-witted at the same time. He says, “I’m 26 years old,” and suddenly he appears older than his years. For he says it gravely, as though in an instant he were reviewing his brief but very long life, long because of what he has seen, what he has been through, because of how he has grown up, year after year, among the alagados of Salvador de Bahia, the horrible stilt houses along the shoreline of the Ribeira Azul, the shacks that correspond to the favelas of the other cities in Brazil.

“Eduardo” in Brazilian inevitably becomes “Eduardiño” and brings to mind visions of an acrobatic soccer star. The nickname “Diño” is pronounced phonetically in Portuguese “Giño,” and so the Italians of the AVSI in Bahia call him Gino. So do the Bahian children who attend the John Paul II Educational Center, an oasis in the desert, as it were, of the violence and degradation of the alagados.

Eduardiño tells his whole personal history, and you realize immediately that his story cannot be separated from the entire experience of the Educational Center, from the alagados and what has been done by AVSI and by many others in Salvador de Bahia. “Giño” is the testimonial of a conquest of humanity, of an authentic human redemption after going through the hell that the ancient, splendid Salvador, described by Jorge Amado, can reserve for many of its children.

You can get a vague idea of the Brazilian favelas, the houses made of cardboard that tourists look at from afar. You actually have to go see the alagados to understand their terrible reality. They are houses made of wood and cardboard on the ocean, pile dwellings built on the sandy bottom just as was done at the dawn of human history. The stilts stuck crosswise in the sand become tragic “wooden blades” when the tide goes out, then to become foundations of a house that makes no sense when the tide comes in. To move about between these pile dwellings, you have to walk along nightmarish suspended bridges, being careful that no child is impaled on a stilt or falls into the water.

In 1992, when the project was formulated to rehabilitate the alagados, moving the families that lived in them into houses along the coast, Eduardiño was little more than 15 years old. The splendid bay of Ribeira Azul could only be intuited or imagined, because the sea was almost completely covered by pile dwellings. It was impossible to see the beach or the stupendous design of the coastline. The hypothetical urbanization and industrialization of the interior of Bahia had turned into a tragic failure. Thousands of families had left the Brazilian interior, the countryside, moving toward the great bay of Todos os Santos in search of work and housing. The factories went bankrupt and the houses were never built.

Struggle for survival
Within those pile dwellings lies the desperation of people who have been uprooted and have no prospects for their lives. In that whole section of Bahia, 150,000 people settled, defending this latrine tooth and nail to survive, maybe even shooting at the police to avoid being evicted from that tiny scrap of sea that has become an open sewer.

Sonia Fontes, a member of the Parliament of the state of Bahia, admits today, “Faced with that situation, we didn’t know where to start. And as politicians, we even made mistakes, we wasted time in abstract recovery plans. We almost forgot about the indispensable human contact with those persons. I will say even more: we did not understand what the AVSI workers were doing.”

For there were those who, in the face of that human tragedy, had gotten it into their heads that something could be done. Grief and desperation could be shared, advice given, food brought, the children and sick cared for; one could hope to arrest that climate of violence and degradation. The simple, exemplary act of charity, which Fr Giussani had taught so many young people in the 1950s, had not produced new Catholics, but above all new men, new citizens. Working and operating out of charity among the alagados were not only CL people like Livio and Anna Michelini, priests like Fr Giancarlo Petrini, but even radical leftists like the “Lazarus of Vicenza,” who lived within four walls on the edge of the Ribeira Azul. Those “madmen” had gotten it into their heads, contrary to everybody and everything, that they would clean up that environment, where stabbings and pistol shots were the daily fare for anyone who lived there or passed through.

Every other day
In 1992, there was an industrial building behind the alagados. And there, in that building, the kids from the alagados would go to eat a full meal, every other day. Eduardiño, too, stood in line for his turn and when, as happened also to so many others, he had to skip the meal on his off day, he would cry out of desperation and the hunger pangs gnawing at his stomach. Then he would return to his so-called home, with his siblings and his family, after passing through scattered scenes of every sort of violence. Eduardiño’s father was, and still is, a bananero, a fruit vendor. As much as possible, Eduardiño has always helped him. But every so often, “Giño” would take a long walk, all the way to the center of Bahia, to Pelorinho, to Amado’s house, to the square of the “pole” and the “cages” where rebellious slaves from Angola were put. Pelorhino was also a slum, there too were desperate people, but there were also the testimonies of the first missionaries, the big churches, the Portuguese Baroque cathedrals. “I was looking at the windows of a church, fascinated by that beauty. A priest came up to me, Fr Giancarlo, and asked me, ‘What are you doing?’ I explained what I was doing, where I lived, how I lived. I saw him again and he helped me.”

Life turned upside down for Eduardiño from that very moment. Today he says, “I have lived with violence and death. Where I lived, where I still live, life has no value, it has no meaning. How can you grow if life has no value, no meaning? I intuited, when I was living in the degradation of the alagados, that what our life will be is determined when we are young. And paradoxically, I saw that the others my age, the most intelligent, sensitive, curious, threw themselves into drug dealing, among bands of criminals, or died of alcohol or drugs. A brief life, an instant of time consumed in a desperation surrounded by hypocrisy, cynicism, and widespread indifference.”

A degree in pedagogy
But Eduardiño had a stroke of luck and grace. Through the mechanism of long-distance adoptions, an Italian who doesn’t even know him paid for his education. José Eduardo Ferreira Santos is an intelligent boy, and he made it through: he studied and earned a degree in pedagogy. His father is still a bananero, his pile dwelling has become an acceptable house. But Eduardiño was destined to end up in the pages of a book. His thin figure, that of a quick-witted boy wearing glasses, became the symbol of the ransom of an entire human community. This, too, happens in life.

For while Eduardiño was growing up, studying, and getting his degree, even the Brazilian and international political agencies, like the World Bank, were realizing that the charitable work of AVSI had led to a credible authentic program of urban rehabilitation of the alagados. The alagados were slowly divided into rehabilitation lots, houses began to be built along the coast, the houses on the beach were repaired as much as possible, the first pile dwellings were removed, and the Ribeira Azul was once again the enchanting natural setting it had been for centuries, with an ocean the clear blue color of a swimming pool, flamingos hunting for fish, sand and palm trees on the beach. Eduardiño gazed enchanted at that first “miracle” and thought about what still needed to be done. In the meantime, he worked as a tutor in the place where he grew up, the educational center donated by Angelo Abbondio, an Italian financier who will never forget his first visit to the alagados.

Now, while the recovery plan of the alagados goes forward, Eduardiño watches the younger children playing ball, studying, and eating regularly (they too eat every day now). He works with Enrico Novara, Pina Gallicchio, Cesare Simioni, Benedetta Fontana. He came to the Meeting for Friendship Among Peoples in Rimini. If the Twin Towers had not collapsed, he would have gone to address a UN meeting in New York. When they told him this, he veritably staggered out of shyness and incredulity. In Rimini, talking to the journalists, he said only, “I would like to change the life of my kids, just as Fr Giancarlo changed mine. How? By meeting them.” A word that may be the best guide for interpreting the globalization about which there is so much abstract talk these days.