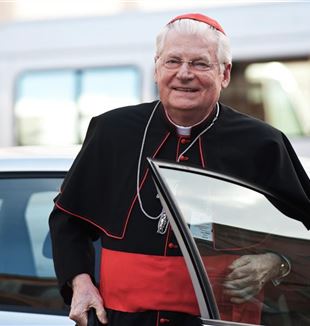 In talking about the figure of Fr. Giussani, I cannot overlook the first time I met him. It was around Easter 1958. At that time, during Holy Week, the Christian community proposed three moments of reflection to high school students from Lecco, for which the last two hours of class were cancelled. We would all go to the Basilica of San Nicolò to listen to the meditations given by priests from Milan.

At that time, my involvement in the life of the church was weary. While remaining faithful to Sunday Mass and without cutting ties with the Church and the Azione Cattolica association, I was now more interested in politics and in Russian and American literature than in faith. I thus entered the Basilica passive if not bored, and at the very last moment before the event began. Fr. Giussani (I would only learn his name later) was standing in front of the microphone, developing the topic of his meditation, "Youth as Tension." It sounded like something unique to me. I had been expecting something else, something already known: a series of Gospel quotes ending with the usual ethical advice.

Giussani, on the other hand, was talking about freedom in action, seeking the fulfilment of the evidences and needs that lie within the heart of each of us. Remarkably, in "Giving One's Life for the Work of Another," the volume that collects the lectures and dialogues of Fr. Giussani's last Exercises of the Fraternity of Communion and Liberation, this topic is picked up on again as the way to a solid connection with reality (ontology) and the discovery of an authentic morality that follows.

"Just as obedience to the Father,” says Giussani, “represents the source and the summit of virtue for the man Jesus, so for man morality is born as prevalent, irresistible liking for a person who is present: Jesus. In spite of everything – attractiveness, sorrow, and crime – the attachment to Jesus prevails." For Giussani, morality is a loving adherence that generates an authentic friendship with Jesus and with God.

This premise of a personal nature allows me to touch upon the total horizon of Fr. Giussani's proposal. At this time, it may be useful to start from his charism. I will limit myself to elucidating on what in my judgement are its constituent elements. Since 1954, when Giussani began his educational action with students, his starting point was the proposal of a personal encounter with Christ. Several times I heard him repeat that his intention from the beginning was to make the teaching of the Venegono School existential.

Concerned about the serious ignorance among young people about Christianity and the Church, he perceived that people spoke of God in an absolutely abstract way because they did not "see" the living God who is Jesus. Those of us of the first generations were thus led to make this relationship explicit, even publicly. Not only through liturgical action and prayer but also, and perhaps above all, in the web of daily relationships with all our companions and with those we met.

Paradoxically, this missionary impetus was not immediately received well, even in the Catholic world. Numerous people, in fact, even priests, accused us of "drawing away" people from the oratory, or there were those who disapproved of the choice of a mixed education – proposed to boys and girls together. Above all, they claimed that making this personal and communal relationship with Jesus explicit in a public manner would prevent those who were not believers from approaching the faith. It was necessary to first create a neutral space by delving into purely human problems and only then begin talking about Jesus.

This first aspect of Giussani's charism can shed light on the ordeal Christians are going through in our country today. Particularly since the end of World War II, the waning awareness of the nature of the Christian fact has generated a rupture between faith in Jesus as the meaning of life and concrete daily actions. It can be said, in a nutshell, that what has been lost is a sense of how the “for whom” I live, love, work, rest contribute to the building of the Christian community and civil society.

The other factor of Giussani's charism, which is intertwined with the first, consists in the explicitly evangelical consciousness that the relationship with Christ, the living God, demands belonging to the community in which one recognizes and practices the very fact of having the lovable person of Jesus in common.

This is the meaning of the Christian community in which one experiences belonging to Christ as an indispensable condition for belonging to one another. If this fact is lost, Christ escapes contemporary experience and is relegated to the past.
Thus, as Lessing said, a terrible rupture, which from the chronological becomes substantial, is established between Him and us. Instead, an event – especially that of the living God – can be communicated only through another event. If the Church loses this elementary fact and is reduced to a set of initiatives, structures, and projects, the Christian and the whole community lose the meaning of who we live for. And, beyond all good will, the Christian community runs the risk of boring people instead of attracting them.

The third link in Giussani's original charism is the awareness that the encounter with Christ, made possible by the Christian community, is by its very nature intended for all people: it is missionary. It suffices to recall the importance given to presence of the charism in different spheres. It is articulated in the dimensions of charity, culture and mission. Every gesture of the Christian must carry within itself the echo of these factors. If one looks without prejudice but with simplicity of heart at the nature of this charism, one can understand why the Spirit was able to generate, starting with the servant of God Fr. Luigi Giussani, the reality of Communion and Liberation. In its various expressions, it is now present in a large number of dioceses around the world and, beyond all its inevitable limitations, continues to awaken the attraction for Jesus and the Church in many men and women of all ages, and from different cultures.