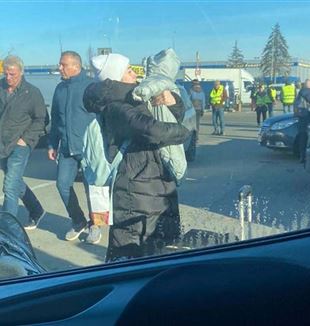 A couple of weeks ago, a friend had told me that they had gone to the Ukrainian border to pick up some refugees. I was struck by the fact that for him the war and its consequences had faces that he spoke of with tenderness and emotion. For me, after an initial moment in which this war had seemed so close and scandalous, lately it was once again become just a news headline I read about in the morning. Realizing this hurt me and a desire arose in me to be able to look at this circumstance as he looked at it. I wanted to go too. A few days later, at the graduation of some friends, one of them introduced me to a long-time friend of his, not from the movement, who said, "Would you like to come to Poland with us tomorrow?" Without thinking too much about it, I said yes.

The expedition was organized by an association called Refugees Welcome. The program consists of boxing up food, medicine, clothes and other useful things, going to the border between Poland and Ukraine, cooking for those who arrive at the refugee camp, and then taking those who need it back to Italy. I immediately realized that the people we would be going with were very different from me and my experience; they are part of a social center. This struck me for two reasons. The first is that they had set up something impressive; we would have left with ten cars and a bus, transporting fifty people to Italy, not including the amount of goods they had collected. The second thing is that I saw that their heart is made like mine. I was reminded of Giussani's words in The Meaning of Charitable Work: "When we see others who are worse off than we are, we desire to help them with something of ours. This need is so original, so natural, that it is within us before we are conscious of it. We call it the law of existence.”

We organized the packages, loaded them and, after a night's journey, arrived at the refugee camp, first emptying the cars in the warehouse and helping to fill a van belonging to a Ukrainian who was leaving for Odessa. The refugee camp is located in an old shopping center. The cars of hundreds of volunteers from all over the world stop in the parking lot, and nearby there are gazebos where food is prepared. We Italians obviously cooked pasta with tomato sauce, while the Germans across the street boiled sausages. Inside there were beds for the refugees. From dawn to late evening, buses unload people arriving from the station. Once the refugees arrive, they can decide whether to stay at the camp (hoping to return to Ukraine as soon as possible) or leave for other European countries. The Italian pavilion, managed by the Protezione Civile, is the largest not because most Ukrainians aim for our country, but because our Protezione Civile is entrusted with all those who want to return home. And they are the overwhelming majority. The camp was full of misery but also great dignity. Precisely because of their dignity, many find it difficult to get help at first. When I saw some of the mothers crying, I sensed that they were thinking of their husbands or sons who stayed behind to fight, of their homes, and I was reminded of when Giussani speaks of evil as something foreign to man in the School of Community. Faced with their pain, I thought of how detached those who are carrying on the war are from the real human. 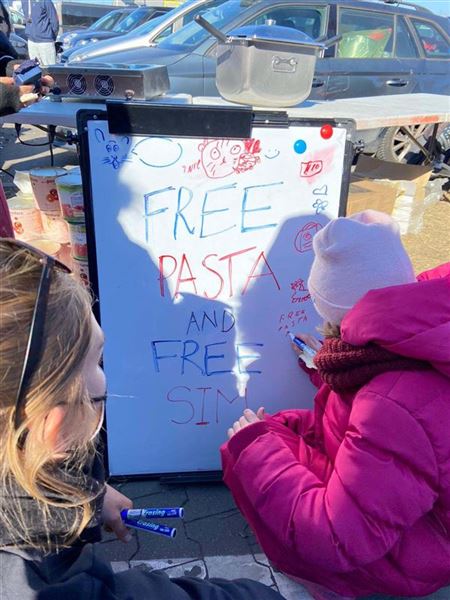 I was immediately struck by the signs of a humanity that does not give in. Like the little girl who started coloring on our blackboard in front of the stove where we were cooking pasta. In the evenings we played the guitar and sung, and some mothers came to watch and be with us. At night it reached -10°; we slept with the car on and the heating on full blast, both to avoid waking up frozen and for fear that the petrol might freeze. The next day, we woke up to the sound of a mother who had just got off the bus, cradling her baby. I thought to myself: what else is there to look forward to during this day that is beginning? We spent the morning playing with the kids in the field, unloading trucks and helping. After lunch, we went to the train station, with a sign in Cyrillic saying "Krakow-Vienna-Milan". Two moms with three and two children approached us. One of them spoke just enough Italian to make herself understood. She asked us if we were going to Milan, and told us that she had previously worked in Omegna.

Apart from her, Mira, no one spoke English or Italian. We set off again. The kids were quite carefree, although you could see sadness in the eyes of the older children. I was struck by Mira's older son. He is 17 years old and narrowly escaped having to stay behind carrying rifles. I thought of my little brother. He always stayed close to his mother. We did not ask them about their husbands, we know that they stayed in Ukraine. Fortunately, google translate allowed us to communicate a bit. The journey proceeded quietly. They made us listen to their favourite Ukrainian music until we reached a motorway service station on the border with the Czech Republic. We stopped there thinking there was a McDonald's. The temperature hit -6 so we proposed to the mothers to eat something inside. They showed us some sandwiches and told us that they would eat outside. We realized that it was a financial problem and so we told them that the food would be on us. They accepted reluctantly, but to the great joy of their children.

Read also - Poland: "How to have God in our home"

When we got back on the road, the mothers continued to show a certain mistrust. During the night, while their children slept, they stayed awake and watched us drive. An hour before dawn, we arrived in Tarvisio and from that moment on, Mira began to show a more relaxed attitude. We stopped for breakfast and she offered us the sandwiches they were going to eat the night before and some coconut sweets, while the other mom slept in the car.
Exhausted from so many hours of driving, I too fell asleep. The window was hard and cold. Mira, being a good mom, noticed, touched my shoulder and handed me a soft toy, making me understand that I was to rest my head on it. I fell asleep and woke up in Crema, where we dropped off the first family with their grandmother, who hugged her grandchildren in tears. At ten o'clock we arrived at Bovisa station, where we had an appointment with the Italian family that was to host Mira and her children. After taking a photo together, we said goodbye and Mira gave me the soft toy I had slept on.

The next day, we woke up to a message from one of Mira's daughters: "Thank you, you are well made." Those words have stuck with me. I do not know what she meant to translate from her language, but it hit me - yes, we are well made. It amazes me once again to see how the education I have received marks me deeply. I went there convinced that I was bringing them something, but instead I returned with a greater awareness that our heart is made by Another, and it is well made.