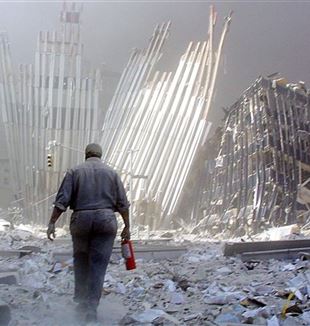 Early in the morning of Tuesday 11 September 2001, a group of Islamic extremists hijacked several airplanes in flight over the United States. They crashed two of them into the Twin Towers, the iconic skyscrapers of New York City’s financial district, destroying them and the surrounding buildings and killing nearly three thousand people. More people were killed when a third plane crashed into the Pentagon building in Washington, D.C., and when a fourth went down in Pennsylvania. The attack would later be traced to al-Qaida, the fundamentalist Islamic movement founded by Osama Bin Laden.

As soon as he heard the news (it was early afternoon in Milan, which is six hours ahead of America’s eastern time zone, which includes New York City) Giussani called Jonathan Fields, leader of the CL community in New York. The first thing he said was to pray to Saint Joseph for the universal Church and for the terrible tragedy.
Fields immediately took notes on Giussani’s comments and sent them out immediately to the members of the movement spread throughout America. The notes amount to sentence fragments and hinted thoughts that, nevertheless, reveal what it was that had driven Giussani to call right away: “We must remain steadfast in our judgement to compare everything with what has happened to us, in this tremendous and grave moment… We must repeat this judgement to ourselves first of all. This moment is at least as serious as the destruction of Jerusalem. It is entirely within God’s Mystery… Everything is a sign… Let us pray to Our Lady… The ultimate definition of reality is that it is positive, and God’s mercy is the greatest word. This is certain; we must remain steadfast in hope. Thank you to everyone, one by one, for being there.” Fields forwarded the transcript of the call, adding, “Please make every effort to get together for Mass or a Rosary.”

Pope John Paul II addressed the American tragedy with the first words he said at his general audience the next day, September 12: “Yesterday was a dark day in the history of humanity, a terrible affront to human dignity. […] The human heart has depths from which schemes of unheard-of ferocity sometimes emerge, capable of destroying in a moment the normal daily life of a people. But faith comes to our aid at these times when words seem to fail. Christ’s word is the only one that can give a response to the questions which trouble our spirit. Even if the forces of darkness appear to prevail. Those who believe in God know that evil and death do not have the final say.”
Giussani sent a telegram to U.S President George W. Bush, writing that all the members of the Catholic movement Communion and Liberation “are close to you at this difficult moment for the entire Nation and, therefore, for all humankind due to the tragic events in New York and Washington, D.C., [which are] a terrible affront to human dignity.”
In his message to Bush, Giussani quoted the pope and said he was praying “for you and for your people, that you may attain the peaceful justice you long for and which the entire world needs, given the historic responsibility that the United States of America have towards everyone.” 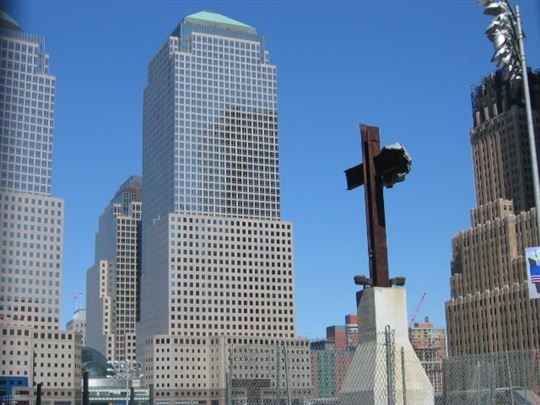 The cover of the September edition of Traces was dedicated to the tragedy and featured a quote from Giussani: “God save the world. If we put God in front of all the sins of the world, it seems obvious to say: ‘Who can survive? No one can be saved.’ But God dies for a world like this, becoming a man and dying for humankind. The ultimate meaning of the Mystery is mercy, a positivity that conquers presumption and desperation.”
The issue ran an editorial that quoted Giussani’s initial reflections, which he expressed in a conversation with some CL leaders: “The terrorist acts perpetrated on the United States represent, first of all, a horrendous surprise. The symbols of power in the world were demolished, bringing thousands of dead down with them. It is as though the powers, the greatest display of the human ability to construct, were impotent in the face of another human capacity, the ability to destroy, to annihilate the efforts of civilization. Thus the people of the western world, taken up with other matters and forgetful of their fragility, of the evil and sin they bear within them, stare aghast at the television images of the science-fiction realization of the evil intent of ‘others.’ In effect, everything human is at grave risk, a risk that no missile defense shield can eliminate, not because of technical reasons, but because of the poison – Christians call it ‘original sin’ – the envy that man carries within, against good and against himself.”

“It is difficult,” the article went on, “to fight those who are not afraid to die, those who even make death and self-destruction their absurd strategy for self-affirmation, […] who, although alive, deliberately walk like dead men, having consumed the savor of existence and freedom in their total alienation […]. Someone like this, whether devoted to his god, or worse, to other men, does not exist; he is nothing stuffed with explosives who reduced to nothing whatever he meets. The shock and pain of what had happened pressed everyone to “seek justice with all the means available to man, yet not according to the presumptuousness of man, but according to the will of God, of that God invoked by the pope, followed by the multitude on their knees in prayer.”
Giussani drew a parallel between the suffering of the world and his personal circumstances. During a physical therapy sessions with Jone that tragic September he reflected on his age and infirmity: “God allows suffering in order for life to be more itself. Life without suffering shrivels and closes itself off.” 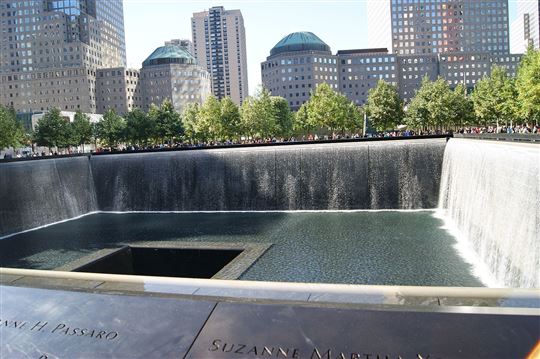 This idea made it into the October and November covers of Traces, which were inspired directly by Giussani. The October issue, with the headline “Cross and Mercy,” carried a photo of the 2001 Way of the Cross over Brooklyn Bridge with the Twin Towers still standing in the background. Superimposed over the photo, a quote from Giussani read, “Around this ‘wood’ coagulate the evil of man who fails the call of the Infinite and the disasters caused by this crime, so that the death of the God-Man is the sign and symbol of all these disasters. Because the world is in evil. The world lies in the Evil One. And at the same time, here, too, is met the irresistible power of God, because just that supreme disaster and that evil become the instrument for his conquest and redemption.” The November issue of Traces displayed a photomontage of the Ground Zero blast site and a picture of John Paul II embracing the cross, beneath the title “A Death Wish. The Inexorable Positivity of Reality.” Below the title were these words from Giussani: “If others go so far as terrorism, we have to go so far as a conscience that bears the ultimate consequences of the life that the Lord has created. This is the contribution that Christians bring to the so often incomprehensible mess of the world: the affirmation of an inexorable positivity of reality which makes it possible to keep starting over in life.”

The closing words at CL’s beginning day in Milan on 22 September 2001, despite their concern for what was happening in the world, were full of a certainty that Giussani drew from a passage from the Prophet Jeremiah: “You are in our midst, Lord, your name we bear: do not forsake us!” This, he explained, was the outcome, “the most wonderful result of an awareness that is reawakened and always re-launched, by the grace of god, throughout all our life.”