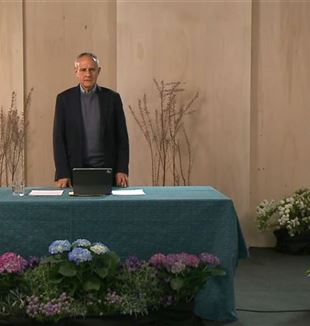 “Even worse than this crisis is the tragedy of squandering it by closing in on ourselves.” These words of Pope Francis impel us to become more conscious of what has happened to us, of what we have experienced in this last year or so.

1. The impact with reality

From the very beginning, we have faced this challenge, which has allowed no one to remain indifferent, with a working hypothesis expressed in a line by Fr. Giussani: “If an individual were to barely live the impact with reality, because, for example, he had not had to struggle, he would scarcely possess a sense of his own consciousness, would be less aware of his reason’s energy and vibration.” Thus, following Giussani, we are invited to “live always the real intensely,” without negating or precluding anything. In fact, it is one thing to be unable to ignore or avoid the impact with the circumstance, but it is entirely another thing to live it, embracing the provocation it bears. With this hypothesis to verify, even such a dangerous situation as that generated by Covid paradoxically could became an opportunity to increase our self-awareness, so often obscured, and to perceive more powerfully the energy and vibration of our reason; in other words, it could become an opportunity for the reawakening of the human, as consciousness, reason and affection.

What has happened? After more than a year, what have we seen happen in and around us? Many people have noted two phases, two faces of our experience in front of the pandemic, corresponding to the two waves of the spread of the virus. The second wave, as Antonio Scurati observed, “caught us not less unprepared and not less immature than the first wave, but more tired, demoralized, quarrelsome, and petty,” as if we had failed to learn from what happened in the first phase and grow, failed to increase our awareness and become more substantial ourselves. This can be sensed from what emerged during the second wave: a greater sense of fragility, the spread of uncertainty and anxiety, signs that indicate, as noted by Massimo Recalcati, that “the true trauma is not in the past but in the future.” The second wave, “destroying the illusion of the renewal of life that we all had believed in, […] extended the horizon of the nightmare. The second time of the trauma is more traumatic than the first because it shows that the evil was not spent, but is still alive among us. The hopes nourished by the summer have been dashed. Today this disappointment is the prevalent sentiment.” [...]