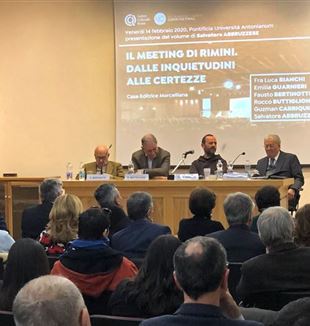 It was an unexpected fortieth birthday gift. Il Meeting di Rimini. Dalle inquietudini alle certezze (The Rimini Meeting. From apprehension to certainty), published by Morcelliana, is 512 pages long, and the result of years of research and analysis of hundreds of documents and testimonies. Thanks to the Cultural Center of Rome and the Italian Association of Cultural Centers, on Friday February 14, at the Pontifical University Antonianum, the book by Salvatore Abbruzzese, sociologist at the University of Trento, was presented by Guzman Carriquiry, Vice-President emeritus of the Pontifical Commission for Latin America, philosopher Rocco Buttiglione and Fausto Bertinotti, president of the foundation “Cercare Ancora”. There as chairmen were Brother Luca Bianchi, Dean of the Franciscan Institute of Spirituality at the University, and Rector Augustín Hernández Vidales.

"The title ‘from apprehension to certainty’ does not identify a before and after," began Emilia Guarnieri, President of the Meeting Foundation, in her inaugural greeting: "Each moment in these forty years has vibrated with apprehension and certainty. This apprehension has never abandoned us in seeking, with sincerity and simplicity, every fragment of humanity, every experience, every attempt with which to enter into dialogue and build together". And as for the certainty that sustains the Meeting, "it is trust in reality, esteem for what happens. At its origin, as Abbruzzese highlights, is the certainty that the truth exists, a certainty that the Christian experience has made clear and reasonable, and which the history of the Meeting has made us experience". 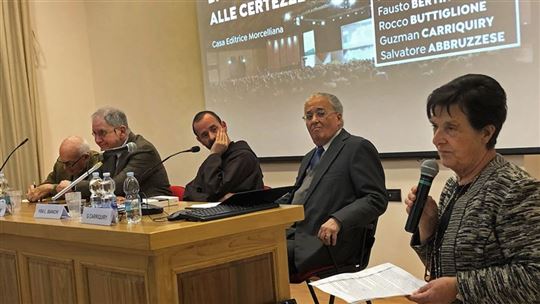 "The Meeting deserved such research," Carriquiry added: "This is the first work to frame this extraordinary event in the context of the movement of CL, the Church, our country and the great cultural transformations of our time.” Carriquiry speaks from past experience: he has been at the Meeting since 1981 and now participates with his whole family, daughters and grandchildren. And yet, there is always the amazement of an event that "attracts many people even outside the movement, which does not aim at identity ostentation and is not trivially a sounding board for CL, but has its roots in the way in which it places its charism in front of reality, its ability to "sift through" what is encountered in order to enhance every little positive aspect". This DNA can be seen, for example, through the volunteers of the event: "Since the 1980s, it was clear to me that there was something here that was different from the militantism that I had known in my youth. I understood it better when I read Fr. Giussani’s words about the use of free time as an opportunity for the growth of one's humanity". As for the "all-round dialogue", which makes the Rimini Meeting distinctive, it "pre-empted Pope Francis’s approach: not ideas shouted forth, but diligent and intelligent listening".

Bertinotti, in his testimony, as he himself defined it, identified two fundamental connotations of the Meeting: being "a people under construction" and "long duration". "In a time of desertification of the human being we have the great need to be a people," said the former speaker of the Chamber of Deputies, while the long duration of the Meeting is an antidote "to the forgetfulness of the past and the flaking of the future which our age is suffering from.” Only that which lasts can, as Camus said, “resist the air of time", particularly when this air becomes difficult to breathe. But how do you get back on track in a time that loses all evidence? Bertinotti quotes Giussani, Pasolini, and especially Gramsci to remind us that "the moment when everything seems lost, that is the moment when you have to start over" and, he continues, the Meeting is precisely this ability to start over, to build a common house, a house that is made from used materials, from the wisdom of the builders, but, first and foremost, from the people who live there. This is what impressed him in his encounter with the Meeting: "The physical knowledge of its people, that capacity for brotherhood that did not make me feel like a stranger”. In his very dense speech, Bertinotti placed the Meeting at the height of the crisis of the twentieth century, a fascinating and terrible century, an impossible dream transformed into a real nightmare, which became the era of a new world of disorder, in which politics was sucked into the economy, the world war continued in pieces, individualism triumphed... Yet, even "in this world without salvation you know how to extract elements that generate hope".

For Buttiglione, Abbruzzese's book is above all "a masterpiece of method, in its ability to participate fully in the Meeting-event, but also in its understanding of how to look at it from the outside in order to grasp its objective elements.” It is necessary to go back to Fr. Giussani in the early days of Student Youth to understand the method of Rimini, above all to the "raggio", the encounter in which one started from their concrete experience of people and was always brought back to experience: "The contributions of each person were perceived as complementary, not alternative, and the richness that emerged was seen as the fruit of the One who comes to meet us, Jesus Christ". In this way, the truth is not perceived as an exact idea or theory but, quoting Claudio Chieffo, "in the face that you have", that is, in the faces of people, in people who come into our lives by removing us from alienation. This approach suggests a very powerful method, which does not focus on the error of others, but the valuing their experience: "Valuing the experience also burns the error. Novelty always emerges by starting for experience, and errors are corrected. This is the greatness of the extraordinary event of the Meeting”.

Read also - Brazil: "Jesus, the most human man who ever lived"

Finally, the author took to the floor, for whom having dedicated 500 pages to the Meeting was just "having given a signal, aware that we are facing something much bigger. We must keep looking". Abbruzzese brings everything back to anthropology, to the question of the meaning of life, a starting point to face reality without censorship, "not limiting ourselves to the cultivation of our small microcosm". Hence the ability to generate a life, hence the duration over time: "How did the Meeting hold up after its first sparkling years? Why did it not collapse ten, twelve years after its birth? The answer lies in the person, it lies in the fact that if the question about our existence is serious, everything we live is important. And this creates what I call in the book ‘a moral environment’". An environment that explains how three thousand people "have chosen, for forty years, to dedicate a week of their time to work in the car-park, wash dishes or chauffeur the speakers, even paying for accommodation... It is an anthropology that is not theorized but that is in progress, which infects everyone, even those who come to the Meeting as guests. Because, to return to Bertinotti, "here, at the Meeting, there is what constitutes a people, there is a goal and, therefore, also a path".#Meeting19