"Enemy Solitude." This was the title of the conference that took place on Friday 15 and Saturday 16 November in Florence. The conference was organized by the Italian Association of Psychogeriatrics, chaired by Marco Trabucchi, the Montedomini Foundation, led by Luigi Paccosi, and the international Long Term Care Alliance network, with its managers Andrea Ungar and Ilan Gonen. But the immense photograph of Alda Merini in the background, with her eyes as lit as the cigarette between her fingers, began to open the way to certain doubts and to possible hope.

The initiative was born as part of the second National Day against Solitude, to raise awareness of a problem that closely affects many elderly people. The organiser of the conference, Professor Ilan Gonen, had the idea of inviting Fr. Julián Carrón, after having met some friends of CL through the Aldo Moro Italian School in Bucharest, where Tina Savoi, a Memores Domini, has been headmistress for 11 years. The conference took place in Florence due to the commitment of several institutions: starting with its mayor, Dario Nardella, who commissioned his advisor, Andrea Vannucci, the “delegation of the fight against solitude". And the Montedomini Foundation - heir to the historic Casa Pia- which, alongside the "Solimai" project, has, for three years, created a network of volunteers who go to the homes of the elderly to keep them company. 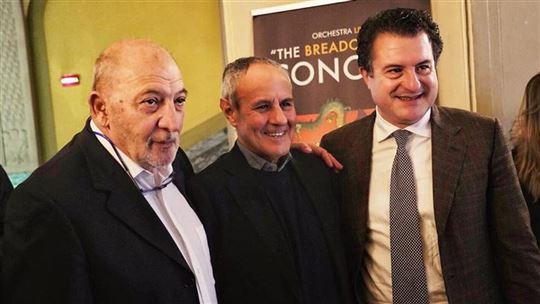 It was down to Fr. Julián Carrón, who was entrusted with the theme "Faith and Solitude", to open the horizon on this last "elementary experience of man" as sung by Giacomo Leopardi in his Nocturnal Singing of a Wandering Shepherd of Asia and as described by Emily Dickinson: "There is a solitude of space, a solitude of sea, a solitude of death, but these society shall be compared with that profounder site, that polar privacy, a soul admitted to itself, finite infinity". Because, added Fr. Carrón, "no solitude is comparable to that of a soul in the presence of itself". As Fr. Giussani stressed, "the sense of impotence accompanies every serious experience of humanity", therefore "the more aware man is of the immense dimension of his impotence, the more he realizes that that solitude cannot find an answer in us or in others".

On the other hand, a different perception of lacking is not lacking in human experience, which revels itself as a “marvellous achievement”, as Gaber sang: Loneliness is not madness, it is essential to be in good company". It has nothing to do, for example, with the anguish that pervades the two orphans of Pascoli’s the homonymous poem, at night. "A tremendous conquest or a marvellous condemnation?", Carrón asked himself, referring to how Etty Hillesum, the young Jewish woman who died in Auschwitz. She also spoke of it: "I know two forms of loneliness: one makes me feel terribly unhappy, lost and without direction; the other makes me strong and happy". The answer, and the difference, is not to be alone or not, but to live a life full of meaning.

A question of attitude, as the words of the psychiatrist Eugenio Borgna, cited by Carrón, recall: "Loneliness and isolation are two radically different ways of living, even if they are often identified. To be alone does not mean to feel alone, but to be temporarily separated from the world of people and things, from the daily occupations, to enter into one’s inner self or imagination, without losing the desire or nostalgia for the relationship with others, with loved ones, with the tasks that life has entrusted to us. We are isolated, however, when we close ourselves because others reject us or when, more often, we follow the wake of our own indifference, of a gloomy selfishness that is the effect of an arid and dried up heart. Therefore, it is not a condemnation, because there is no lack of testimonies of how it is possible to live any human situation positively. Journalist Marina Corradi, quoted by Carrón, talks about her “crack”, which at a certain point became "severe depression": "I read Mounier: “God passes through wounds", he wrote. It made me think that perhaps my crack, like a hole in a waterproof wall, was a necessary laceration? If I did not exist, who am physically healthy, not poor, lucky, I wouldn't need anything. That broken wall, that flaw, is a salvation. A torrent of grace, uncontrollable, can enter through it and fertilize the dry and hard land.”

“This is the fight in any circumstance", explained Carrón: "But for what reason do we want rid of it? Only love for ourselves, because, in fact, even the deepest pain can lead us to discover completely unknown horizons. But, to open ourselves up to this possibility we must look at it with that openness that only man can have". Provided we do not fall into that
current emptiness of meaning, described by psychoanalyst Umberto Galimberti, which does not affect "a particular age, because you can already live old age at the age of twenty," says Carrón.

In order for loneliness to be "experienced as a positive factor of living", it is necessary to go through it. In order for it to become "the place where to discover the original companionship", it is necessary "not to block the need for meaning that dwells in the human ". Starting from the fact that we do not make ourselves, as as Etty Hillesum again testifies: "Inside me there is a very deep source. And in that source there is God. Sometimes I can reach it, more often it is covered with stones and sand: then God is buried. Then we must unearth it again". "Life is, therefore, expressed, above all, as awareness of the relationship with the one who makes it", continued Carrón, citing Fr. Giussani’s Religious Sense: "Only in this way can solitude be overcome, in the discovery that we are like love that continually gives itself, that makes me, because there is an Other who wants me to be there. Companionship is in the "I" because we do nothing alone, because we are generated by Him in every moment. Every human friendship, every attempt to respond to this loneliness is a reverberation of the original structure of being, that is, of this original companionship that Another makes us by putting us into the world".

It is evident in the relationship of a child with his mother, who chases away their fear of a dark room, which is an example set by Giussani. And it is also so in the irreducibility of the need to be loved, invoked also by an avid unbeliever like French novelist Michel Houellebecq in a public letter to Bernard-Henri Lévy. A desire that persists and for which, as Montale wrote, "the unexpected is the only hope". Not foolishness, because it has happened: solitude has been overcome by the presence of God made man, of the Incarnate Word, whereby "everything acquires richness and beauty".

A Presence "that offers itself to become true companionship," says Carrón, as "the greatest challenge to human reason and freedom. God was moved by the nothingness we are, by the loneliness that we do not know how to overcome with our efforts, and for this he sends his Son into the world”. "He did not come to destroy suffering or loneliness, but to suffer with us, to accompany us in living, to become a companion in any situation in which we find ourselves.” In this sense, Fr. Julián concluded, "faith makes a decisive contribution to the solitude of each us or to the situation of the elderly. For a man who is aware of himself, enemy loneliness can then become a friend in his journey, a companion, because it is full of uninterrupted dialogue with the Mystery that does all things".