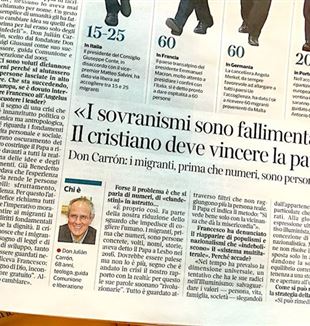 “I remember how struck I was by the story of a Pakistani immigrant who arrived, exhausted and hungry, at an Italian center for migrants. A volunteer called him by name and asked whether he wanted his pasta with red sauce or without, and whether he wanted fish or meat. The man burst into tears, because nobody had ever called him by his name. This simple gesture of humanity changed his idea about people he had always considered only as ‘infidels.’” Fr. Julián Carrón, chosen by CL founder Fr. Luigi Giussani to be his successor, has been the leader of Communion of Liberation since 2005.

It took Europe 19 days to come to a decision about who would host the 49 migrants rescued off the Libyan coast. The boat was then refused permission to dock. What is happening in Europe, if it took Pope Francis’s strong words at the Angelus to shake its leaders into action?
“It is the sign of a crisis that is not principally political or economic, but anthropological, because it concerns the foundations of personal and social life. In response to an odd darkening of the mind, it was necessary for the Pope to speak in order to make people see reality again, rather than just their ideas and party lines. Years ago, Benedict XVI pointed out that the experience of migration makes people vulnerable to exploitation, abuse, and violence. Therefore the current Pope is calling everyone to respect the moral imperatives of guaranteeing the protection of migrants’ fundamental rights and respecting their dignity. Christians acknowledge that migrants need the help of laws and development programs, but equally they need ‘to be looked in the eyes,’ as Francis said. ‘They need God, encountered in gratuitous love.’ When that happens, everything can change.”

Maybe the problem is that people talk about numbers and illegal immigrants in the abstract…
“That’s exactly right. It is part of the way we have reduced the scope of our gaze, and become unable to grasp the human. As the Pope said in Lesbos in 2016, migrants are not just numbers; they are concrete people, faces, names, and stories. This should be clear, but it is no longer so, and this is a sign that our relationship with reality is in crisis. Thus the Pope’s words sound ‘revolutionary.’ Everything is viewed through filters that no longer allow us to see the real person. The Pope has indicated the method: ‘You see well only with the nearness given by mercy.’”

Francis denounced the re-emergence of populism and nationalism, which “weaken” the “multilateral system.” Why is this happening?
“Over time, the universal dimension has come to prevail. The attempt to achieve this, rooted in the Enlightenment, seeks to protect the values of the person, life, the family, and society, but detaches them from their belonging to the particular story that generated them. So now we see people opposing globalism, the ultimate expression of the Enlightenment attempt, with a conception of nationalistic belonging. But this reaction does not solve the problem; it only shifts it forward, delaying the solution, which instead would be a correct balance between belonging to a particular story and openness to the universal.”

How can this strategy of fear be countered?
“It can be rectified only if we find a true answer to our fear. Fear is not overcome by violence, closing off, or walls, which are all expressions of defeat. Fear is only vanquished by a presence. A child’s fear of the dark is overcome by the unique presence of his mother. Each of us must discover in our life the presences that respond to our fears.”

The sovereignist challenge, ranging from the proposals of Bannon to those of Salvini, also espouses “Christian values.” What can the Church do?
“She is called to her one mission. She holds the ‘secret’ of the victory over fear, the one Presence who overcomes it without any need for violence. This is a powerful opportunity for the Church to rediscover her task: to announce this Presence, to bear witness to It. Only by allowing herself to be filled with the presence of Christ can she testify to everyone about a modality of overcoming fear that is suitable to today’s challenges. This is the contribution we Christians are called to give: to generate women and men who are not dominated by fear, but can create places that welcome and integrate those who are different from us. From the very beginning, pure reaction as a way out has proven to be a failure, even if in the short term it may seem effective. A historical perspective is missing. We have already seen too many situations in which a mentality became dominant, but then could not stand up to the impact of time. We will wait and see how long this one lasts.”

What would you say to the faithful who are seduced by sovereignism?
“They should look at themselves and see whether, when they go to bed and when they get up in the morning, it responds to their hopes and expectations. In this dramatic moment, each of us, and thus our families, our relationships, our needy sisters and brothers, our society, is in play. It would be a pity to waste this opportunity.”