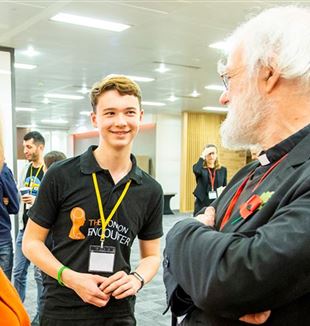 Exactly one hundred year ago, at the end of the Great War, a young Welsh artist, David Jones, returned from the Western Front, after three years in the trenches. He brought with him the baggage of traumatic memories, but also sketches and drawings, and above all the idea of a poem, "In Parenthesis," which would take form in the following years. Considered by Auden as one of the most important poems of the 20th century, "In Parenthesis" is a heartbreaking hymn to friendship, to man’s dignity and freedom, and to the beauty of art as the expression of these things. David Jones would later convert to Catholicism, in what for him was a natural step, following on his experience of art as a “sacrament.”

In those same years, a family of Russian refugees, after a long wandering, arrived in Paris: it was the beginning of an exile imposed by the Communist regime on millions of people, millions of seeds thrown by God among the peripheries of European cities. One of these, Anthony Bloom, would bear much fruit. As a doctor, a priest, and later the heart of the Orthodox community in Great Britain, Father Anthony, known also as Metropolitan Antonij of Sourozh, was also a familiar voice in many homes, thanks to his broadcasts on the BBC. Among the many young people whom Antonij inspired, there is Roman Williams, the poet and theologian, Archbishop of Canterbury from 2003 to 2013, and a faithful companion of the London Encounter, which gathered this year for its fifth edition. 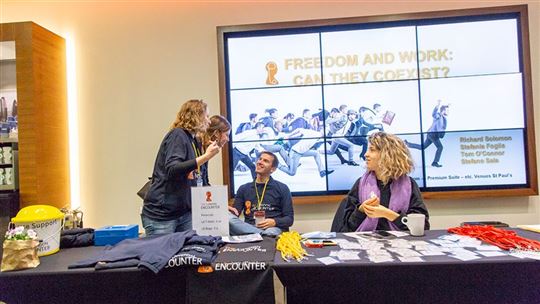 David Jones and Father Anthony, on November 3, were the protagonists of two exhibits at the Encounter, which this year had the title “The Human Being: A Paradox of Freedom.” As Williams observed at the meeting’s opening, David and Anthony had a lot in common: called to live in extreme situations of deprivation and exile, both testified with their life that freedom is possible in any circumstance.

On stage together with Williams, there were George Corbett, a scholar of Dante and professor at the University of St. Andrews in Scotland; Aleksandr Filonenko, Orthodox theologian at the National Karazin University in Ukraine; and Heather Richardson, director of the St. Christopher’s Hospice in London, a center for terminal patients, and the prophetic work of the Anglican nurse Cicely Saunders.

Corbett began a dialogue that would continue the whole day, outside and inside the meeting hall: he underlined that freedom does not consist solely in adhering to the law of God, does not reduce simply to the choice between good and evil. The freedom that God gave men, and in which He delights, has a much greater breadth, and embraces, rather than contradicts, the idea of freedom as “freedom of choice”, which is so widespread in contemporary society. Even for Christianity, freedom has to do with the individual, with his or her personal choices and preferences. 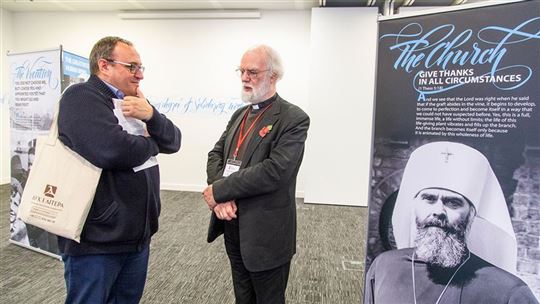 Filonenko took a further step, starting from the story of the Russian refuges in England after the War: fleeing from a regime that had eliminated choices and options, these Russian emigrants came in contact with the attraction of liberal society, often with alienating consequences. Only the relationship with Christ, witnessed by men like Metropolitan Antonij, could give their freedom meaning and reality.

Heather Richardson followed, and starting from her experience at St. Christopher’s, she shared an array of stories of men and women, of their choices in the days leading up to the end of their lives. The drama of freedom, she explained, emerges in particular in the moment of death, revealing itself in the freedom to give thanks and to ask for forgiveness. 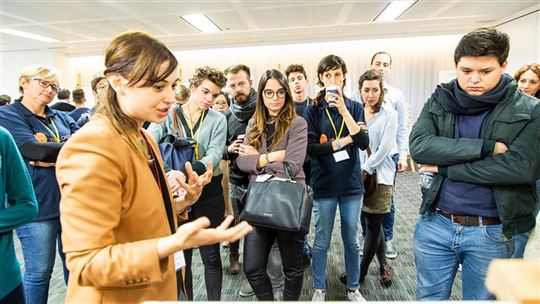 The reality of death, commented Rowan Williams, purifies the drama of freedom: to be free does not mean to pull back from the circumstances or abandon ourselves to ideas or images. Freedom is the discipline of participating in reality, in the present moment. Filonenko offered the image of dogs on the hunt, who are freer than us, vigilant and happy in pursuit of their prey.

Two images concluded the meeting. In paradise, God will not scold us for not being the next Mother Teresa of Calcutta, but for not having experienced the full freedom of becoming ourselves. The second image, an Indian story, tells of a man who is clinging to a branch, on the edge of a cliff, being chased by a tiger, who can still affirm all his dignity by recognizing the beauty of a flower among the rocks.

Beauty, together with death and love, is in fact the key word that emerges at the heart of the mystery of freedom. Someone asked how it is possible to have this freedom about which the presenters spoke and to which they gave witness. The response of Filonenko was unexpected: the only hope is an experience of beauty, of whatever type, that can give us back that gratitude for the presence of reality, and then can reopen us to the relationship with Christ.

The dialogue continued into the afternoon, in the meeting that dealt with freedom in work. On the stage were Tom O’Connor, the general director of Providence Row, an association for homeless people in London, Stefano Sala, a businessman from Milan, and Richard Solomon, finance director for St. Mary’s University in London. 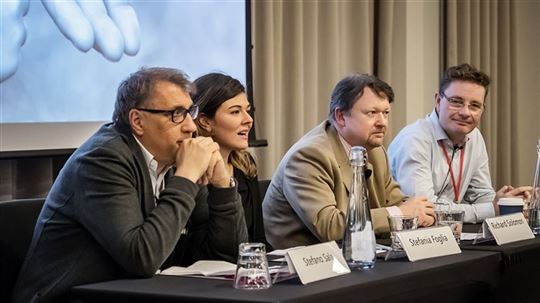 O’Connor made the link right away between the idea of freedom and that of happiness: only the full realization of our individuality in the work environment makes us free. And this happens only in the awareness of one’s own work as a collaboration with God’s creation. As Father Anthony said, in a phrase which was cited on a panel of his exhibit (financed by the Orthodox community of London), to be Christian means to be creative, that is, to participate in the divine creation with the particularity of our individual freedom. This can happen, though, only for the one who makes himself completely docile in the hands of God.

Sala, instead, underlined how freedom is possible only in the awareness of the ultimate aim: in a big business, even the humblest work has an enormous value and dignity, if one connects it back to the overall mission. This awareness is given, though, only within a companionship. Richard Solomon concluded the encounter with a somewhat different story of work: for him, work is the privileged place in which “God turns on the warning light that we are out of gas.” And it is not success, recognition, status, or money (all good things) that fills the tank: only a work sanctified in relationship with Christ can truly fill the heart, and reenkindle our freedom, as an unexpected gift. 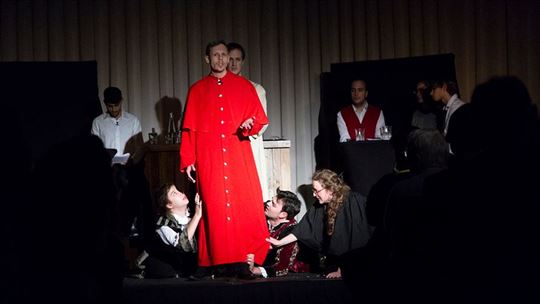 The London Encounter closed with a performance taken from The Brothers Karamazov by Dostoevsky. The cry of the old inquisitor, who dedicated his life to sparing man from the drama of freedom, sounded more like a prayer, than a rebellion. To the challenging words thrown out by the inquisitor, the facts, the faces, and the words we encountered throughout the day respond like echoes in a valley.

It is in fact an Encounter where everything mysteriously comes together, where a spark introduced in an encounter or in an exhibit comes alive in a conversation with a friend or a colleague; where people who were far from each other (re)encounter each other, and individuals with their stories of freedom, stories that are so different, discover friends and companions, often with unexpected coincidences and similarities. Rowan Williams synthesized all this with a joke: “It’s all been arranged upstairs.”