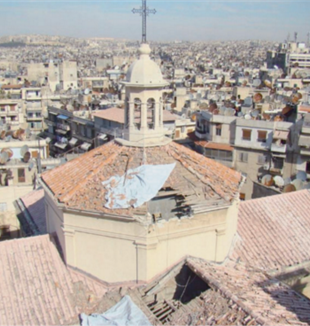 The door of the Latin church of Saint Francis in Aleppo was chosen as the Holy Door for the extraordinary Jubilee of Mercy; this fact filled our hearts with joy and gratitude. They made this decision only a few days after a bomb had been launched onto the Church’s dome, which then rolled down and exploded on the roof, afflicting considerable damages on the building and wounding several faithful who were praying during Sunday Mass.

Pope Francis doesn’t ever get tired of repeating that the Church’s nature is to be a door of entry so that the sinner may experience the embrace of the Father; the mercy that the Father offers to everybody. Today is a time of grace, it is the jubilee time when we celebrate the mystery of God’s mercy, of the return of the “prodigal son,” but it is also the time of conversion and of spiritual renewal for the “elder son”. This is a time when the doors of the churches are wide open for everybody, not only for the faithful, but also for those who are seeking the Mystery.

Since arriving here one year ago as responsible of the Latin community, I have understood that my service in Aleppo, a city tormented by the war, is a service to open doors, or rather to “open the door”—that of God’s Mercy—to all those who suffer and who live with us. This is possible only when one has a heart wounded by God’s Love, wide open and ready to welcome anybody. A heart ready to forgive and radiate that love which, as Pope Francis says, “premerea” us—anticipates us before being asked.

“Our Catholic community of the Latin Rite is the poorest Christian community in Aleppo. We do not own land to sustain us. We do not even have a bank account that could help us face urgent matters caused by the war, and thus I tell the families of the parish, “Regardless, we have plenty of our Father’s Mercy and Love and of the charity that we share.” In our Church we made an agreement as true Franciscan friars: not to keep anything, ever, but to empty our pockets even of the little that we collect, as the Poor Man of Assisi witnessed to us, in order to help the people that suffer. In our poverty we managed to provide more than one hundred water tanks to several families, trying to meet one of the most urgent needs. Lately there was the case of 450 Christian families who, in the past having obtained loans from banks to buy a new house, due to the crisis deriving from the war, were no longer able to pay their monthly installment. The banks have sued these families, putting them at risk of being thrown out of their houses. We contacted various leaders of the Christian communities in Aleppo, and several charitable institutions, warning them about the imminent danger. Helping pay 25% of these families’ debt and reducing their risk of being thrown out is our way to be an instrument of the Father’s mercy.

Lately, we were been able to deliver to several families (80% of whom live below the poverty line) a “coupon” for 200 gallons of diesel, the minimum necessary to heat their homes during winter. We are also helping them cover school and university expenses. Then there are the daily needs: food, clothing, electricity, doctor’s visits, and medicines. It seems like a dream, but thanks to Providence the dream becomes reality day by day. We are poor, but we are able to “become rich”, opening wide the doors of our heart.

Jesus, nailed to the cross and mocked until the last moment, didn’t allow hatred to prevail, but rather offered forgiveness to his executioners, giving witness to his overabundant mercy. Thus, it’s not so strange that the Church of St. Francis, struck and “crucified” by hatred through a bomb, and marked by devastation, opens one of its doors wide so that the Father’s mercy overflows on those who decide to pass through them. That door will be open for a whole year (and hopefully forever) to the Christians who wish to renew their life following Christ’s example ever more, but also to all those who, although still full of hatred—such as those who launched the bomb—are living a crisis of their humanity and looking for an escape route from the hell that has entered their hearts.

We transformed all the areas of our convent into a peaceful and loving oasis, where anybody may stay for as long as they need to meet God. A clear source of healing and mercy, a means to proclaim the new life brought about by Christ; this is our community.