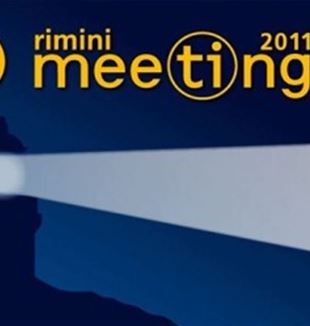 Need, desire, and the itinerary that makes all of existence become "an immense certainty": this will be the topic of the 2011 Rimini Meeting, the world's biggest summer cultural festival. Cardinal Jean-Louis Tauran, presenting this year's edition, indicated that itinerary for us, one that leads to the discovery that time "is not something that passes, but Someone who comes."

What is desire? Certainly it is very different from need. Desire is a tension of your whole being toward the thing you love–for example, a monk desires eternal life with a special ardor. Need, instead, is a tension toward a good that is necessary for our well-being, as with, for example, hunger. Once the hunger is satisfied, the need no longer exists. God created us with numerous needs. But, as creatures made in the image of God and called to participate in His life, we have something more. Even if all our needs are met, there will remain in us the desire for something greater: in the end, even if we do not know His name, we all desire God, who will always be the object of our desire, because we cannot obtain God. And the characteristic thing about the believer is that before we desire God, we must have the experience of being desired by Him.

KNOWN AND LOVED. Once the point is clear that we desire God and that, first of all, we are desired by Him, then certainty comes. We are not abandoned to fatum: we are known and acknowledged by a God who is Father and Son and Holy Spirit. For Plato, certainty was the fruit of knowledge. For Aristotle, all that is real is reasonable. And Hegel said the same thing. In reality, modern man seeks certainty in science or in reason. With the Bible, things go differently. The trust I place in God does not rest on some truths, sentiments, or experiences. It comes from a conviction that the ultimate truth of my life does not come from me, but from an Other who illuminates my life and gives it meaning. However, this does not mean that the believer is safe from doubt. Faith is certainty, but not safety. It is certainty because it is founded in He who gives it to me, Jesus Christ, who tells me who God is and who I am. Faith is also non-safety, because it remains linked to me and my weakness. Remember Peter, how he walks on the water as he watches Jesus, but as soon as his gaze shifts from Him, begins to sink. Faith will always entail a risk, the possibility of doubting. It is, at the same time, certainty and risk. Thinking of the great gatherings of Rimini, that for all of us are a witness of the vitality of the Holy Spirit, who is capable of transforming an assembly of thousands of people into a kind of Cenacle, it seems important to me to avoid any triumphalism, arrogance, or sense of self-sufficiency, because we all are made of good and evil, and are never sure of what we may be capable of doing or not doing tomorrow.

JUST A PERSON. But the great certainty that we have is not a philosophical option or a mystical experience, or the conclusion of a study on the religious dimension of man. No, our certainty is a person who is called Jesus of Nazareth. The entire adventure of humanity's philosophical research can be summarized in one single question. It is a matter of knowing whether, in history, a man had the right to say He was God, not because this man named Himself God, but because God became man. It is not a representation, but a real event, that imposes itself on everyone as a fact that disturbs us. If Christ rose from the dead, then this concerns not only my private life and that of my community, but the whole world. It is always fascinating to discover how much Christianity has caused man to discover his unity. There are not two poles, a human one in contrast with a divine one; there is no opposition between man and God, but between the glorification of God, on the one hand, and the idolatry of man on the other (Saint Augustine, De civitate Dei). It is clear that two absolutes cannot exist. At this point, we have to return to the Bible, where man has three dimensions.
The first is the balanced management of the resources of creation: God convokes the animals and presents them to man so that he can name them. Thus, biblical man is called to achieve "dominion" over all the riches of the universe and to place them at his disposition. A Christian is not troubled by the advances of science. On the contrary, he rejoices at the power of man to discover the riches that God has placed at his disposition and thus sings of the greatness of God. The second dimension is that biblical man is always in relation with others: "It is not good that man should live alone." It is very important to note that in the second creation account, in the second chapter of Genesis, the creation of woman was not in relation to the perpetuation of the species, but to the fact that it is not good for man to be alone. Human love is the expression of the fundamentally communitarian nature of man, made not for solitude but for sharing.

BEING TWO TOGETHER. The third dimension of the biblical man is adoration. We must recognize that in every instant we are dependent on God. While I speak to you, God gives me existence. Existing, for a man, is being in relation with an Other. Existing is always being two together. Man's claim to be self-sufficient is an illusion. In the Bible, for that matter, one sees very well this rhythm of the human condition, alternating between work and adoration. After the six days of work to "dominate" the world, man is given a seventh day to acknowledge the sovereignty of God. It follows that a man without adoration is a man who is mutilated. When we reject atheist or Marxist humanism or liberal humanism, it is not to defend God, but to defend man: man without God is not fully human.
Now, the thing that our civilization runs the risk of losing is precisely this adoration. A city where you no longer see a crucifix or a bell tower would be a hell, a city where you suffocate! Science without God, technology without God puts the world in danger. It is the negation of humanism. When one speaks of the West, and of Europe in particular, one sees what it has been capable of doing. It is not a matter of the skin color of its inhabitants, because there is no superior race. The West owes its superiority to two things, science and Christianity, and today's drama is that the West has scientific and technological wealth of the highest order, while spiritually, it is rootless. One can ask whether, separate from Christianity, science might not in the end become a lethal gift. Without Christianity, it could become an instrument to reach goals that are not those of true man.

LAY "PROPHETS." The experience of the Meeting of Rimini, for me, and for the people whom I have helped discover this reality, is to be able to touch with your own hands the fact that we can go to God through the earthly realities and achievements of human intelligence, culture, technology, and science. The specific nature of laypeople is to articulate their tasks, to give a religious meaning to their worldly, secular activities. In this sense, Christian laypeople are "prophets" in the biblical sense of the word, that is, they have the job of continually remembering God's laws for society in the face of man's unfaithfulness, propagating a divine vision of the existence of man and his destiny in the face of particular situations. Therefore, one could say that the task of Christians regarding earthly commitments is to consecrate them. The great newness of recent years is that the Church affirms that we can go to God through our daily activities.

It is in life just as it is, with its beauty and its contradictions, that we must find God. Every situation, every circumstance must lead us to God. Now, if most of our activities distance us from God, it means that we are in need of conversion, and the entire spiritual life of the lay Christian is to transform this reality of our everyday life from obstacles into means for human and spiritual growth. In Europe, many of our contemporaries are attracted to Hinduism, which to their minds possesses wisdom, a unitary way of thinking and living interior harmony. But we do not need to cross the sea! We have much more. We do not seek peace in the evasion of daily life, but in a certain gaze that we bring to bear on worldly reality, received from God, and that we in turn give back to Him, and I think that this is the marvelous Christian harmony. No invention, no revolution will procure for us anything as important as Jesus Christ! He is the ultimate goal! Outside of Him there is nothing. In Him is salvation. This does not mean that after Him, time no longer exists, but that the time that follows His life, death, and resurrection is the continuation of His work of salvation that is brought forward by the Church, which is the body of Christ, until it attains His fullness. How can one not evoke Teilhard de Chardin, who was convinced that the more complex the world becomes, the more we draw close to God. In Jesus Christ, true God and true man, material and spiritual creation, the past, the present, and the future draw all their consistency. Obviously, one should evoke Saint Paul and Saint Augustine, but it is enough to say–if we pass from desire to certainty–it is because Someone came to tell us who God is and who man is and to make of us, and of all men of all times, pilgrims toward the Truth that is nothing other than the encounter we will have one day, when we will see God face to face. Then we will be able to understand that the time that passes is not something that passes, but Someone who comes.