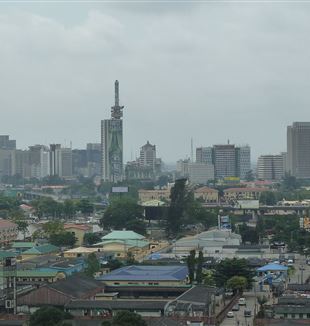 Matisse's painting of Icarus dominates the most beautiful hall in Lagos. It was November 20, 1999, and everything was ready for the presentation in the capital of Nigeria of The Religious Sense by Luigi Giussani. There was an air of expectation and ferment; everyone in the community had contributed to the event. There were those who helped set up the room, those who offered to help as hostess, those who prepared the songs, others the table of books, and others still-like Francis, Innocent, and Isaac-who organized the entire presentation, paying close attention to all the details.

In the front rows
We started out without calculation but full of certainty that in this Nigeria that is so tormented, yet rich in dreams and hope, what we have encountered is a root and a foundation. For this reason, when we made the list of invitees, we sent invitations also to the President and the First Lady… who however were not able to come. But in the front rows of the room, crowded with over 400 people, there were some illustrious personages: among them the Apostolic Nuncio Osbaldo Padilla, the Vice Governor Mrs. K.A. Bucknor, Monsignor B. Okodua representing the Archbishop, and the Italian Ambassador Giovanni Germano. In his talk, the ambassador explained the reasons for his presence: "Father Giussani is one of the most outstanding personalities in Italian culture, and it makes me proud that he is Italian. And too, I know people in the Movement, I see how they live, and thus I cannot help but be certain of the greatness of the charism that powers them."

The week before the presentation, the ambassador organized a press conference, at which fifteen national media were represented. The conference, enlivened by questions and comments, was transformed into a real encounter, anything but a formality, which kept the journalists and other interested people there for over an hour and a half. They wanted to understand what the Movement was and what it hopes to build in Nigeria.

Efficacious Instruments
The months preceding the book presentation were for us very busy ones. The ideal that accompanied us in all the preparations was that of going to the depths of our own beings, of experiencing The Religious Sense until it became a proposal for all. From this perspective, everything became an efficacious instrument toward our goal. Thus we set up the exhibitions on freedom and on morality in a room in the Muson Centre, the same place where The Religious Sense was presented. In preparing the exhibitions, we furthered our purpose by pairing panels of the show with chapters of The Religious Sense. Every afternoon during the week of the exhibition, we set a time for songs and readings. We were surprised to see that every day the same kids came back and brought new friends.

The young people of the community, who attend the University of Lagos, set up a poetry and painting contest open to members of the university, in which some 250 students participated. The day the "works" were to be turned in, we left time for a debate on what lies at the root of creativity, keeping in mind as our standard of judgment the fifth and eighth chapters of The Religous Sense, which speak of the heart and of freedom. It was not hard to invite those present to go more deeply into these themes by visiting the exhibition and participating in the presentation of Father Giussani's book. Every act, every move was a passionate search for occasions for meeting and for the construction of a place open to all the friends we have met, to seek Him who is present.

The high school students, too, threw themselves into the adventure of the exhibition. Benedict, Ruben, and William, along with Gabriella, an elementary school teacher from Reggio Emilia who arrived in Nigeria a few months ago, went around to all the schools in the area, inviting the principals to participate with their students. The older children were so enthusiastic about it that they wanted to study the exhibition so as to be guides to it.

At the same time James managed to obtain from the Minister of Education, who is a Muslim, recognition of the show as an educational activity for high schools. The work of the students led to the establishment of a small group of GS, who at Christmas presented us with their first concert.