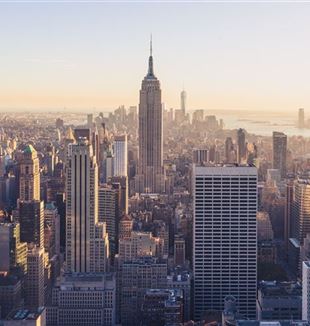 "In fact, we even said to ourselves, only slightly joking: we could just take last year’s title. It is even more relevant this year." In the America defined by Biden’s first steps, Trump’s double impeachment, by the most divisive election campaign ever, and Amanda Gorman's verses about the "unfinished nation," the theme of the 2020 New York Encounter, “Crossing the Divide”, sounded prophetic. It was easy even then to see that the country’s greatest urgency was to mend ties, that the upcoming election would only deepen the divisions hidden below the surface of the States: rich and poor, Republicans and Democrats, Black Lives Matter and QAnon, plus all the thousands of factions of a society struggling to find points of cohesion. These began to arise in the days following the Encounter, and are difficult to contain even a year later, so much so that the going ahead of the 2021 edition of the Encounter was not taken for granted. "Instead, thank God, it is going ahead," says Riro Maniscalco, Chairman of the event. It starts on February 12, completely online (the program can be found here: www.newyorkencounter.org), with a theme that we have all felt burning upon our skin in recent months: "When Reality Hits".

Why did you decide to go ahead anyway?
The desire has always been there amid the small group of organizers. This is already a grace and should not be taken for granted. But after what has happened in the past year, a sense of urgency was added to this desire. We asked ourselves several times: what contribution can we make, in this discouraging situation? I have lived here for 26 years, but I have never seen such levels of division....

What was your answer?
Ourselves. I was thinking about this precisely during the Capitol Hill events, when there was still much to organize and my days began with saying the Angelus before the Nativity and the Christmas Poster. That "another world within this world," that Giussani speaks about, is what accompanies us during the Encounter. What can we offer to everyone? Our experience. A life that, by the grace of God, is different. A life that, with all our limitations and defects, full of mistakes, is at least in momentum and open to encounter. This is what is most needed today: to have our eyes wide open, ours hearts and ears open, for us to understand that the other is a precious gift for us, as we are for them. It may seem a minimalist approach compared to the enormity of the problems that plague this country, but I think it is the only possible response: a testimony. And facts of unity, facts that show something alive and more attractive than ideological siding with one side or the other. Then, of course, alongside the urgency, we also felt impotence...

In what way?
Over time we have learned to organize a real encounter, in the flesh. What opened up before us was a completely new dimension. We turned to ours friends of the Meeting, who have always accompanied us in these years. New York is not Italy, but the challenge is the same: how to communicate a life, and the dynamics of the Encounter, even online. Take the guests, for example. We found that availability of certain speakers, paradoxically, was easier: via Zoom, even those who could not have come in person are able to connect. But we are the ones left wondering how we can really meet these people, even through a screen. The best thing about the Encounter is embracing each other, talking to each other face-to-face, seeing the volunteers. That is what always won over those who came. Let us see what happens this time. It certainly does not change our desire: to meet some people, not to listen to know-it-alls who know a lot about specific things. We would like to get to know them, and we would like them to meet each other. And that, too, is an incentive to seek other ways.

For example?
I do not know... Perhaps an instance is writing the invitation. You are less formal and you put in it what you would have said to them in person. You look for a dialogue through the modalities that are granted to you. The same goes for the technicians, the staff who were assisting us, etc. The truth is that I will participate in the Encounter very curious. If those are the conditions, I cannot change them. But life is now; I cannot hold my breath until reality changes.

Any insights into the program?
This year, clearly, it is more streamlined - you cannot drown people in an ocean of screenshots. But if I had to give a few examples, I would say Saturday's meeting, Not By Profit Alone. In a country like the U.S where success has always been an aspect of the big dream, but where right now work has been put to the test, it is important to address the economic situation. What do I work for? For whom? It would be nice if these times of great trials were to open the door to certain questions. Then, out of my own sensitivity, I would point towards the meeting on the "suicide epidemic" we are experiencing here. It is a reflection of a lack of meaning that weighs far more than practical difficulties. Then there will be contributions from Monsignor Pizzaballa, Monsignor Pierre, Charles Taylor....

What about the exhibitions?
There will be two, videos. One is dedicated to Fr. Giussani, who has always kept us company and will continue to do so again this year as well. We wanted the point of origin of everything to be clear. The other one is dedicated to Monsignor Albacete. Who knows what he would have thought of these times... The paradox is that, as happened for the Meeting, the fact of being online had opened borders: all the events this year will be simultaneously translated into Spanish. There will be watching stations in many cities; people will organize themselves to watch from home, in family or in groups of friends. In some cases, people will also be able to continue the meeting with debates via Zoom, to go deeper into certain aspects. We had not thought of that, but some friends asked and we encouraged them. When you are not sure, you learn by doing....#NewYorkEncounter