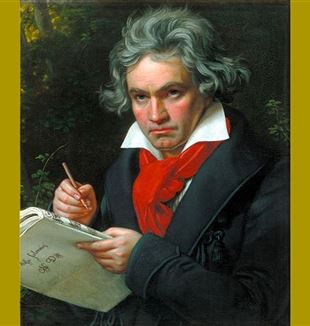 The truly ultimate theme of human existence can be summed up like this: man is born of, he receives everything from. The fact is striking that nothing that belongs to our self is ours. And yet man's greatest temptation is to think he is autonomous. This temptation is so grave as to be of the same substance as original sin.

Beethoven's concerto for violin and orchestra, that I have listened to for fifty years, since the first times when I began teaching religion at Berchet high school in Milan, has become for me the symbol of this supreme, relentless, unending temptation on man's part to make himself the master of himself, the lord of himself, the measure of himself despite all the evidence. Ever since the devil said to the woman: "It's not true that if you eat the apple you will die, rather, if you eat it you will become free, adult, you will be like God, you will know good and evil," ever since then all man's efforts have been multiplied to render himself autonomous as to culture and the dynamics of love.

But let's return to the Beethoven of almost fifty years ago. Then you could have seen in the streets of Milan a priest who went around carrying a huge gramophone. If someone had asked him, "Where are you going?," he would have answered, "I am going to school." "You're taking a gramophone to school?" "Well, the school won't let me use its and so I'm bringing mine."
One of the first things I played for the students was this Concert for violin and orchestra, with that fundamental theme running through the whole piece: the life of man, of society, is marked by the melody of the orchestra, from which the violin flees three times in an attempt at self- affirmation and three times is pulled back until it can rest at peace, almost as though it said, " Finally!" The violin — the individual — in an effort to affirm itself feels always the temptation to break away in a fleeting burst, and right in that attempt the instrument gives its best. Thus the most fascinating motifs of the concerto are the violin's, the individual who tries to affirm itself above everyone else. But the violin cannot last very long in this flight, and so it's a good thing that the orchestra - the reality of the community — is there to take it back in.

I shall always remember the shiver that went through the class when I placed this piece by Beethoven for the first time at school: the violin expressed such a yearning feeling that it truly made us bend over ourselves. This yearning was so sensitive, so strong that a girl seated in the second desk near the window onto the courtyard, burst into sobs. The class did not laugh. At the time I only said that the place of peace is where all irrational, or in any case unfulfilled, impulses of instinctiveness are recomposed: in the community. In effect, what permits the violin to carry out these three solitary, brilliant flights, the three most pacifying moments in the concerto? The support of the community, of the orchestra, to which it can return at any moment, that takes it back, follows it and grabs it back every time it runs away. The violin is man who puts his hope in his temporary strength, always conceived as isolated, more than in the common attempt dictated by a shared origin and shared destiny. However one conceives it, the autonomy of the individual cannot be right, precisely because as such it has no true origin nor destiny and thus cannot create history; it can arouse a moment of emotion in time, but immediately after ruffling the surface of the water it can do nothing, it cannot have a goal.

The yearning that the basic theme of the Concerto for violin and orchestra arouses — that provoked the sudden sobs of the young girl — is the emblem of man's wait for God.