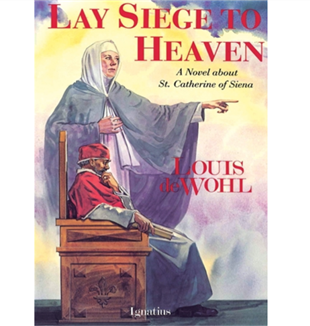 More than an invitation to read, this is intended as a warning. Meeting Catherine of Siena, in fact, involves a risk and does not leave you indifferent. What is the "risk"? Catherine had been chosen. Throughout her life, through terrible struggles and temptations aimed at distracting her from the immensity of her call, she remained faithful to that beginning, when, at only six-years-old, she understood that she would belong entirely to God. And that she had been chosen for great things. Perhaps she had no idea how great. "You... want it all, don't you?", a character asks the young Sienese nun. "Catherine nodded in silence," writes de Wohl. It was precisely this radicality, this impossibility to compromise, this insatiable hunger for what is true, that made her an uncomfortable figure. Firstly, for her family, who tried in every way to "normalize" her, educating her, planning a good marriage for her, in short, taking for granted that she too would go through the typical process of a young woman from Siena in the 1300s; for the congregation of nuns to whom she would insistently ask – until they gave in- to belong, to which she brought such an uproar that she was suspected of heresy; to the "people who mattered" in Siena, in Italy and, finally, the whole of Christianity. She even had the ardour and was bold enough to address the Pope. They tried in every way possible to reduce the overwhelming impact that this slender and ardent girl threatened to bring into their lives. The letters, some of which are quoted by de Wohl, which Catherine sent to the powerful in the world, leave one amazed by their strength and frankness. And no foolish mockery, no well-constructed preconceptions, no empty and vain comments or gossip, could prevent the fire that Catherine had inside her from burning, generating crises, that is, new judgments, that pushed, even dramatically, those who came across her to ask questions, to change their gaze and life.

That fire burned to the point that Catherine, aware of her own smallness, but no less determined for that reason, did not hesitate to throw herself into the fray of reality, into whatever aspect presented itself: from the events with the friends and poor around her, to the plague epidemic, to Sienese and Italian politics, to the great question of the Papacy in Avignon. One could not hide in front of her: you could try to justify yourself, but Catherine was not content with half measures, she sought the measure of Another. She even challenged God: "Lord, you promised me that nothing of mine would be lost. Is this how You keep your word?"

Read also – “A festival of humanity”

Who among us does not want it all? Catherine poses a challenge at this level. It is impossible not to feel attracted to her, to feel the desire to risk everything by following the same lust for life that was kindled in her heart and that dwells, perhaps sometimes dormant, in each of us. That is why this is a warning: "Fearlessly enter into this battle...” "If you are what you must be, you will set fire to the world." Shall we let Catherine's words resonate within our hearts? And if we do, what will happen?

Book profile
Books for GS: A crystal from millions of moments