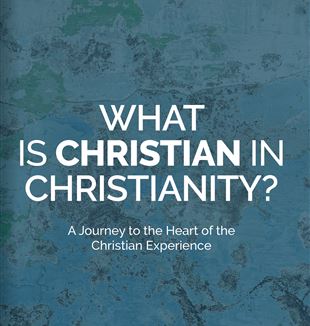 I had the opportunity to read the collection of writings and speeches by Msgr. Lorenzo Albacete recently published by Human Adventure Books, What is Christianity? A journey to the heart of the Christian experience.

I said “read” but I should have said “devoured” (Lorenzo might have liked this expression better), as it was another occasion to be in the company of someone who had no problems whatsoever asking tough questions.

“What do you want? What are you looking for?” he asked at the beginning of a Priest retreat in 2008. But these are the types of questions that could have easily been asked of all of us. And, indeed, these are the very questions an at-the-time-little-known Nazarene asked a couple of seemingly clueless guys on the banks of the Jordan River many years ago.

For Lorenzo--whom I had the good fortune to know personally--the entire Gospel was the interplay between the answer to these questions and Christ, as well as the path to the recognition of our true desires. In What is Christianity? he suggests that if you do not live within the context of these questions, everything else will be entirely theoretical and abstract.

Instead of writing a book review, then, I’d rather provide a glimpse of some of the questions that Lorenzo poses and discusses in his talks.

“What do you want for yourself, not only of this week, but of your life? Your life is human. What do you want so that you can have some satisfaction, for however long it is (and it is always too short) of one’s passage through existence? If, at the end, you want to pass a judgement on yourself, what would make you have a positive judgement on your life? Would not you want something at least to have been accomplished? If this question concerns our human existence as such, it also concerns our reality…” (pp.103-104)

If these words sound too theological, rest assured that Lorenzo does not grant complicated answers:“I just want to have a good time,” he says of his own desire. (p.105) The book is, in fact, filled with many concrete examples of how reality is given to us to awaken such a desire.

Reading this book is quite unlike listening to a lecture. Rather, I would liken it to holding an engaging conversation with a wise old--but very much young at heart!--friend about education, politics, or culture--in short, reality. And with someone who fully understood and embraced the teachings of Father Luigi Giussani and who we firmly believe is enjoying his company right now.