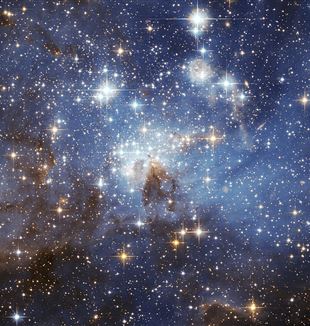 One of the things that can happen at the Meeting is what happened to George Smoot, surprised and curious as a child, getting excited by the special effects presented by Euresis in the exhibition Light, Eyes, and Meaning, recognizing the originality of an experience like that of vision, so familiar to each of us yet irreducible to its physical, biological, and neurological components. Smoot won the Nobel Prize for Physics in 2006 for his discoveries that have brought us a little closer to the truth contained in the “Wrinkles in Time” (also the title of one of his books). Introduced in Rimini by his friend and colleague astrophysicist Marco Bersanelli, Smoot told of the adventure that has enabled us to “see” the first glimmerings of the cosmos, those subtle ripples of background radiation that were the seeds of the spectacular cosmic flowering of stars and galaxies.

The American astrophysicist was the outstanding guest of a Meeting that lined up a carefully balanced scientific team to back up some of the world’s leading scientists and multiple-prize winners, like Enrico Bombieri and Laurent Lafforgue, winners of the Fields Medal (the equivalent of the Nobel Prize in mathematics), Balzan Prize winner Xavier Le Pichon and Templeton Prize winner Paul Davies. Besides, the theme of the Meeting could hardly help stimulating scientists, engaged as they are in the arduous struggle to make the truth emerge from mathematical objects or natural phenomena. If they are to attain their goals, they have to be strongly convinced that something will emerge, that there is something to be revealed and understood.

Bombieri is convinced of it. He is working on the Riemann Hypothesis (which sees an order in the apparently chaotic distribution of prime numbers), “a task that has fascinated me for forty years. Perhaps one day I will succeed in confirming this hypothesis. I already know it’s true, but how it can be demonstrated, I have no idea.” Pichon sees the scientists’ work as responding to “humanity’s need to understand where they are, to dialogue with the world. One of the greatest pleasures of the scientist is to succeed in engaging in a conversation with nature, being able to ask her certain questions, and when you ask the right questions, then nature responds.” Their work entails being faithful to the truth, even accepting the challenge of a superabundant reality ready to destroy all prior plans and models. “When does it become falsity?” asked Bombieri. “When you persist in not wanting to accept the evidence, when you refuse to examine and re-examine what you know. At this point, things become difficult and the truth disappears.”

The paradoxes of Lafforgue
Mathematicians illuminate this process best. It is significant that one of the talks that made the deepest impression in Rimini was Lafforgue’s. One of the paradoxes that reveals the fully human and humanizing character of mathematics is that it seeks to clarify the reason for things in such a way as to eliminate any fracture between explanations and our representation of the objects affected. So it happens that mathematical texts “have the force of evidence; they give the impression that the explanations are so clear that they must have always existed.” Lafforgue does not mince words when he turns to the teaching methods being used today, and his criticisms have placed him in the limelight. He finds the cause of the disaster in the undermining of the objective notion of truth, “which is the mirror of the concept of the subject, the person.” And he does not hesitate to declare that mathematics “is human because it is difficult.” The inhuman does not lie in difficulty, but in a superficial facility that fails to respect the object and hinders true knowledge.

So, in the end, the floodlights on science at this Meeting produced a further effect of perspective by placing man in the foreground, with his desire for an encounter with the truth.

Photo by ESA/Hubble [CC BY 4.0], via Wikimedia Commons