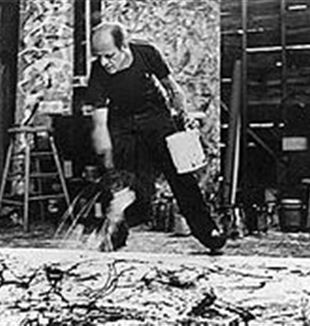 “We can no longer paint men playing the cello or bunches of flowers: the subject is the prime element of painting; the history of my generation begins with the problem of what to paint.” This declaration by Barnett Newman catches the essence of the watershed in the history of art at the end of the Second World War. For the first time, for many historical reasons, the center of gravity had moved outside Europe, and New York had become the Lighthouse City, thanks partly to the fact that many artists had emigrated there to escape the dictatorships that had truncated the freedom of the old continent (three of the greatest exponents of the New York School are not Americans: the Russian, Mark Rotko, the Dutchman, Willem de Kooning, and the Armenian, Arshile Gorki). Even the CIA had a hand in it. They had smelled the danger of a Communist cultural hegemony and had financed and encouraged the more extreme forms of American art, in order that they could impose a trend and rob the enemy of its predominance. So it happened that, thanks to extraordinary financing, anarchic artists, detested by the moral majority of the time, had become successful in a very short time. The calculation, however shocking, proved to be a very clever one. There was a need to oppose the collectivist ideal that the Soviet Union was trying to export with the cult of individual freedom that lies at the basis of American society.

Shock and Consensus
Already in 1948 and in 1950, the Venice Biennial Exhibition saw the triumph of the American pavilions, where artists like Gorki, Rotko, de Kooning and the great Pollock had been introduced to the art world. The shock and consensus were immediate, so much so that Life Magazine devoted a cover to the scandalous Jackson Pollock, with a title that sounded ironical, but not too ironical: “Is he the greatest American artist of our time?” For the first time in its history, the United States was the avant garde school . It was a real school, since the New York group set itself up formally on the pattern of the groups that had radically renewed European art in the first half of the century. The school, opened in 1948, was called Subjects of the Artist, a name suggested by Barnett Newman. They had free, evening courses, held by the four artists who had been the first to join the project, whereas Fridays were conceived of as open sessions of comparison to which outsiders were also invited.

The real motor of the New York School, though, was the system of galleries–in particular, those directed by two great protagonists of the American cultural scene in those years, Betty Parsons and Peggy Guggenheim, and that of Leo Castelli. People of great culture, with a taste for challenge and at the center of the highest level of society, they had immediately adopted and nurtured artists who, without their help, would certainly have had great difficulty in breaking into the market. Thanks to their ability, the New York School became at once a point of reference for young artists from all over the world in search of new horizons and new perspectives. If Europe was hostage to the Picassian style and the traumas of war, America was asserting itself as the new world of art.

Modena, Turin and Venice
Now who were these artists who had grabbed the attention of the world in just a few years? They are famous names, which the Italian public can rediscover first hand thanks to the fortunate coincidence of three exhibitions in Modena, Turin and Venice. In Modena, with the collaboration of the Guggenheim Museum, there is an exhibition that presents a broad view of the phenomenon. In Turin and Venice, the attention is focused on two masters of the New York School, Franz Kline at the Castello di Rivoli in Turin and William Baziotes at the Guggenheim Museum in the Venice Laguna. The visitor will notice how central is the affirmation of Barnett Newman quoted above; the thread running through the experience of many painters of such varied poetical temperaments is that of a different relationship with the work. Robert Motherwell, one of the most charismatic personalities of the group, synthesizes this thread: “A painter… discovers at times that the picture was not painted by him, but rather it is the picture that has painted him, that he, who thought himself the subject, has become the object, that the picture knows him more than he knows the painting.” Things were really turned upside down, as the experience of the most celebrated of the terrible boys of New York, Jackson Pollock, testifies. He was the one who invented dripping, the technique of dripping paint onto canvases lying on the ground. It was he who gave rise to the name with which the movement passed into history: Action Painting, which is also the title of the Exhibition in Modena. Harold Rosenberg, the philosophical and critical mind of the group, writes, “At one point American artists, one by one, began to consider the canvas as an arena in which to act, rather than a space in which to reproduce, repaint… So the canvas is not the support of a picture, but an event.” So life, like a cyclone, had once more overstepped the rules of art, opening up new perspectives full of risks and enormous suggestion. 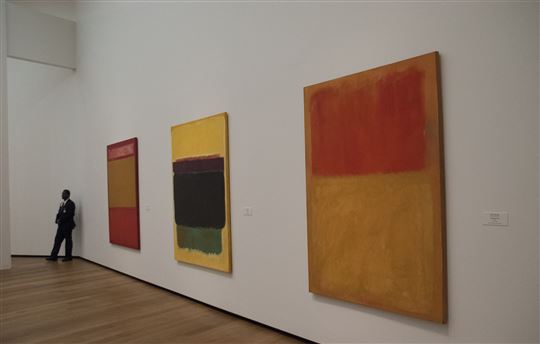 “ Automatic” Painting
But we must be careful. A too vitalistic vision of the works of the New York masters is misleading. In the short circuit that led them on such anti academic roads, chance never actually prevails. Even Pollock’s dripping–that in its intentions was sold as “automatic” painting–is painting kept always under control, in which the artist, though annulling the distance between himself and the work, always knows where he is going. As Clement Greenberg wrote, the day after the exhibition in which Pollock presented his celebrated and sumptuous Number 1A (now kept at the MOMA in New York) in Betty Parson’s gallery in January 1949, the painting “as a whole is well contained within the canvas, as some works of the fifteenth century masters.” And what can be said of the extraordinary painting by William Congdon (at the end of the forties he was a member of Betty Parson’s stable) present in the exhibition in Modena, entitled Winter Morning, if not that, in the apparent and dramatic fragmentation of the image, in its imminent falling to pieces, everything is held in miraculous, but highly controlled, equilibrium? But the proof that the grand masters of New York have the chromosomes of the classical masters in their DNA is in the work of the greatest of them all, Mark Rotko. The author of often immense paintings, composed only of solemn chromatic backgrounds (two of them from the sixties are in the Modena Exhibition), Rotko emerges from his hand-to-hand fight with the canvas with the authority and the immensity of a classic master. In his apparent tabula rasa approach, his painting actually links up with the past, as can be grasped by anyone who has set foot in the room at London’s New Tate which presents the enormous canvases conceived for the New York Four Seasons. Those scant canvases, immersed in silence, make up a colossal whole, images that rise to the surface of time, from unheard-of depths.