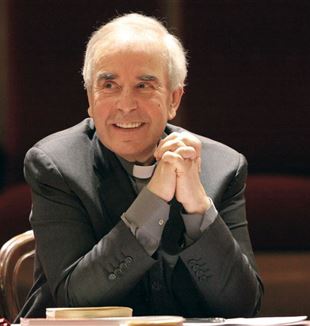 On April 19, 2012, at the age of 66, Don Giacomo Tantardini died in Rome. Lombard by birth and Roman by adoption, a disciple of Don Giussani, Don Tantardini made the desire for a Christian life vibrate for 40 years, especially among people and environments (universities, the world of work and the media) that were completely or almost completely alien to it. We remember him through the testimony of one of his former “young people”.

I met Don Giacomo in November 1972. He was twenty-six years old and had just been in Rome to study, as a guest of the Pontifical Lombard Seminary, opposite the Basilica of Santa Maria Maggiore. It was the most important encounter of my life. I thought I had definitively abandoned the Catholic Church, like many of my peers; the restlessness of that time was pushing us towards other shores that seemed more attractive. I met him by mistake. They had told me about a "community" where communist ideals were lived "here and now", and out of curiosity I went to one of their meetings. I had never met a priest like him; he had a greater impetus for life and a non-conformist spirit than those of us who considered ourselves revolutionaries. He was a free man and a happy priest. He spoke to our desire for happiness. But what was most surprising was something else, which at first I did not know how to define. For him, Christ was not a human ideal, He was a presence, mysterious and real, a Face he could speak to with affection, like a living person, like the most beloved person. I sensed this, as did all of us who followed him, from the way he prayed and celebrated Mass. He was not a mystic but when he prayed it was as if he saw the Lord. He taught us to sing Iesu dulcis memoria, making us rediscover the powerful beauty of medieval chants, which seemed to me to be more modern and close to the heart than the melodious songs I had heard in church.

"Nec lingua valet dicere Nec littera exprimere Expertus potest credere Quid sit Iesum diligere." Only those who experience it can believe what it is to love Jesus. Don Giacomo had experienced it. Thanks to the faith of his mother, thanks to the encounter with Don Giussani, the founder of Communion and Liberation, whose faithful and beloved son he was. Thanks to the Grace of God. He communicated this love to us, not through speeches, but with his gaze, his irony, the affection he had for each of us, just as we were. And so, in the 1970s, amid so much naivety, ideological contamination, exaggerated militancy and blows from the left and right, you would come across Don Giacomo with a group of university students praying on Sunday afternoons in the convent of the Little Sisters of Jesus in the oleander wood at Tre Fontane or in the convent of the Sisters of the Assumption overlooking the lake at Genzano. It was a marvel to pray and see him pray in those places of silence and peace.

It was also a grace to witness the incredible phenomenon of dozens, then hundreds, then thousands of people who, following the experience of Don Giacomo, discovered the Christian faith from scratch or returned to it in a more conscious and interesting way for their lives, precisely at a time when churches were being depopulated by young people. How many lives were saved, how many bonds of friendship and true fraternity were established thanks to this river overflowing from the actions of the good Lord. Lasting relationships. And what a miracle within a miracle was the experience of those young people who, attracted by his testimony, began to think of the ideal of virginity as a gift for their own lives: not as self-castration but as fullness, even sentimental. Don Giacomo’s purity was that of a child, and this too, in my eyes, was something from another world.

And what cultural richness. Thinking about it now, it was extraordinary that so many ordinary young people on Sunday afternoons in the dark seventies, preferred to hear him read Charles Péguy in a room of the Dominican convent at the Pantheon, to nightclubs or violent demonstrations. Not to mention, then, in the last years of his life, the crowded lectures on St. Augustine at the University of St. Pius V in Rome and at the State University of Padua. It was not a display of erudition but an openness of the heart and mind in the face of the present reality.

Many social, charitable and editorial initiatives were born as a "side effect" of Don Giacomo's faith. Personally, I was able to experience the season of Il Sabato and 30Giorni. I remember memorable disputes, such as that on the return of the ancient Pelagian and Gnostic heresies to contemporary Catholicism. Don Giacomo was the soul of it, a volcanic mind irreducible to secularist and clerical schemes. For those of us who knew his sufferings, it was very moving when an echo of those contents appeared to resound in the very heart of the Church. Cardinal Ratzinger's speech at the Rimini Meeting in 1990, while Il Sabato was under fire for the controversy over Pelagianism in the Church, was unforgettable, that is, the reduction of faith to morality and the eclipse of grace. "Pelagius' error is much more current than it seems, and Il Sabato has already said important things on this subject," the prefect of the former Holy Office replied to a question from journalists.

Cardinal Bergoglio was also a subscriber and read 30Giorni carefully. I was witness, along with many other friends, to various meetings between him and Don Giacomo. It was precisely a journalist from 30Giorni, Gianni Valente, who first met the archbishop of Buenos Aires. When he came to Rome, Bergoglio willingly went to dinner at the home of Gianni and his wife Stefania, and he concelebrated the Eucharist several times in the basilica of San Lorenzo al Verano where Don Giacomo’s friends gathered for mass on Saturday afternoon. Cardinal Bergoglio was particularly fond of him and wrote a beautiful recollection of him in 30Giorni when, ten years ago, on 19 April 2012, Don Giacomo left us. As Pope, he then agreed to also write a preface to the reprinting of the booklet Chi prega si salva [Those who pray save themselves], the work Don Giacomo cared most about. This was born out of the need to offer a simple and useful tool to those of us who were approaching the sacrament of confession for the first time or returning to it after a long absence. It is also a compilation of the most beautiful prayers of the popular Christian tradition, which he made us rediscover and love. Don Giacomo often insisted that Christianity is "a simple story". So that simple little book – disseminated across the world – now has a double preface, one signed by Cardinal Joseph Ratzinger and the other signed by Francis. Don Giacomo, up there in heaven joyful with Don Giussani, reading all these lines of praise would now tell me that it is time to stop and rather say a Hail Mary for him. But it is us who are now asking him for this prayer, for our lives, for the whole world, for the Church of the Lord.